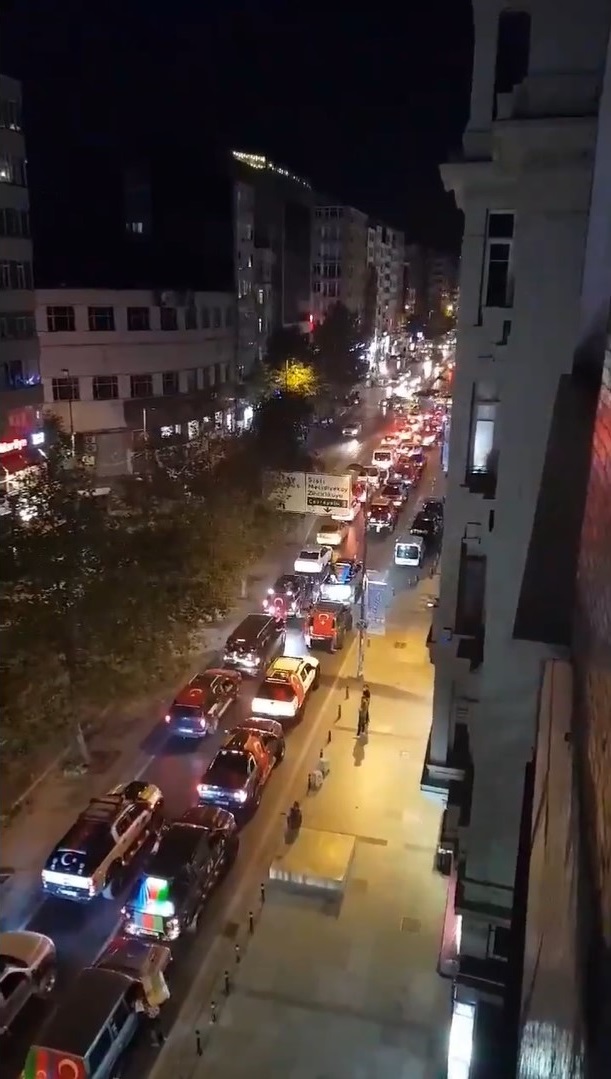 Since the outbreak of the wide-scale clashes between Azerbaijan and Armenia on 27 September due to the Nagorno-Karabakh conflict, we have witnessed the publication of a number of misleading or outright fake news targeting not only Azerbaijan, but also Turkey.[1] News reports with such problematic content seem to be especially prevalent amongst Western news outlets, which have been observed to give a lopsided coverage of the ongoing clashes between Azerbaijan and Armenia. This news coverage paints Armenia as the victim (despite its ongoing occupation of Azerbaijan’s internationally recognized territories) and Azerbaijan as the aggressor (despite the fact that it has limited its military operations solely within the scope of retaking its territories under Armenia’s occupation). Turkey, because of its support for Azerbaijan, is being painted as the aggressor as well.[2] A news report by France 24 titled “Turkish ultranationalists storm Armenian neighborhoods in Istanbul as fighting rages in Nagorno-Karabakh” seems to be the latest example of this Western media trend that either intentionally or unintentionally portrays Azerbaijan and Turkey in a negative light.

Before delving into the aforementioned news report, it will be beneficial to briefly introduce France 24 and its The Observers program. France 24 is a French state-owned international news television network based in Paris broadcasting in French, English, Arabic, and Spanish. It is the French equivalent of the British BBC World News and German Deutsche Welle. France 24-The Observers program is said to be both a website and a TV show focusing on international news. According to the program’s website, it aims to “cover international current affairs by using eyewitness accounts from ‘Observers’ - that's to say people who are at the heart of an event. They send us photos and videos, which our team of professional journalists in Paris verify and contextualize.”[3] It is further stated that: “Our journalists analyze and verify photographs and videos that have been widely shared online, but that may have been faked, manipulated or taken out of context.”[emphasis added]

On the website of France 24-The Observers, a news report was published on 15 October under the section of “separatism” with the title “Turkish ultranationalists storm Armenian neighborhoods in Istanbul as fighting rages in Nagorno-Karabakh.”[emphasis added][4] The report was also included in the French 24 Twitter account. It contains an image said to be taken from a video posted on Twitter on 5 October. The subtitle of the image states that it is “showing a group of Turkish ultra-nationalists storming Kurtulus, a neighborhood in Istanbul that is home to a large Armenian population.” The report mentions that “The cars are draped with Azeri and Turkish flags. The scene took place on Halaskargazi Avenue, one of Istanbul’s main roads.”

The report additionally mentions that “On September 28, the day after fighting broke out in Nagorno-Karabakh, a similar convoy drove into Kumkapi, another Armenian neighbourhood in Istanbul where the Armenian Patriarchate is located,” and states that two Armenian churches in İstanbul were vandalized in May 2020.

Before getting into the criticisms of the wording and content of this report, an important disclaimer must be made here to prevent misunderstandings. Ordinary people or citizens of any country, regardless of their background, ethnicity, or religion, should never be targeted in any way for political or military conflicts that they have no control over. This is a moral imperative that applies to everyone.

Getting back to report by France 24/The Observers, it has several problematic aspects that must be discussed:

1) The punch line of the report’s message is hidden in the word “storm”. In the context of this news report, the dictionary meaning of the word “storm” is: “a violent assault on a defended position.”[5] Despite the wording in the report’s title and text, watching the video concerning Halaskargazi Avenue reveals that no violent attack actually occurs; as in, no one is attacking people’s homes or businesses, or shouting discriminatory chants against Turkish Armenians. As such, the word “storm” cannot be used in this context and its use constitutes sensationalist journalism.

2) In the context of the Halaskargazi Avenue convoy, there are indeed many Turkish Armenians living in the Kurtuluş neighborhood, which is in the Şişli district that also contains the Halaskargazi Avenue that the car convoy passes through in the video. However, the Şişli district is one of the most central areas in Istanbul, which is a cosmopolitan megacity with a population of 16 million. Şişli has registered population of about 300,000, but is estimated to have a daily population of over three million, since it is not just a popular residential and commercial area, but also a hotspot for entertainment venues and hotels providing accommodation for tourists.[6] Furthermore, the Halaskargazi Avenue is one of the main arteries for Istanbul’s traffic flow. In such a megacity, it is misleading to label any district or neighborhood as an “Armenian neighborhood”, considering that the population of the Turkish Armenians (most of whom live in Istanbul) is about 60,000. In such a context, the authors of the news report have portrayed the convoy as targeting Turkish Armenians without providing convincing evidence.

3) In the context of the Halaskargazi Avenue convoy, the word “ultranationalism” has been used based on assumptions and without giving thought to the meaning of this word. “Ultranationalism” means “radical loyalty and devotion to a nation: extreme nationalism”[emphasis added][7] or “extreme nationalism that promotes the interests of one state or people above all others”.[8] A person draping their vehicle in a county’s flags and protesting about a political issue may signify that s/he is a nationalist, but this action alone is not enough to consider someone as ultranationalist, meaning that person is radical or prone to extremist actions. If we are to apply France 24’s assumptions elsewhere, then the Armenian groups waving the flags of Armenia and the illegitimate Armenian regime in Nagorno-Karabakh and protesting in front the European Parliament[9] in Brussels or shutting down Belgian motorways[10] must also be considered ultranationalist. After all, these protestors seem to be highlighting the supremacy of the Armenian cause in the Nagorno-Karabakh conflict and place the entire blame of this conflict on Azerbaijanis and Turks. Would France 24 be willing to label these Armenian protestors as ultranationalist?

4) The convoy that passed through the Kumkapı neighborhood of the Fatih District is a separate matter. Unlike Kurtuluş/Şişli, Kumkapı is neither a popular nor a central place in Istanbul. Furthermore, the Armenian Patriarchate of Istanbul is located in this neighborhood. In this context, the convoy’s passage by the Patriarchate can be interpreted as “sending a message” to Turkish Armenians, which makes this an act that must be denounced. Indeed, in the same day (28 September), Turkey's ruling Justice and Development Party’s spokesperson Ömer Çelik made a to the point statement:

“We strongly condemn Armenia’s attack against Azerbaijan. We will continue to stand against this unfair and illegal act. We will never allow the Armenian citizens of the Republic of Turkey to be threatened or harassed by anyone either through social media or other venues. […] The Republic of Turkey will not allow discrimination amongst its citizens. Whatever the reason might be, those who are trying to engage in discrimination amongst our citizens are those who wish to do harm to our country. Those who are trying to shift our resolute stand against Armenia to other areas are seeking to engage in provocation. No one can engage in provocation against the social fabric of Turkey. […]”[11]

5) The news report by France 24-The Observers lastly mentions the vandalization of two Armenian churches in İstanbul. However, it seems that France 24-The Observers journalist have failed to follow up on these two incidents, as the perpetrators of both incidents have been apprehended and incarcerated. The vandalizer of the Armenian Church in Üsküdar was handed a 1-year and 4-months prison sentence for the crime of “damaging places of worship and cemeteries”. The vandalizer of the Armenian Church in Bakırköy is reportedly mentally unstable and his trial seems to have not been finalized yet. The omission of such facts by France 24-The Observers will lead the average reader to assume that people can casually stroll up to Armenian churches in Turkey’s largest city and vandalize them without consequence. France 24-The Observers’ omission is even more glaring since even Armenia’s news outlets (despite being traditionally anti-Turkey) have reported on developments concerning these two incidents.[12] One Armenian media outlet even shared Turkish authorities’ assessment on these incidents; “Concerning the goal of these sensational actions that were perpetrated within the same period, Turkish intelligence units ‘are of the view that [these actions] are being directed by dark hands trying cause great chaos in the country’.”[13]

France 24-The Observers claims to place importance on verifying stories and giving correct context to provide accurate news to its readers. It even has a section on debunked stories on its website.[14] Furthermore, France 24 claims in its “Fight the Fake” section that it is “[…] dedicated to providing news that is based on facts. Impartial, factual reporting is the best weapon against all kinds of fake news: rumour, propaganda and clickbait.”[15]

BBC provides explanations for two possible forms of fake news. One of them pertains to France 24-The Observers’ news report:

“Stories that may have some truth to them, but they're not completely accurate. This is because the people writing them - for example, journalists or bloggers - don't check all of the facts before publishing the story, or they might exaggerate some of it.”[16]

In the case at hand, France 24-The Observers, either through sloppy journalism or ill intent, has prepared a “news report” that omits important facts, fails to provide proper context, and uses exaggerations that in sum mislead its readers. In other words, this news report by France 24-The Observers constitutes a fake news. This is even more disturbing considering that France 24 boasts about “fighting the fake”. Fake news is rapidly becoming a global problem with serious political and social consequences. The constant propagation of fake news is eroding people’s trust in social institutions, politics in general, and journalism, which is profoundly dangerous because such distrust and eventual paranoia will the pave the way towards radicalization. In this context, fake news by a news organ claiming to fight fake news is the last thing the world needs right now. 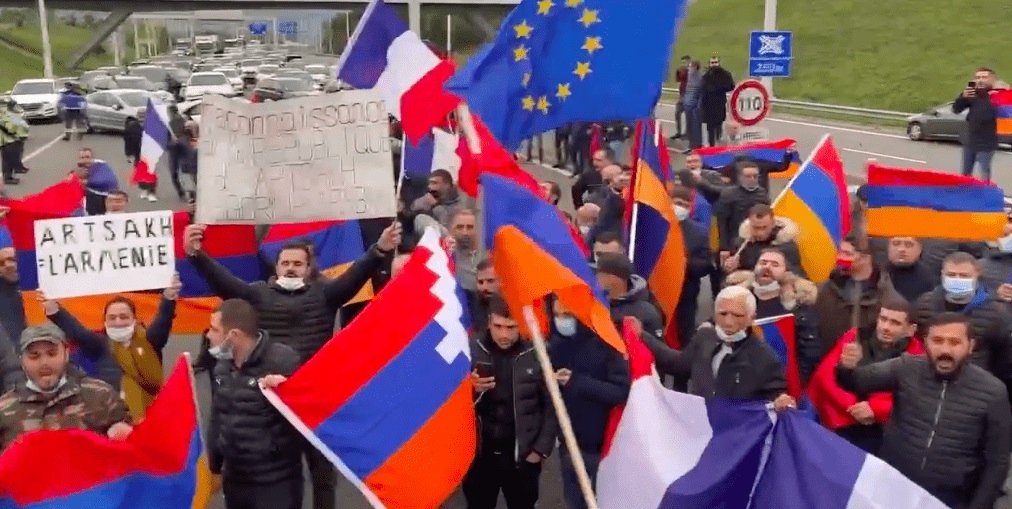 Armenian protestors block a Belgian motorway to draw attention to their views on the clashes between Azerbaijan and Armenia over the Nagorno-Karabakh conflict - Source: The Brussels Times 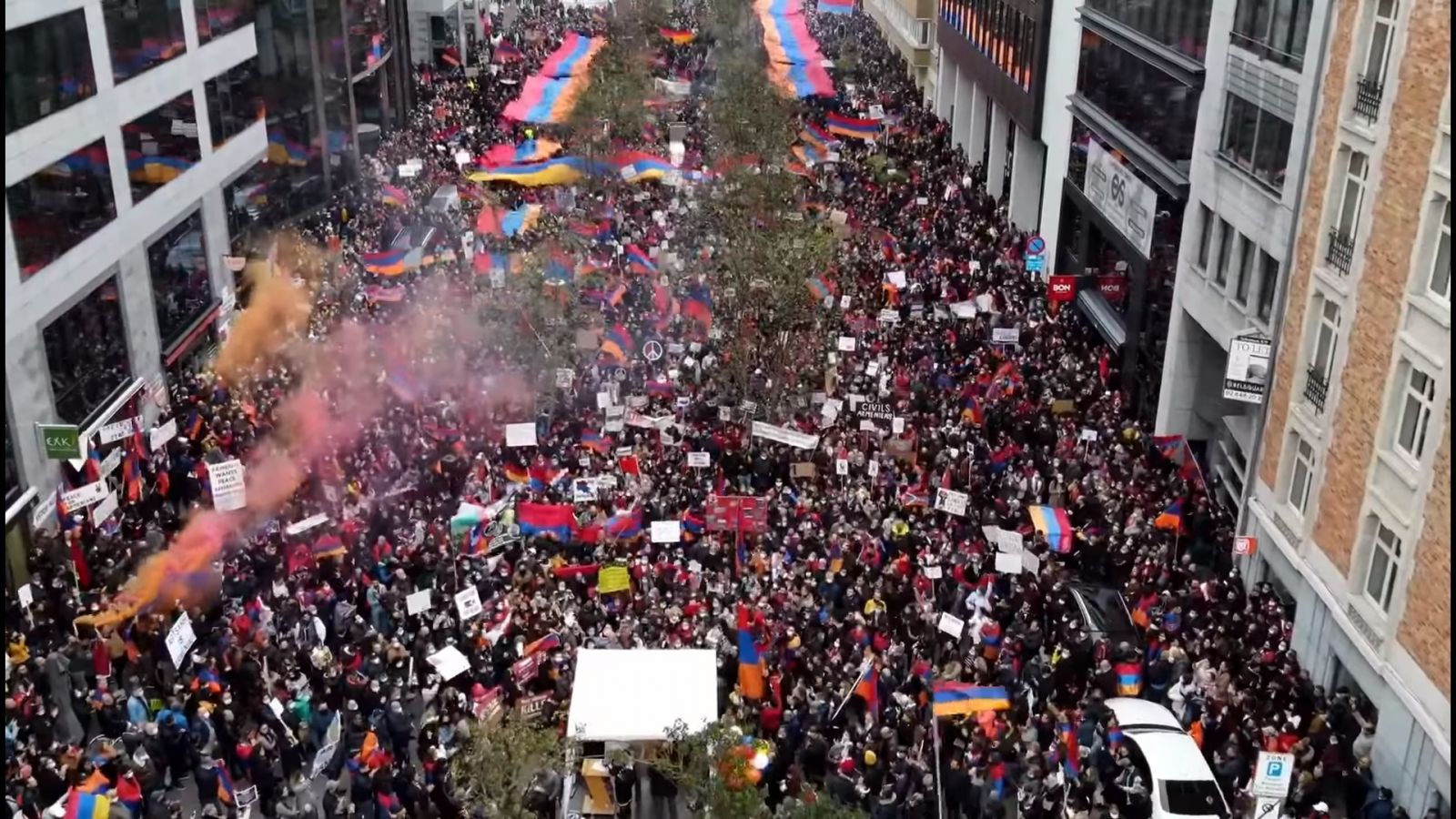 Armenian groups holding a demonstration in Brussels to draw attention to their views on the clashes between Azerbaijan and Armenia over the Nagorno-Karabakh conflict - Source: ArmenPress

[2] There may be several reasons for this unfair coverage. One reason might be Turkey’s currently strained relations with the United States and the European Union over political differences on key regional developments and the West’s aversion to what it has historically viewed as the “adversarial Muslim Turk”. Another reason might be the intense lobbying of well-established diaspora Armenian groups in various Western countries, especially in the United States and France.