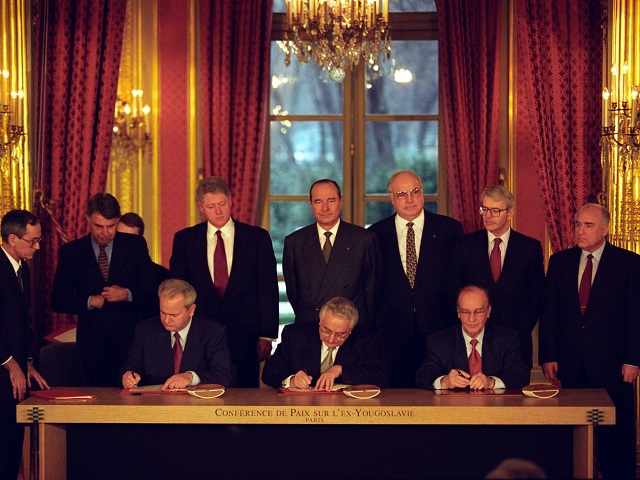 Peace Implementation Council, its Steering Board and the “Bonn Powers” of HR

Following the signing of GFAP, a Peace Implementation Conference was held in London on 8-9 December 1995 to ensure the sustainability of the agreement. As a result of the meeting, it was decided to establish a Peace Implementation Council (PIC). The PIC consists of 55 countries and organizations that in different ways support it.[2] There are also observer states. The London Peace Implementation Conference also established the Steering Board of the PIC to work under the chairmanship of the High Representative as the executive arm of the PIC. The Steering Board members are Canada, France, Germany, Italy, Japan, Russia, United Kingdom, United States, the Presidency of the European Union, the European Commission, and Turkey (representing the Organization of the Islamic Conference).

PIC, in its meeting held in Bonn in 1997, welcomed the High Representative’s intention to use their final authority regarding interpretation of the Agreement on the Civilian Implementation of the GFAP to facilitate the resolution of difficulties by making binding decisions, as they judge necessary. As noted above, “final authority” terminology is contained in Article V of Annex 10. In this respect, paragraph XI.2 of the Conclusions of the Peace Implementation Conference held in Bonn on 9 and 10 December 1997 stated that the HR can make the following binding decisions:

The above measures have been used frequently by various High Representatives in the past. The use of this authority is usually referred to simply as the “Bonn Powers”. There is no doubt that these powers, legal aspects of which are discussed and criticized in the doctrine extensively, have a sui generis character. It is possible to consider these powers as an example of using extraordinary methods to contribute to international peace and security under extraordinary circumstances. There are legitimate legal opinions claiming that the PIC cannot delegate such powers to the Office of the High Representative (OHR), as the OHR is not a subsidiary of the PIC. Since the PIC decisions regarding these powers were referred to in the UN Security Council resolutions, there are also opinions that linking these powers with the Chapter 7 of the UN Charter as well as the views that strongly criticize this approach. A uniform example of such statements contained in many UN Security Council resolutions in this respect is presented below:

Reasons for Failed Attempts to Close OHR Since 2006

When the past efforts of the PIC are examined, it will be seen that the integration of BiH into the Euro-Atlantic structures and the completion of the necessary reforms by the country's administration for this purpose are the main goals of the international community. In this context, Political Directors of the PIC Steering Board agreed at their meeting in Sarajevo on 22 June 2006 that it was in the interest of all for BiH to take full responsibility for its own affairs. To this end, it was decided that the OHR will immediately begin preparations to close on 30 June 2007. The Steering Board agreed also to review and confirm in early 2007 the OHR closure, considering the overall situation in BiH and the region. It was further decided that the Steering Board will then seek endorsement of such closure by the UN Security Council.[5] However, due to adverse developments in BiH, this decision could not be implemented, and a new decision had to be taken in 2008. In this context, in the statement published following the Political Directors of the PIC Steering Board meeting held in Brussels on 19 November 2008, it was stated that the OHR could not be closed unless the determined reforms were realized, and it was emphasized that the frequent challenges to the constitutional order of BiH and, in particular, to the sovereignty and territorial integrity of BiH or to the existence of the Republika Srpska as one of two entities under the Constitution of BiH are unacceptable.[6] It should be underlined that these separatist threats always come from the Republika Sırpska administration. The following last paragraph of the mentioned PIC Communique represents a strong response to these threats:

“BiH is an internationally recognised sovereign state whose territorial integrity is guaranteed by the GFAP. The Steering Board underlines that the International Community retains the necessary instruments to counter destructive tendencies and that it will not allow attempts to undermine the GFAP, whether from inside or outside the country. The OHR will continue to ensure full respect for the GFAP and to monitor progress in respect of the objectives and conditions and the PIC Steering Board will keep the situation under constant review.”

It cannot be said that there has been a substantiative improvement in the stability of BiH, or that the threats to the territorial integrity and sovereignty of the country have subsided in the nearly thirteen years since 2008. One of the latest examples of this is the decision taken in the Republika Sırpska National Assembly (RSNA) at the end of 2019 on the right to self-determination and NATO membership. In this regard, according to press report, the set of conclusions adopted by the mentioned assembly affirmed the right of self-determination of RS, reaffirmed RS’ opposition to accession to NATO, and stressed that “in the event of a violent attempt to join Bosnia and Herzegovina with NATO, Republika Srpska will hold a referendum in which citizens will decide on Republika Srpska’s membership of any military alliance.”[7] In response to this separatist decision, the Ambassadors of the PIC Steering Board made a statement on  13 November 2018 and  underlined, among others,  the following  crucial points for BiH sovereignty, constitutional system and territorial integrity:

Turkey, as a member of the PIC Steering Board, is a party to this statement. However, according to the footnote in the statement, one of the members of the Steering Board, Russia, announced that it disagrees with the statement. It is possible to say that this declaration of disagreement by Russia bears importance in terms of future developments in BiH.

What could happen in Bosnia and Herzegovina in the coming period?

Valentin Inzko, an Austrian diplomat who has been serving as High Representative in Bosnia and Herzegovina since 2009 is expected to complete her tenure in the upcoming period. According to press reports, Germany is considering nominating an MP from the Christian Social Union in Germany, Mr. Christian Schmidt, a former junior minister in the Ministry of Defence and former minister of agriculture, as the next head of the Office of the High Representative.[9] There is a strong possibility that Germany's idea of nominating a strong candidate for this post stems from its grasp of the seriousness of the negative developments in BiH.

According to press reports, current Russian Ambassador to Belgrade, Botsan Kharchenko, who was the former Ambassador to BiH and served as Russia’s representative for many years in the PIC Steering Board, said to the press that "the shutdown of the OHR should be discussed, and not the appointment of a new High Representative." He also stated that “Moscow did not approve the attempts of appointment of a new chief of OHR” and recalled that “the appointment of the OHR is not possible without a decision and confirmation by the UN Security Council, where Russia has veto power.”[10]  Similarly, the parliament of the Republika Srpska has very recently called for the closure of the Office of the High Representative. As per the press reports, Milorad Dodik, the Serb member of the Presidency of BiH, addressing the parliament said that;

“Twenty-six years on from the war we are living under a protectorate. Most of the problems we are dealing with come from the actions of the High Representatives and the so-called international community. It is time for the OHR to be closed, and responsibility for the future and functioning of Bosnia to become the exclusive right and competence of the people of Bosnia.”[11]

The developments summarized above suggest that Russia, in the coming period, with the support of the Bosnian Serb administration, will try to rule out the powers of the PIC and to close the OHR.  It is understood that Russia, in such a game plan, will try to employ its UN Security Council membership as a trump card.

Considering these worrisome developments, it is possible to assert that the continuation of the powers of the PIC, including the Bonn Powers, is essential for the preservation of the sovereignty and territorial integrity of BiH within the framework of its constitution. In this context, Turkey, as a member of the PIC Steering Board, has the ability as well as the responsibility as a Balkan state with exceptional ties with BIH, to influence the shaping of the decisions to be taken regarding the continuation of OHR. Turkey, in this process, as it did in the past, should staunchly defend the sovereignty and territorial integrity of BiH and must strongly oppose the approaches that aim to dismember BiH.

[5] PIC SB Political Directors Sarajevo, “Communique by the PIC Steering Board Towards Ownership: From Peace Implementation to Euro-Atlantic Integration” (Office of the High Representative, June 23, 2006), http://www.ohr.int/communique-by-the-pic-steering-board-3/.

[6] PIC SB Political Directors, “Communiqué of the Steering Board of the Peace Implementation Council,” International Organization, Office of The High Representative, November 10, 2008, http://www.ohr.int/communique-of-the-steering-board-of-the-peace-implementation-council-8/.

[8] PIC SBA, “Statement of the Ambassadors of the Peace Implementation Council Steering Board *” (Office of the High Representative, November 13, 2019), http://www.ohr.int/statement-of-the-ambassadors-of-the-peace-implementation-council-steering-board/.