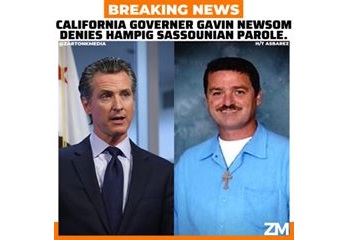 Umpteenth time parole application of the lifelong sentenced terrorist Hampig "Harry" Sassounian, who murdered Consul General Kemal Arıkan in the State of California (the US) on May 27, on January 28, 1982, was again denied. In a joint declaration of the Turkish - American National Steering Committee (TASC), Associations of Turkish Americans of Southern California (ATASC) and “Victims of Terrorism” thanked California Governor Newsom for Denying Parole to Hampig Sassounian[1].

In our previous article on April 24[2], we penned an article that April 24 is a “manufactured” date and that Armenian terrorism against Turkish targets is attempted to be encouraged through Sassounian's actions. We continue with this article on the recent rejection of parole for Sassounian, whose request for release was endorsed in December 2019. The rejection of Sassounian Parole by California Governor Gavin Newsom is certainly welcome, although the governor's letter has problematic aspects.

In his statement by which he refused Sassounian's release on parole, California Governor Newsom also used a wording that, to an extent, condones the vicious crime of international terrorism that Sassounian committed[3]. It is an unacceptable explanation by the Governor to speak as if the genocide was real and to indirectly tolerates terrorism. It is also said that Sassounian has committed errors at a young age. This is also a wording to alleviate the burden of the terrorist act by referring to it as “youth mistake”. However, necessary measures are still not taken to prevent this “mistake” from recurring. First, action must be taken by the American government to end the activities of organizations that have been working for years to fill the fertile minds of young people with the idea of ​​revenge. While Justice Commandos of Armenian Genocide (JCAG) is defined as a terrorist organization by the Central Intelligence Agency (CIA), it is clearly stated that it has a link with the Armenian Revolutionary Federation (ARF). Therefore, it is clear that the definition of "terrorism" in the United States needs clarification.

As it was stated before, in order to be a "youth mistake", the person in question should show a sign of regret. Since he is not regretful and the way he talks addressing the future generations gives an idea about ​​his lack of “regret”.

The worrying issue is not only the defense of these ideas by Sassounian, but also his supporteres who created the “Hampig Sassounian Defense Fund”, which itself is supported by the ARF. In order to be an “inspiration” for today's youth, in 1996 in US newspapers with the title of "Letters to Hampig". Messages from Armenian children in the US to Sassounian were published in The Armenian Weekly. In these letters, children aged between eight and fifteen wrote their admiration for Sassounian. It can be seen that all children stated that they were members of the Armenian Youth Federation (AYF)[4]. AYF, which is a bridge between Sassounian and AYF member children, shared Sassounian's call[5]. Sassounian stated that he was innocent in his call and thanked those who provided financial and psychological support. The crucial part of the call is at he end. He gave the message to the AYF that all the sacrifices they would make to defend the Armenian claims would be worth it and that they should continue fighting. This message by Sassounian, serves no other purpose than to make terrorism sacred and attractive for young people. All this is on the newspaper pages, not a confidential information. The US needs to act quickly on this issue.

California Governor Newsom also indicated in his statement that Sassounian’s revenge speech in 2012 could still not be ignored[6]. Therefore, far from saying that he is “rehabilitated”, in Governor’s statement, it is highlighted that Sassounian is a serious threat to society. As a matter of fact, it was decided to deny Sassounian parole.

It has been clearly demonstrated by the documents that Sassounian is a terrorist, in connection with JCAG and ARF. It should be noted that the US, which has combatting terrorism high in its agenda, urgently needs to reassess ARF activities carried out within the US. Expressing its sensitivity on terrorism at every opportunity, the US is expected to behave consistently in this regard.

Although California Governor Newsom's statement is far from reflecting historical facts, he himself has admitted that Sassounian has not been "rehabilitated" to be released. It is no secret that the ARF and similar organizations are engaged in securing Sassounian's parole. The fact that vast sums are being collected for the "Sassounian Defense Fund" is also not a confidential information. Therefore, the fact that ARF, which supports such a terrorist and supports terrorism, can operate so comfortably in the US, casts a shadow over the US's fight against terrorism. The redefinition of terrorism is important in terms of both emphasizing the reliability of the US judicial mechanism and determining the lines of the US' fight against terrorism.

[4] AYF is the youth organization of ARF.