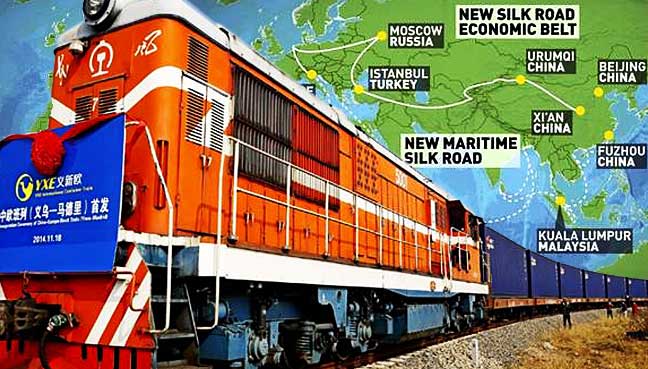 It is noteworthy that China has been rapidly rising among global actors in recent years. China increases her attractiveness day by day, not only technologically and scientifically, but also as an economic power. Although China is defined as a "rising global power", it is in an evolution that will make other global actors jealous. Italy is one of those attracted by the appealof China, which is becoming a center of attention for the West in recent days. Before referring to Italy's interest in China, it would be useful to take a look at China's recent developments in international economic relations.

In the early days of 2019, China announced that the spacecraft Chang’e-4 drone landed on the dark side of the moon. China, the first country that had sent an  exploration vehicle that landed on the dark side of the moon, has announced that it would send Chang’e-5 to the Moon this year.[1]China's first unmanned spacecraft to land on the dark side of the Moon was developed with scientists from the Netherlands, Germany, Sweden and Saudi Arabia.[2]In an interview with China Daily, former NASA director Charles Bolden said that legal barriers between China and the United States should be relaxed. He emphasized that he was optimistic regarding this issue and that being cool-headed will be beneficial.[3]

The projects of China are not limited to space. Besides astronautics, recently, China’s Belt and Road Initiative (BRI) is getting popular. It is understood that when it is expressed in numbers, the project is a geographically big project. The project covers an area of ​​40 million km2with more than 60 countries included from Europe and Asia, in addition to a 47.100 km highway, 14 logistics centers, oil and natural gas pipelines, and extensive energy transmission lines. The whole project corresponds to %26 of the world's surface and 4 billion of the world's population.[4]The project is important with these features and a project too big to underestimate. The project also aims to connect Asia, Europe and Africa. The support for integrated transportation by creating inter-continental roads, maritime and aviation corridors, averting non-tariff barriers in trade and paving the way for investment, encouraging intergovernmental cooperation, expanding cultural and human ties, student and staff changes are among the targets.[5]In order to establish this infrastructure, the year 2049 was determined as the target year.

If we look at Europe's interest in China generally, China first began to draw attention in 2015 with its contacts with UK. This visit in 2015 was the first visit of Chinese authorities to the UK since 2005. During the visit, the UK-China Joint Statement[6]on the establishment of a comprehensive global strategic partnership in the 21st century was issued. The visit of President Xi Jinping was referred to as the beginning of the golden age of Chinese-British relations in the Joint Declaration. It was stated that these relations were based on a durable, inclusive and win-win relationship. In addition, it was announced that the trade and investment relations between the two countries will be developed based on mutual political confidence, equality and mutual respect. In this first meeting after so many years, the idea of ​​establishing an infrastructure alliance between the UK and China had been brought up as well. In this context, cooperation possibilities focusing on China's New Silk Road Project and the UK's Northern Powerhouse Project were discussed.[7]Therefore, this visit is important in terms of China's presence in Europe and strengthening its relations with Britain. Also, considering the economic problems of Europe today, China could be regarded as a potential partner who can provide economic impetus for Europe.

The UK's interest towards China and the BRI based on the Joint Declaration signed in 2015 constitute a recent development while UK is preoccupied with Brexit it has been announced that the UK Finance Minister Philip Hammond will attend the BRI forum which will be held in China this year.[8]This initiative is not the first step after 2015. Finance Minister Hammond joined the forum in 2017 as well.[9]In 2017, China's senior economic officer responsible for the economy Ma Kai and Britain's Minister of Finance Philip Hammond, reached an agreement that London would become a hub for the “offshore”[10]use of Chinese Yuan.  They also agreed to strengthen and encourage co-operation in clean energy research and mutual trade. Within the scope of the “Belt and Road Initiative”, (formerly “One Belt, One Road”); it was aimed to enhance the role and the effectiveness of the UK. Now, in 2019, the possibility of no-deal Brexit causing heavy losses for non-EU countries are raising concerns. It is being questioned whether China would be able to improve its commercial relations with the UK, even if the United Kingdom reaches economic and geopolitical agreements with China. China does not consider the EU as a whole, but evaluates the EU countries individually. Therefore, no-deal Brexit has the possibility of causing losses to China. Not only Brexit developments but the drop in the growth levels of Europe, China and Japan is also noteworthy. International Monetary Fund - The IMF stated in January last year that China's growth rate will drop as a consequence of a no-deal Brexit which would create a major risk for the growth of the global economy in 2019.[11]Although the IMF drew a pessimistic picture in its January statements, in April, European Stock Exchanges completed the period in an upward trend due to the growth of China above the market expectations in the first quarter of 2019.[12]

Switzerland is also one of the countries that has been interested in China's BRI project. In April, Ueli Maurer, President of the Swiss Confederation, is expected to pay an official visit to China. Switzerland recognized that signing the BRI agreement during Maurer's visit was an important step towards economic development. Maurer, who doubles as the Minister of Finance of Switzerland, will attend the BRI summit on 28-29 April. Around 40 foreign heads of state are expected to attend the BRI summit. Switzerland has been among the first in the western countries to recognize the People's Republic of China. Moreover, Switzerland is the first country to sign a free trade agreement with China in Continental Europe.[13]

Now it is seen that Italy jumps into the bandwagon of countries attracted by China. US President Donald Trump's reaction to this development was expressed by his assistant Garrett Marquiz, in a tweet, stating ‘Italy is a major global economy and a great investment destination. There is no need for Italian government to lend legitimacy to China’s infrastructure show project.’[14]. However, the Silk Road project is not a project for show, as the special assistant of US President Donald Trump has mentioned. The Italian Minister of Finance considers the Modern Silk Road Project as a “train which must not be missed”. The Minister of Economic Development of Italy, Michele Geraci also stressed the importance of the BRI and stated that the agreement planned by Rome with Beijing could be a model for other EU countries.[15]Italy has the smallest trade volume with China among the EU countries. In 2018, Italy imported only 13 billion Euros worth of goods from China while France accounted for more than 58% of this amount, and Germany imported seven times more. China did not invest in Italy, but invested in England, Germany, France and some volume in the Netherlands.[16]The US was not the only one to react to Italy’s rapprochement with China. The above-mentioned countries that have import relations with China also reacted to the rapprochement between China and Italy. Paola Subacchi from the Queen Mary University of England wrote in her letter in response to Italian Minister Geraci’s statement published in the Financial Times that Geraci's statements were far from convincing and that the connection with China would not help to recover the worsening economy of Italy.[17]Considering all of China's international partnerships, the partnership between Italy and China is considered to be the most concrete cooperation.

The future of this project, whose foundations are laid today, is important for the yearly increasing trade volume of China with Central Asian countries and the EU. It is clear that the road and rail infrastructure in Asia will be insufficient as the volume of trade with the world continues to increase. The world’s positive response towards the project shows that China's soft power is being recognized.[18]The agreement signed between China and Italy is an indication that the Silk Road project is well on its way. Italian Minister Geraci states that Chinese investments in the leading ports of Europe indicates that the New Silk Road Project was in operation in Europe for a long time now.[19]There is no doubt that Italy is an important actor both in Europe and the Mediterranean. It is therefore understandable why Italy is an important part of the New Silk Road Project. Minister Michele Geraci further argues that the criticisms directed at Italy is no different than the criticisms directed to United Kingdom when it joined Asia Infrastructure and Investment Bank.

The architect of the “Soft Power” concept, Joseph Nye, wrote that the wind is blowing favorable for China and that sending an unmanned scout vehicle to the dark side of the moon, building artificial islands in the South China Sea, and finally establishing close relations with Italy displays how far China has come in terms of its soft power. Nevertheless, Nye underlines that China's domestic policy may hinder getting the expected results of investments in “Soft Power”. Joseph Nye, on the other hand, points out that the unilateral policies of US President Trump has a diminishing effect on the US's soft power.[20]

Here, it should be underlined that the importance of China and the its Modern Silk Road project have been recognized by Turkey for a long time now. In addition to the political and economic efforts of Turkey to become an active participant of BRI, there are also numerous studies by the Turkish academic world on this issue. In this context, AVİM is one of the think tanks that contributes to the literature on this subject. In addition, AVİM, by organizing the meeting titled “Regional Integrated Transport Corridors Project” in 2013, highlighted its pioneering role among the think tanks in emphasizing the global importance of the Modern Silk Road concept.[21]