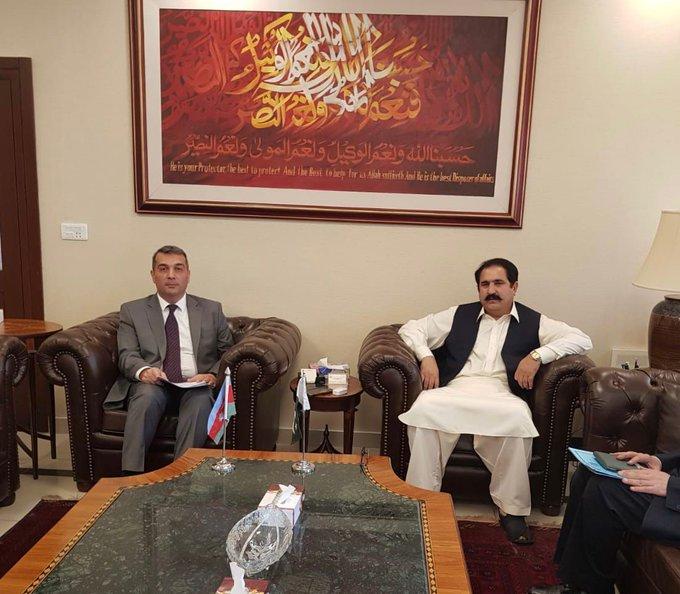 The focus of the meeting was on boosting the Pakistani-Azerbaijani ties and the process of signing a Memorandum of Understanding (MoU) for cooperation in the sphere of labor, employment, and social protection between the two countries.

Turi expressed satisfaction with the growing cooperation between Pakistan and Azerbaijan, underlining the importance of a Memorandum of Understanding (MoU), as well as enhanced interaction at the leadership level to share the national labor market demand between the two countries.

“[I] was delighted to meet with H. E. Mr. Sajid Hussain Turi, Minister of Overseas Pakistanis and Human Resource Development. The current level of the Azerbaijani-Pakistani bilateral relations, as well as the importance of continuing the intensive contacts between relevant Ministries of both countries, were discussed at the meeting,” Farhadov wrote on his Twitter account on May 17.

On May 16, a delegation led by the Chairman of the National Assembly (lower house of parliament) of Pakistan, Raja Pervez Ashraf, arrived in Baku to attend the third annual meeting of the Parliamentary Assembly (PA) of the Economic Cooperation Organization (ECO).

The conference along with parliamentary delegations from Turkey, Pakistan, Iran, Kazakhstan, Uzbekistan, Tajikistan, and Kyrgyzstan in presence is being held in the Azerbaijani parliament on May 17.

Within the framework of the conference, a number of bilateral meetings between Azerbaijani Parliament Speaker Sahiba Gafarova and the heads of delegations participating in the event are planned.

During the 44-day war with Armenia in 2020, Pakistan was among the first countries to voice political support for Azerbaijan. Pakistan also supports Azerbaijan in the restoration of the country's liberated territories.

The drills aim to improve the coordination among the special forces units of friendly and partner countries during combat operations, prepare for operations in peacetime and wartime, and exchange knowledge and experience.

Over the past decade, Pakistani military experts trained about a hundred Azerbaijani military units.

Furthermore, the parliaments of Azerbaijan, Turkey, and Pakistan have signed the Baku Declaration on cooperation. The document was signed following the trilateral meeting held by speakers of the three countries’ parliaments on July 27, 2021.