71ST ISSUE OF ERMENI ARAŞTIRMALARI JOURNAL HAS BEEN PUBLISHED
Share : 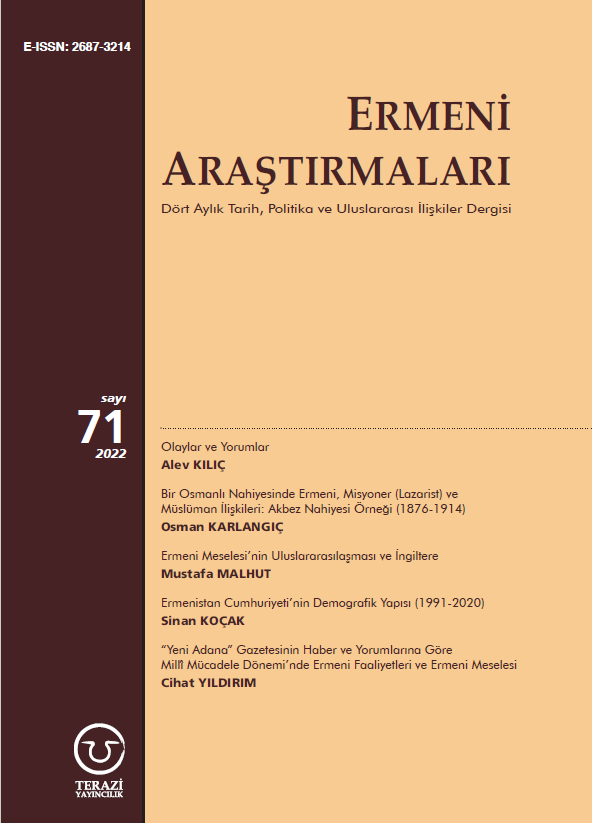 In the 71st issue of Ermeni Araştırmaları Journal, there are 1 editorial and 4 research articles.

In the editorial titled “Olaylar ve Yorumlar” (Facts and Comment)  the developments in Armenia between December 2021 and May 2022 are evaluated by Alev Kılıç. The Karabagh war led to a substantial change in the region, opening new horizons for establishing peace, stability, cooperation, and neighborly relations in the region. In this context, the negotiations between Azerbaijan and Armenia, and signing of a Peace Treaty come to the forefront as priorities. On the other hand, it is known that normalization process has started between Turkey and Armenia. Kılıç evaluates developments in this intense period thoroughly .

The first article in the 71st issue is the article titled “Bir Osmanlı Nahiyesinde Ermeni, Misyoner (Lazarist) Ve Müslüman İlişkileri: Akbez Nahiyesi Örneği” (The Relations Between Armenians, Missionarries (Lazarists) And Muslims in an Ottoman Town:The Case Of Akbez Town (1876-1914)). Karlangıç examines the relations between Muslims, Armenians and missioners in an Ottoman town, Akbez, from the last quarter of 19th century to the beginning of first world war.

The second article is titled “Ermeni Meselesi’nin Uluslararasılaşması Ve İngiltere” (The Internationalization Of The Armenian Question And Britain). Malhut examines the Britain’s approach towards Armenian question and its role in the internalization the issue.

The last article of the 71st issue is Cihat Yıldırım's article titled "“Yeni Adana” Gazetesinin Haber Ve Yorumlarina Göre Millî Mücadele Dönemi’nde Ermeni Faaliyetleri Ve Ermeni Meselesİi"  (Armenian Activities And The Armenian Issue During The National Struggle According To The News And Comments Of ” Yeni Adana" Newspaper)). In his article, Yıldırım evaluated the events that took place between the Armenian community and the Muslims, based on the copies of the newspaper Yeni Adana between the years 1918-1921.

You can reach the 71st issue from here.