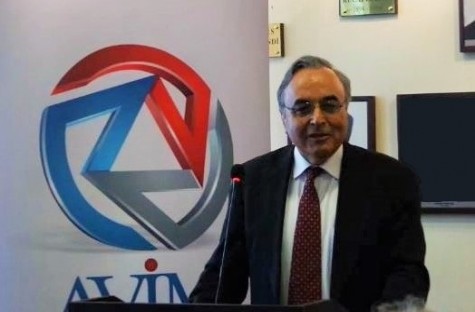 His Holiness Pope Francis led a mass at St. Peter’s Basilica at the Vatican on 12 April 2015 for the faithful of the Armenian rite on the occasion of the centennial commemoration of the losses of the Armenians during the First World War. In his message for “the tragic experience one hundred years ago”, he described the events -in quotation- as, “in what is generally referred to as the first genocide of the twentieth century”.

Even an indirect reference to Armenian losses during the First World War as genocide is tantamount to the distortion of historical facts, a disregard to legal and judicial basics, as well as an offense against the Turkish people and instrumental in the defamation against Turkey.

It now surfaces that these remarks are also challenged, from a view point of distortion of history, from another corner of the world, Namibia, a former German colony. In the daily “New Era” published in Windhoek, Namibia, an article by Charles Mubita voices the following: “The first genocide of the 20th century was committed in 1904 in Namibia against Namibians and not in Armenia… this distortion is not an isolated event and it confirms the role of the church in influencing the colonization of Africa… the statement by the Holy See cannot be accepted. It is not only controversial in every aspect, but it is based on prejudice and distorts history and refuses to acknowledge the genocide against Namibians.”

The writer of the article does not shy away from sympathizing with the Armenians, but appears not to have a clear knowledge of the events. He also writes of “the killing of Armenians by Ottoman Turks,” or “genocide against Armenians” in the hearsay of the one sided Armenian narrative. This is yet another example of the burden incumbent upon Turkish historians to explain to a wider public that the unfortunate fate of Namibians have no similarities with the loss of lives of Armenians nor the orders carried out by the colonial German army and the fight for survival of the Ottoman army.

To conclude with the message of His Holiness Pope Francis again, we fully concur with these wishes: “May God grant that the people of Armenia and Turkey take up again the path of reconciliation and may peace also spring forth in Nagorno-Karabakh. Despite conflicts and tensions, Armenians and Turks have lived long periods of peaceful coexistence in the past and, even in the midst of violence, they have experienced times of solidarity and mutual help. Only in this way will new generations open themselves to a better future and will the sacrifice of so many become seeds of justice and peace.”

Indeed, reconciliation needs encouragement and the courage to discuss and come to an understanding of the mutually shared past grievances. Justice and peace needs a demonstration for the solution of the occupation of Nagorno-Karabakh and the surrounding seven territories of Azerbaijan.