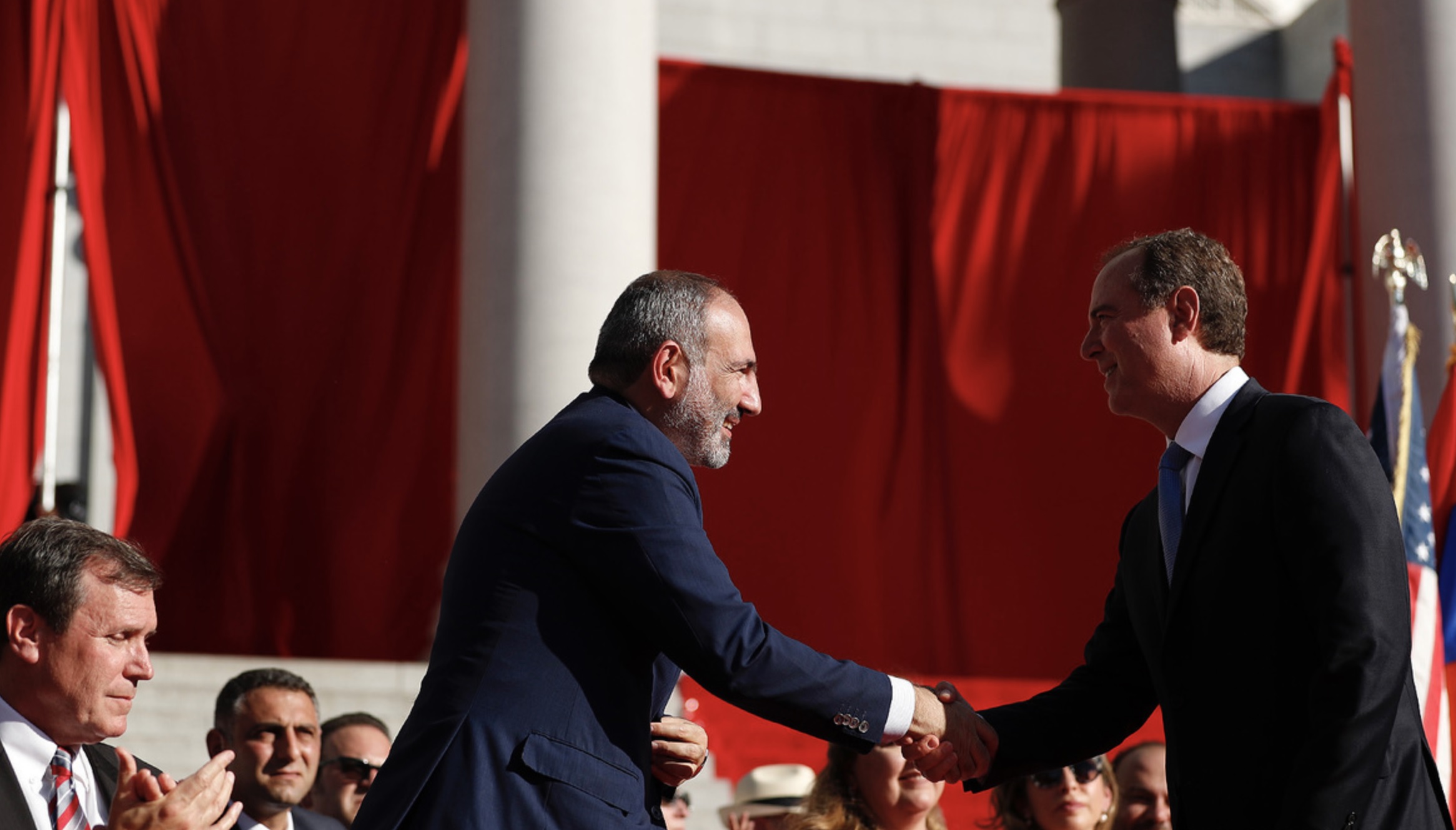 On 29 October 2019, the US House of Representatives voted 405 to 11 in favor of a resolution titled “H.Res.296 - Affirming the United States record on the Armenian Genocide.” This resolution resolved that the US should officially recognize the “Armenian Genocide;” reject all ventures to deny “the Armenian Genocide or any other genocide” and support initiatives seeking to raise awareness about the “Armenian Genocide” and its relevance “to modern-day crimes against humanity.” As such, the resolution of the US House of Representatives looked like a great victory for the Armenian lobbies in the US, which have been concentrating almost all their efforts for the passage of a resolution not for years but decades. Hence the passage of the almost unanimously supported “genocide resolution” should have been a justified reason for festivity among these circles. Alas, that has not been the case.

Almost a month has passed since 29 October 2019 and we have been following the print and online media and social media to see the reactions that this resolution elicited among the advocates of the Armenian narrative. What we have seen is quiet and restraint among the rank and file in the US as well as Armenia and other countries. This is quite a contrast with the ecstasy during the sensational times of 2015 and 2016, when some parliaments in Europe had passed resolutions on the “Armenian Genocide.” Why is it so? Well, the answer is that the decades-long strived for victory of 29 October 2019 is no victory at all, or just a Pyrrhic one.

For many people, reading the texts of resolutions, laws, decrees and other official documents is not the most enjoyable activity on earth. Besides, why should one spend time for such a dull thing, when she is informed that the US House of Representatives has passed a resolution on Armenian Genocide? Is this not the main point that we should know? Not really. As said, “the devil is in details” and it is that “devil” that Armenian lobbyists try to hide, yet to no avail.

The Preamble of the House Resolution starts with the following:

Whereas the United States has a proud history of recognizing and condemning the Armenian Genocide, the killing of 1.5 million Armenians by the Ottoman Empire from 1915 to 1923, and providing relief to the survivors of the campaign of genocide against Armenians, Greeks, Assyrians, Chaldeans, Syriacs, Arameans, Maronites, and other Christians;

Let’s skip the the factually erroneous claims of the number game of “1,5 million” and the ever extending dates of “1915-1923” and focus on the second part of this statement. Here, the House frames the “Armenian Genocide” within the wider “genocide of the Christians in the Ottoman Empire.” “The genocide of the Christians perpetrated by the Muslim Ottomans” is a relatively new claim forged by the advocates of the genocide thesis in the last couple of years in order to win the hearts of the conservative Christians and the others distressed by the atrocities of the DAESH/ISIS and similar Jihadist terrorists in the Middle East. Likewise, it is an attempt to win comrades in arms among radical Greeks and others in the “holy war” against Turkey. It is obvious to almost all serious scholars that such a comprehensive “genocide of the Christians” is a politically motivated pseudo-academic claim. Besides, the ambiguous expression of “other Christians” which fails to specify who these other Christians are, reflect the haphazard and sloppy approach of the representatives in the House. Regrettably for the Armenian lobbyists, this is the result of their decades-long committed  efforts. The House equates  the “Armenian Genocide” with equally politically motivated forgeries on the “genocide” of the “Greeks, Assyrians, Chaldeans, Syriacs, Arameans, Maronites, and other Christians.” So much effort, so much money have gone up in smoke.

In the preamble of the resolution, the House refers to the reports of “Honorable Henry Morgenthau United States Ambassador to the Ottoman Empire from 1913 to 1916” as one of the evidences of the factuality of the “Armenian Genocide.” Lamentably for the Representatives in the House and the Armenian lobbyists, this claim has already been disproved long ago, particularly after the publication of Heath W. Lowry’s “The Story Behind Ambassador Morgenthau’s Story” in 1990.

Another reference in the preamble of the resolution is given to Raphael Lemkin “who coined the term ‘genocide’ in 1944, and who was the earliest proponent of the United Nations Convention on the Prevention and Punishment of Genocide, invoked the Armenian case as a definitive example of genocide in the 20th century.” Referring to Lemkin in order to prove the factuality of the “Armenian genocide” is also a relatively new habit. The reason behind this new habit is the impossibility of characterizing the 1915 events as genocide if one sticks to the valid definition of the crime of genocide stated in the 1948 Genocide Convention. Yet referring to Lemkin is not spineless. Firstly, the definition of the crime of genocide that was proposed by Lemkin and the definition of the same crime finally approved by the UN in the 1948 Genocide Convention are quite different. Hence, Lemkin’s definition can only be regarded as a draft, not the final definition. What is more problematic for the lobbyists and the Representatives in the House is that Lemkin in his “Introduction to the Study of Genocide,” an unpublished book that was made available to the researchers by Steven Leonard Jacobs under the title “Lemkin on Genocide” in 2012 mentions sixty-two cases of genocide in history, forty-one of which took place in modern times.  The ninth genocide in the list of the modern genocides is the “genocide by the Greeks against the Turks.” Lemkin also includes the “genocide against the American Indians.” He provides a ninety-eight-page-long assessment of the “genocide against the American Indians” in this study. As such, if we have to take Lemkin’s studies as the reference point to decide which events in history have been genocides, we need to recognize the “Turkish Genocide” perpetrated by the Greeks along with the “genocide of the American Indians.” Would Armenian lobbyists, their Greek comrades in arms or the Representatives in the House welcome such a move? Not, really.

Fourthly, the preamble of resolutions refers to Adolf Hitler’s alleged words “[w]ho, after all, speaks today of the annihilation of the Armenians?” by which he set the stage for the Holocaust. Sincerely, sometimes commenting on this and similar claims feels like Déjà vu occurring over and over again. Yet there is no way other than repeating here once again what has been repeated so many times before. The allegation about Hitler’s words on the “forgotten annihilation of the Armenians” was investigated during the Nuremberg Trials and the judges ruled that the factuality of this statement could not be verified. The judges, accordingly, dismissed that these alleged words could be used as evidence during the trials. Is there anything more that is necessary to say on this allegation?

Lastly, how disappointing for the Armenian lobbyists that Steve Cohen, few days after the passage of the genocide resolution, the Democratic Party representative of Tennessee said “I’ve always opposed the Armenian resolution, and I voted for it this week. I voted for it because Turkey doesn’t seem to respect the United States at all.”[1] This is an obvious verification of the motives of the Representatives in the House, while voting for the genocide resolution. How deplorable for the Armenian lobbyist that their great cause is after all just a political tool for the American lawmakers to punish Turkey whenever relations between the two countries get intense.