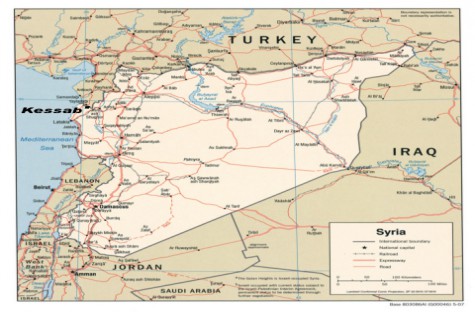 On March 21, Kessab, a town located on the Turkish-Syrian border populated predominantly by Armenians was attacked by Al Qaeda linked terrorist groups that were said to have crossed from the Turkish territory. Christian Armenians are said to have fled to neighboring Latakia and Bassit.  Armenian officials and media claim that Turkey has provided support to the terrorists by letting them use its territory or with the assistance of the Turkish air force. The Turkish Ministry of Foreign Affairs has refuted these claims.

In their propaganda, Armenians accuse Turkey of assisting the extremists while claiming that “Turkey is continuing her genocidal policy against the Armenians”. [iii] In fact, Armenians go as far as to describe the events as the third time that Kessab Armenians had been deported in history, first being in 1909 when, according to the Armenian Atlantic Association’s (AAA) letter to US President Obama, the Turkish armed detachments had invaded the town, and the second being during the tragic events of 1915.

The Wall Street Journal reported that Armenian-Syrians are blaming Turkey for the advances in Kessab as “Ankara has long turned a blind eye to rebels crossing their borders and weapons flow”. The Armenians blame Turkey for allowing “hundreds of radical foreign fighters to cross its border and attack the civilian population”.[iv] They further claim that nearly the entire population of Christian Armenians has fled the town and those who are unable to flee were taken hostage, and churches and homes were looted.


Armenian media go as far as to claim that the downing of the Syrian jet by the Turkish Military was a part of a Turkish military offensive against Syrians in the Kessab area.[v] They claim that there was no violation of airspace as “the jet was over Syrian territory”.

The Armenians call on authorities to intervene and urge Turkey “to stop assisting the extremist groups in attacking the Armenian population in the region”. In particular, Armenians call on the US government to “make it clear that the United States will not tolerate its NATO ally’s policy of providing support to extremist groups” and to seek UN cooperation to ensure greater protection for all minority groups. [vi] The US State Department has stated that it was “deeply troubled” by the violence in Kessab, but, in the words of Armenian National Committee of America (ANCA), “stopped short of criticizing Turkey’s role”.


The Turkish Ministry of Foreign Affairs made the following statement with regard to the Armenian claims: [vii]

“The allegations by some circles that Turkey is providing support to the opposition forces by letting them use its territory or through some other ways during the conflict which have intensified recently in the Latakia/Kessab region are totally unfounded and untrue.”


The Ministry, in the statement, describes the efforts to draw an analogy between the latest developments in Kessab and the painful events of the past as a “confrontational political propaganda attempt.”

Turkey is one of the countries most affected by the conflict in Syria and it stood out by its refugee policy. Turkey has opened its doors to about 800 thousand civilians affected from the conflict.  The recent developments have shown that it has done so regardless of the ethnicity, religion or sectarian background of the civilians. Officials had already stated following the Armenian claims that Turkey was ready to admit Syrian Armenians residing in Kessap and protection would be provided as is the case for other Syrians.[viii]  In fact, according to an official statement of the Turkish Foreign Ministry, 18 Syrian Armenians were admitted from the border crossing on April 5 and settled in Hatay, and that measures have been taken in order to meet their needs. [ix]


With regard to the shooting of the Syrian aircraft, it is clear that Turkey has used its legitimate right of self defense. According to the Turkish general staff,[x] one of its control centers detected two fighter aircraft and warned them several times after they approached the Turkish border. One aircraft disregarded the warnings and entered Turkish airspace at Yayladağı, east of the Kessab border crossing. A Turkish F-16 fired a rocket at the Syrian jet and it crashed around 1,200 meters inside Syrian territory. The Syrian aircraft acted in contravention of Article 15 of the Turkish-Syrian Border Commission Protocol, which bans aircraft from either side getting any closer than five kilometers to their shared border. [xi]  There was, therefore, a breach of Turkey’s sovereignty and what Turkey did in turn was in accordance with international law. Furthermore, the US Department of State has stated that there was no reason to doubt Turkey's statement on this incident. [xii]

To sum up, what the Armenians claim so far rely on misinformation and unverified sources. As some Armenian sources report, first- hand information from Kessab is very scarce. [xiii]  Armenians have taken up this opportunity to replace the lack of information with misinformation and carry out their propaganda. The worldwide Armenian Diaspora has used social media to contribute to the propaganda efforts. Some Armenian sources report that fake photos and videos have been used to create hysteria. In fact, an image of a slain woman with a cross in her mouth, which was linked to alleged violence in Kessab, has been exposed as a hoax as media observers pointed out that the picture was taken from a Canadian horror movie.[xiv]  Furthermore, as mentioned earlier, Armenian Diaspora newspaper Asbarez reported 80 deaths but this information has never been confirmed. In fact, according to MassisPost, a Hunchak newspaper, Tevan Poghosyan, a member of Armenia's parliament who spoke to the mayor and residents reported no civilian casualties. Other sources point out to the mayor’s interview in late March with Armenian TV channel GALA-TV in which he refuted claims that Armenians were being targeted. [xv]


Armenians do not refrain from linking what is happening in the region with the tragic events of 1915. However, this is not the proper way of dealing with the common past of two peoples. Turks and Armenians should work towards reestablishing their historical relations without forgetting the difficult periods in their common history. However, in this endeavor, the two sides must be honest. As such, the Armenians should refrain from continuing to present their version of events as the uncontested truth.

[ii] Armenian Massis Post reports: “Tevan Poghosyan, an Armenian Member of the Parliament who visited Latakia last week on a personal trip reports no civilian casualties after speaking to the mayor and residents.” Massis Post, “Dissecting Kessab: What is (and Isn’t) Happening in the Historical Armenian Town (posted on: 5 April 2014) - http://massispost.com/2014/04/dissecting-kessab-what-is-and-isnt-happening-in-the-historical-armenian-town/

[vii] Press Release Regarding Recent Developments in Latakia/Kesap and Unfounded Allegations in the Press on this Matter, Foreign Ministry of Turkey, March 26, 2014.

[ix] Press Release Regarding the Developments in Kesab, Foreign Ministry of Turkey April 6, 2014.