DEVELOPMENTS IN POST-2020 KARABAKH WAR ARMENIA AND THEIR IMPLICATIONS - II: THE BRAWL BETWEEN PASHINYAN AND THE GENERAL STAFF
Commentary No : 2021 / 24
Turgut Kerem TUNCEL
10.03.2021
7 min read 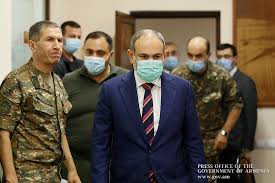 As we explained in our previous article, Armenia has been going through tough times since the beginning of the 2020 Karabakh War on 27 September 2020. When the clashes ended on 10 November 2020 by the signing of a Russia-brokered ceasefire, even a blind man could see the disastrous defeat that Armenia faced in the battlefield, notwithstanding the myth of the strength of the Armenian army that had long been propagated by the Armenian elite to the Armenian people. Armenian analysts, who were disinforming their own people about Azerbaijani military advances while mocking the Azerbaijani media and official statements during the war, could do nothing more than lapsing into silence afterwards. Then, a blame game for the defeat began among the Armenian elite.

The opposition, most of which gathered under the Homeland Salvation Movement, volley bombs Prime Minister Nikol Pashinyan for the defeat. President A. Sarkissian, too, finger points Pashinyan as the culprit of the defeat, though in a more veiled way. What shook everyone, however, was the rigorous involvement of the Armenian General Staff into this blame game.

While uproar over the blame game had been continuing, on 25 February, more than forty high ranking military officers, including the Chief of General Staff Onik Gasparyan, issued a statement that directed heavy criticisms to Pashinyan and called upon him to step down from the prime ministry.  This statement reads as follows:

The Prime Minister of the Republic of Armenia, the government, are no longer able to make adequate decisions in this critical situation for the Armenian people.

The Armed Forces has fulfilled its duty with honor, to fight with its people against the enemy.

The inadequate governance of the current authorities and serious mistakes in foreign policy have brought the country to the brink of collapse.

Due to the current situation, the Armed Forces demand the resignation of the Prime Minister and the government, at the same time warn them to refrain from using force against the people whose children died defending the Homeland and Artsakh. The army has always been with the people, as the people have been with the army [emphases added].

Pashinyan condemned this as an attempt coup and dismissed Gasparyan. However, President A. Sarkissian rejected to approve this dismissal. At the present, the case is in front of the Constitutional Court, which will make the final decision as to the dismissal of Gasparyan. However, due to the law, Gasparyan will remain suspended until this decision.

The row between Pashinyan and the General Staff was sparked on 16 February by former President Serzh Sargsyan, who was toppled by the Pashinyan-led ‘velvet revolution’ in 2018. That day, S. Sargsyan, in a TV interview, criticized Pashinyan for making use of the Russian-made Iskander missiles too late, only in the last days of the war, when Armenia had already lost the war. He said that Iskander missiles should have been used earlier and against targets in Azerbaijan. This was a salvo by S. Sargsyan against his arch enemy Pashinyan for mismanaging the war.

Pashinyan answered S. Sargsyan on 23 February. Again, in an interview, he stated  that Iskander missiles were useless and the missiles that were fired did not explode “or maybe 10 percent of them exploded.” Pashinyan said “let him [S. Sargsyan] ask the question, why didn’t the Iskander missile explode? Or why did it explode by 10 percent, for example?” Referring to a statement of S. Sargsyan after the 2016 Four-Day War, the first major battle in years during which Azerbaijan retook several strategic posts, Pashinyan rhetorically said “maybe they were weapons from the ‘80s.”

To remind the reader, after the 2016 Four-Day War, the then President S. Sargsyan at a press conference in Germany said that Armenia “was still fighting with guns from the 1980s,” arguably as an excuse for the loss of the battle. Also to remind, in January 2020, however, bragging over the modernization of the Armenian army through the acquisition of Russian arms, Pashinyan stated that “the Government of Armenia has closed the shameful chapter of the 80’s weapons, because the weapons that we acquired are either manufactured in 2019 or brand new, unused.”

What turned the spark into a fire was the First Deputy Chief of the General Staff Tiran Khachatryan’s remarks on Pashinyan’s comments on the Iskander missiles a day after. According to Yerevan Today (an Armenian media outlet), when asked about Pashinyan’s allegation on the ‘10% explosion’ of the Iskander missiles, Khachatryan “laughed for a long time” and said Pashinyan’s statement was “not serious” and his assessment was “superficial.”  He also warned not to make incautious comments that may jeopardize relations with Russia.  Upon that, Pashinyan dismissed Khachatryan, who, in stark contrast, had been awarded with the title of  National Hero of Armenia after the 2020 Karabakh War a few months ago. This led to the statement signed by more than forty military officers and Pashinyan’s response as mentioned earlier.

These developments reveal some important features of the current state of Armenia. To begin with the brawl between Pashinyan and the ex-President S. Sargsyan, it can be seen that, even at a time of turmoil, they see no harm to continue their battle royal without hesitating to add fuel to the fire in the country. It seems that their hatred towards each other and their desire to acquire political power forestall the responsibility of using common sense for the benefit of Armenia. Here, what is important is that neither S. Sargsyan nor Pashinyan is a simple deputy; they are the two leaders that have run/is running the country.

Pashinyan’s words about the ‘10% explosion’ of the Iskander missiles, which are truly hard to make sense of, are also striking. In fact, these words are a fresh example of Pashinyan’s unreasonable and incoherent thinking and extravagant style. Such careless and contradictory statements and behaviors, which Pashinyan is never short of, make it difficult to regard him as a sophisticated and serious leader.

At first glance, ex-First Deputy Chief of the General Staff Tiran Khachatryan’s remarks on Pashinyan’s imprudent statement could be perceived as an uncontrollable, emotional reaction. However, Khachatryan is not some common person on the street, but the First Deputy Chief of the Armenian General Staff. A person at such a high-ranking position does not have the luxury to act temperamentally before the public.

All these developments expose the immaturity of the Armenian political class, Pashinyan’s lack of qualities expected from a statesperson, and the low level of professionalism of the high command of the Armenian army.

Yet, there is more.

Both Khachatryan’s warning about the relations with Russia and the 25 February statement demonstrates a disaccord between Pashinyan’s government and the army concerning Armenian foreign policy. In fact, the 25 February statement reveals that General Staff is critical not only of Pashinyan’s foreign policy, but also of his rule in general. These demonstrate that there is a serious crack between Pashinyan government and the General Staff, which has grown only bigger since the last couple of months.

The crack between the Pashinyan government and the General Staff brings about the critical question of civilian-military relations. As mentioned above, Pashinyan deemed the 25 February statement as an attempted coup. Although tanks are not patrolling in the streets of Yerevan, at least for now, technically speaking, this statement can in fact be regarded as a coup attempt. For now, it is yet to be seen how this tension, as well as the strife between Pashinyan and the opposition (discussed in the first article of this series), some sections of which openly calls for the armed overthrow of the former, will unfold.