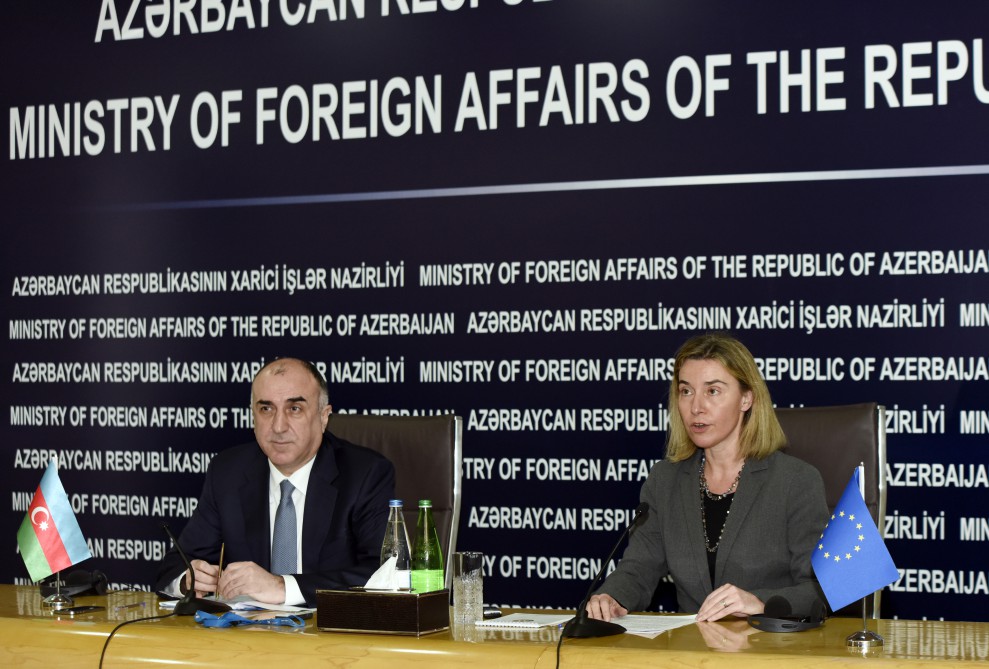 High Representative of the European Union for Foreign Affairs and Security Policy and Vice-President of the European Commission Federica Mogherini visited Azerbaijan on February 29 and Armenia on March 1, continuing her tour of the Eastern Partnership countries following visits to Ukraine and Georgia in November 2015. During her visit, Mogherini had meetings with the presidents, foreign Ministers, and representatives of civil society.[1]

Mogherini’s trip to Armenia just after her visit to Azerbaijan is the latest example of Armenia’s privileged position in the eyes of the EU. It reveals that Armenia, which humiliated the EU in the past and revealed its alignment by choosing Russia over the EU, in stark contrast to Azerbaijan which aims to be a strategic partner of the Western world, is still treated in the same category as Azerbaijan by the EU.

As it can be remembered, in 2013, Armenia, which was expected to sign an Association Agreement including a Deep and Comprehensive Free Trade Agreement with the EU, backed down from signing the Agreement. Instead, Armenia, in the last minute, chose to join the Russia-led Eurasian Customs Union and to participate in the formation of the Eurasian Economic Union, which Armenia ended up being a member in January 2015. This unexpected move by Armenia, which was commonly labeled as a “U-turn” had caught the EU by surprise, causing disappointments, leading to criticisms. However, in the end of last year, despite Armenia’s blow to EU’s prestige just two years ago, EU decided to start negotiations with Armenia for a new agreement.[2]

Despite the criticisms in Europe against Armenia in 2013, now it seems that everything is forgotten. In an interview prior to her tour to Azerbaijan and Armenia,[3] Mogherini stated that “Membership of the Eurasian Economic Union (EEU) in itself is not an obstacle for Armenia’s cooperation with the EU.” She further claimed that the “EU have always been clear that it is for our Eastern Partners to decide what relationship with the EU is the best for them.”

Armenia is in the process of becoming Russia’s satellite. Therefore, one might claim that EU’s recent attitude is linked with Russia’s increasing presence in the region. However, in line with EU’s usual favoritism towards Armenia, EU gives too many concessions to Armenia and is pampering the country to the detriment of its relations with Azerbaijan.

For instance, EU’s approach towards Armenia could also be seen in Mogherini’s speeches during her visit to both countries. At the joint press conference with the Foreign Minister of Azerbaijan, Elmar Mammadyarov, Mogherini stated the following:[4]

“The EU supports the territorial integrity, independence and sovereignty of Azerbaijan. The European Union and its Member States have not recognised Nagorno-Karabakh. The status quo, we believe, is unsustainable and the peaceful resolution of the Nagorno-Karabakh conflict remains for us a top priority. We continue to support the mediation efforts of the OSCE Minsk Group Co-Chairs...”

However, in her speech at the joint press conference with Armenian Foreign Minister Edward Nalbandian, Mogherini used a different discourse:[5]

“The peaceful resolution of the Nagorno-Karabakh conflict remains a priority for the European Union. The status quo is unsustainable to us. The European Union supports the efforts of the Minsk Group Co-Chairs to facilitate progress…”

As it is seen, while mentioning Azerbaijan’s territorial integrity and non-recognition of Nagorno-Karabakh in her speech in Azerbaijan, Mogherini did not touch upon these in her statement in Armenia.  Mogherini’s speech in Armenia reveals EU’s policy of appeasement and concessions to Armenia. For example, when looked at EU’s European Neighborhood Policy Progress Reports of either Armenia or Azerbaijan, you could not find any mention of Azerbaijan’s territorial integrity or Armenia’s unlawful occupation of Azerbaijan’s territories; just inconsequential words about Nagorno-Karabakh. It is this very policy that causes the continuation of the Nagorno-Karabakh conflict, which is the main reason of the instability and hostilities in the South Caucasus. Thanks to EU’s pampering, Armenia continues to get away with disrupting peace and stability in the region without facing any consequences.

In fact, recently, a criticism to the EU came from within Armenia in relation to EU ignoring developments in Armenia. Armenia’s opposition Heritage Party Chairman and first Foreign Minister of Armenia, Raffi Hovannisian issued a letter on March 1, 2016, to Federica Mogherini, on the occasion of her visit to Armenia.[6] In his letter, Hovannisian heavily criticizes the Armenian government regarding human rights and democrary. He brings up several instances of violations of human rights and democracy in Armenia, and criticizes Europe for “turning a blind eye” to these.

Azerbaijan has always looked to having closer ties with the EU and has embraced the Western path. Despite EU’s double standards and ups and downs in relations due to EU’s attitude, unlike Armenia which made its choice in 2013, Azerbaijan has always stayed steadfast in EU path. It is clear today that closer ties with Azerbaijan is for the benefit of EU in many aspects, from energy security to combating terrorism. It is sad that EU fails to realize that this very attitude is offending Azerbaijan, and risks alienating and pushing Azerbaijan away.