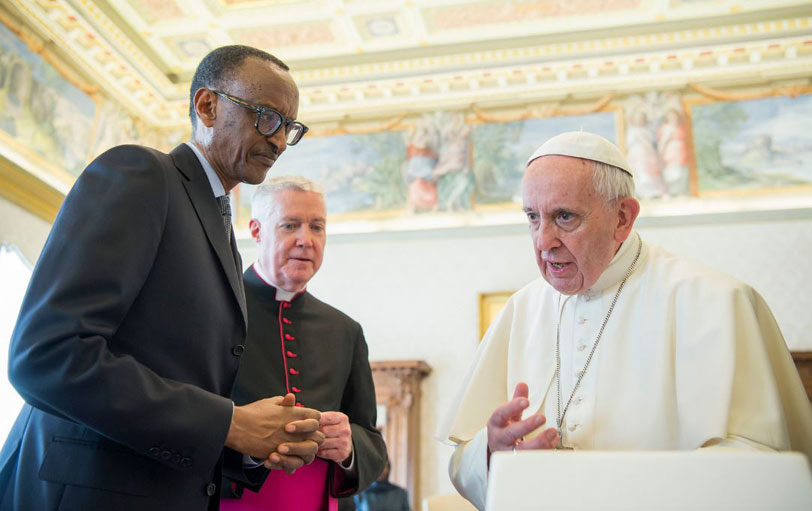 On 20 March 2017, Pope Francis, the spiritual leader of the Roman Catholic Church, met with the President of Rwanda Paul Kagame at the Apostolic Palace in Vatican City. It has been revealed that at this meeting, which could be considered as highly significant in terms of the strained relations between Rwanda and the Holy See, Pope Francis apologized for the Catholic Church’s role in the Rwandan Genocide of 1994.

As it is known, the Rwandan Genocide in 1994, which claimed the lives of more than 800,000 Tutsis and moderate Hutus at the hands of Hutu extremists, is one of the three cases that is acknowledged as genocide before international law. In Rwanda, Catholic institutions and missions, together with the colonial administration, have been accused of laying the grounds of divisions among the Rwandans that lead to the genocide in 1994. Members of the Catholic Church of Rwanda have been also accused for ignoring/facilitating the massacres, with some actively participating in the massacres. The Vatican, as well, has been criticized for its approach of denial with regards to the Rwandan Catholic Church’s role in the massacres and for not apologizing for the crimes committed by the Church members.

The papal apology finally came after 23 years. According to a statement by the Holy See Press Office released after the meeting between Pope Francis and President Kagame, the Pope conveyed “his profound sadness, and that of the Holy See and of the Church, for the genocide against the Tutsi”, and expressed “his solidarity with the victims and with those who continue to suffer the consequences of those tragic events”. He implored “God’s forgiveness for the sins and failings of the Church and its members, among whom priests, and religious men and women who succumbed to hatred and violence, betraying their own evangelical mission”.[2]

Pope Francis’ apology was positively received. President Paul Kagame, commenting on his meeting with the Pope on twitter, said that the meeting marked a “new chapter in relations between Rwanda and Catholic Church/Holy See”, and the Pope’s apology was an “act of courage”. In an official statement, Foreign Minister of Rwanda Louise Mushikiwabo said that the meeting was “characterized by a spirit of openness and mutual respect” and “a positive step forward in the relationship between Rwanda and the Holy See, based on a frank and shared understanding of Rwanda’s history and the imperative to combat genocide ideology.” However, the same statement reminded that “[Rwandan] genocide denial and trivialization continue to flourish in certain groups within the Church and genocide suspects have been shielded from justice within Catholic institutions.”[3]

Indeed, the Pope’s apology for the Church’s role in the Rwandan Genocide is, no doubt, a positive step that could provide some closure for the Rwandan people. As pointed out in the above-mentioned official statement, the Pope and the Holy See is now expected to work towards the recognition of the fact of the Rwandan Genocide among all Church members, and make sure that genocide suspects in the Church stand trial. Yet, ultimately, the Pope finally did the right thing with his apology with respect to the recent, legally acknowledged case of genocide that took place in Rwanda in 1994.

Perhaps now the Pope has a better understanding of the legal concept and term of “genocide” and can do also the right thing with regards his stance towards the 1915 events. As it is known, Pope Francis, for the sake of ecumenism and Christian solidarity, has been insisting on using the “Armenian genocide” narrative against the Turks, despite historical and legal facts proving that the 1915 events cannot be characterized as “genocide”.[4] Although the papacy was late to apologize for the Catholic Church’s role in the legally-established Rwandan Genocide that took place just a little over two decades ago in 1994, Pope Francis was rather rash after his ascendancy as pope to falsely accuse and defame Turks by labeling the controversial events that took place a century ago as “genocide”. The Pope, of course, is not expected to apologize for wrongfully labeling the 1915 events as "genocide" since the dogma of “papal infallibility” of the Catholic Church would not allow it. However, he can at least cease using the one-sided destructive "genocide" narrative that stigmatizes the Turks and also serves inter-religion polarization, and adopt a conciliatory attitude that would be congruent with his position as the spiritual leader of the Roman Catholic Church.