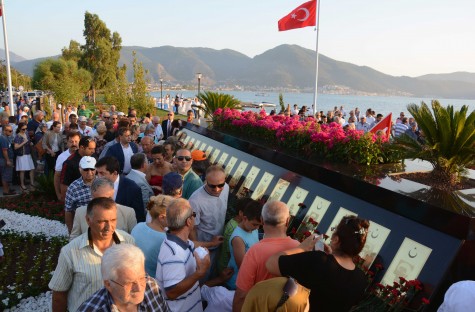 Monument of respect designed by the municipality of Fethiye for the memory of martyred Turkish diplomats who were assassinated by Armenian terrorist organizations ASALA and JCAG was opened with the participation of the families of martyred diplomats, delegation from the Ministry of Foreign Affairs and public.[1]

District governor of Fethiye Ekrem Çalık, Mayor Behçet Saatcı, Ambassador Erdoğan Kök representing the Ministry of Foreign Affairs, AVİM Director Ambassador (R) Alev Kılıç, senior officials from the Ministry of Foreign Affairs and other government institutions, citizens and some family members of diplomats who were slain by Armenian terrorist organizations were present at the opening ceremony.

The monument erected in the coastline of the Gulf of Fethiye exhibit the photos, names, duties, positions, dates of death and other information on martyred diplomats. There are Turkish flags placed in every corner of the monument and a map of Turkey with a Turkish flag inside. The monument decorated by different kinds of trees and flowers also has a remarkable landscape.

It is meaningful that a monument for Turkish diplomats assassinated on duty by Armenian terrorists was erected in Fethiye. Fethiye is a town which attaches great importance to martyrs. The town, formerly known as Makri, was renamed as “Fethiye” in memory of the first Turkish aviation martyr Fethi Bey who reached martyrdom after his plane crashed in Damascus during the First World War. Later in 2005, a monument dedicated to Fethi Bey was erected in Fethiye. Moreover, in 2001, Fethiye Martyrs Memorial was opened in memory of the martyrs who lost their lives during the Turkish War of Independence, Battles of Gallipoli, Cyprus Peace Operation and the Korean War. Every year, with the participation of citizens and senior officials, ceremonies to commemorate martyrs are held at these monuments.

Aside from this recent monument in Fethiye, Monument for Martyred Turkish Diplomats in Karşıyaka, İzmir and the Foreign Ministry Martyrs Memorial in the Cebeci Cemetery in Ankara are the only two monuments in Turkey dedicated to martyred Turkish diplomats. Also, following initiatives to erect a monument in Ankara in memory of diplomats who were victims of terrorism including Armenian terrorism, former Minister of Foreign Affairs Mevlüt Çavuşoğlu made the promise for a monument on the ceremonial grounds of the new Foreign Ministry premises which is under construction.[2]

As it is seen above, there are a very limited number of monuments in the memory of Turkish Foreign Ministry officials and other government officials, and their wives and children who were victims of Armenian terrorist organizations while they were carrying out their duties and representing their country. Therefore, the municipality of Fethiye sets an example to other municipalities especially today where Armenian claims distorting history, law and historical facts are blatantly voiced. The best way to enshrine the memories of martyred Turkish diplomats and to condemn Armenian terrorism is to spread the number of such monuments across Turkey.