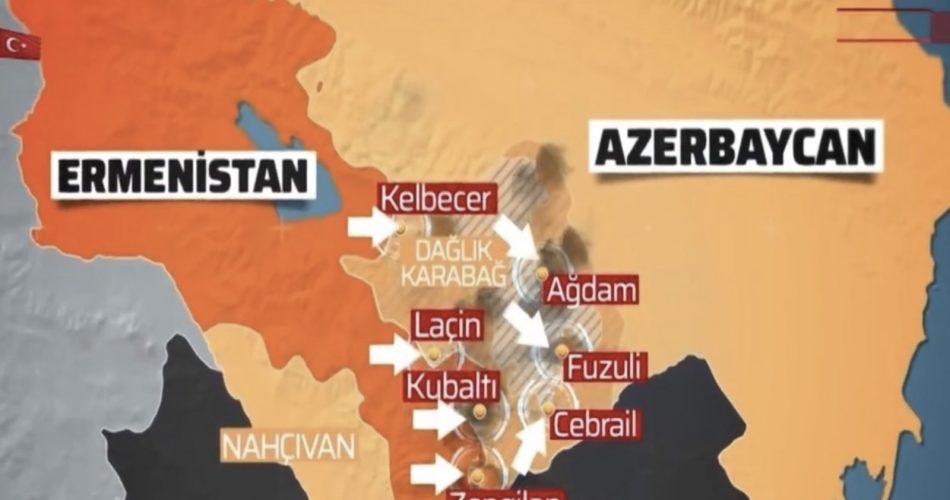 We see that hot clashes have begun once again between Armenia and Azerbaijan as from 27 September after the Tovuz skirmishes in July which took place at the northern border province between Azerbaijan and Armenia. Dissimilarly from the short-term skirmishes between the two countries in July at the northern border, the operations that are being conducted since Sunday are focusing on the Nagorno-Karabakh region. There are some news reports coming from the region that Armenia is suffering heavy losses and lost some strategic positions in the clashes around the Talışlar (Talish) – Magadiz line and Hocavend (Martuni) Füzuli line[1]. Thus, Armenia declared Martial Law immediately after these clashes.[2]

Tension between these two countries has been escalating since the day Pashinyan delivered a speech in Khankendi stating that “Nagorno-Karabakh is Armenia.” We analyzed the reasons during the Tovuz skirmishes which pushed Armenia to attack on Tovuz. However, the clashes in Nagorno-Karabakh today are based on different reasons.

Some conclusions could be made from that. One of those is the fact that it is not possible to obtain results from the OSCE Minsk process due to the position of Armenia. Armenia declared with this strategy paper that it is completely closed to the alternatives for reconciliation. On the other hand, the expression of Nagorno-Karabakh and Armenia as the same administrative unit at the beginning of the strategy gives us a clue about the main purpose of Armenia. Keeping this information in mind, it is necessary to mention another document.

On 15 September, “7 principles” on the settlement of the Nagorno-Karabakh conflict were declared after the security council meeting conducted by the de facto Nagorno-Karabakh administration. It is seen that acceptance of de facto Nagorno-Karabakh administration in the international community has been aimed in parallel with the new security strategy of Armenia. It is mentioned that any proposal damaging the sovereignty of Nagorno-Karabakh will not be accepted, and military operations might be considered to protect this if it is necessary. Moreover, it is stated that “...if it is necessary, aggressions can be carried to the territory of Azerbaijan.” However, despite this threatening approach, it is mentioned that some guarantee mechanisms should be established in order to prevent any future attacks against Nagorno-Karabakh.[3] As it can be understood from these principles, the Armenian administration caused Azerbaijan to lose its hope on the resolution process, that this matter can be solved at the table. In fact, being aware of the impact of her "solution" proposals, they needed an international assurance mechanism against any military intervention.

From this perspective, to what level the threat perception of Azerbaijan has reached becomes more understandable. In addition, the question on why the skirmishes broke out again is answered exactly at this point. The first spark in triggering the conflict comes from this attitude of Armenia. As a matter of fact, the decision of the Nagorno-Karabakh administration to move the “parliament” from Hankendi to Şuşa after the skirmishes in July can be interpreted as them being aware of the atmosphere created.[4] Although it does not look like a significant change of position when viewed from the map, the city of Şuşa is a very strategic location. Compared to Hankendi, it is closer to the Armenian side, on the Lachin corridor connecting Nagorno-Karabakh to Armenia and is a high-altitude city. It is a city with a historical castle, which has been held by actors who wanted to control the region throughout history. Therefore, it seems that the ethnic Armenian military forces in Nagorno-Karabakh wanted to move to a place where they could better protect themselves against possible conflicts.

Finally, it is seen that Armenia has been holding intense talks with the top-level OSCE Minsk co-chairs to stop the operations and has been making various accusations against Turkey and Azerbaijan. At this point, it is useful to understand the portrait Armenia is trying to create of Turkey.

The claims of Armenia about Turkey

During the Tovuz skirmishes, it was seen that Turkey gave its solid support to Azerbaijan according to the necessities of friendship and regional cooperation. Turkey immediately responded due to Tovuz having a key position in the regional projects between Azerbaijan-Turkey-Georgia, and it organized joint military exercises with Azerbaijan. This situation caused great disturbance in Armenia.

Armenia made some claims to question the legitimacy of this cooperation. Turkey was attempted to be drawn into the conflict through the groundless allegations that the Turkish army settled some militants from Syria to Azerbaijan[5] mentioned by Armenian Foreign Minister Zohrab Mnatsakanyan in the interview of the Al Akhbar newspaper in Egypt. Of course, the main purpose here is the desire to benefit from the atmosphere against Turkey which already exists in the international public opinion. The fact that those allegations were mentioned in Egypt, which has tense relations with Turkey, clearly shows the true intention of Armenia. On the other hand, through this allegation, it is attempted to introduce the cooperation between Turkey and Azerbaijan as an illicit and terror-related cooperation.

Such a thing is out of the question, and we can say that similar claims are made about Armenia. As it is included in the AVIM bulletins in the past years, there is a guerrilla organization named Ozanyan Battalion which clashed against Turkey together with PKK/PYD in Syria. According to the allegation made by the Cairo24 news website, some militants from there are being settled in Nagorno-Karabakh by Armenia.[6] It is known that Armenia and the so-called Nagorno-Karabakh administration have recently settled Armenians from Lebanon and Syria in these regions. Therefore, the possibility of said battalion to be placed in this region, seems more plausible than the claim against Turkey about sending militants to the region.

Besides from this, Armenia continues to make various claims of the existence of Turkey regarding the conflicts that have been ongoing since September 27. Statements are being made that Turkey is the side they are clashing with, not Azerbaijan.[7] It seems that the attention of both Russia and Western countries are attempted to be drawn to the region with the allegations regarding Turkish F-16s shooting down the Armenian jets[8].

As it will be remembered, Armenia, which is still in a difficult period in terms of its relations with Russia, did not receive the support from Russia at the expected degree in the Tovuz attacks. Nevertheless, the idea of benefitting from the bilateral relations between Turkey and Russia, which are shaped around delicate balances in Syria and Libya, has not lost its actuality. The wish to create a perception of Turkey having an active role in the conflict stems from this. However, due to their strong mutual communication channels based on the existing collaborations between Russia and Turkey, Armenia does not seem to find any return for its move.

On the other hand, the possibility to utilize the anti-Turkey climate in the EU due to the Greece and Eastern Mediterranean disputes is still an important issue for Armenia as much as Russia’s support. Considering the close relations of the Pashinyan administration with European countries such as France, it is understood that they aim to “hit two birds with one stone” with this anti-Turkey policy so to speak. However, under the leadership of Germany, during the “constructive dialogue” efforts with Turkey these days, this effort of Armenia does not seem to find response. Moreover, this effort of Armenia may cause Russia to react more.

During the Tovuz skirmishes, Russian officials stated that international actors have begun to take sides and because of this Russian leadership might be more appropriate. From this proposal of Russia, it can be concluded that it is uncomfortable with the attitudes of the other co-chairs from outside the region. This interpretation seems quite understandable with regards to Russia, which is disturbed by threats such as Armenia's shift to a more Francophone line or NATO's expansion to the east. Considering that the current format of OSCE has not operated fairly and impartially since 2010, it is understood that Russia is as uncomfortable with this situation as Azerbaijan.

It seems that the Pashinyan administration's request for support from the international public opinion regarding the ongoing conflicts will not please Russia.

How Do The Conflicts End?

It seems that a mechanism that can act fairly on both sides is needed for the conflicts to end. The deterioration of the justice balance in the current format causes a situation against Azerbaijan. For this reason, Azerbaijan is trying to attain in the field what it cannot find on the table. However, of course, for a permanent solution, the success shown in the field should be supported on the table.

In this respect, Turkey's Foreign Minister Mevlut Cavusoglu stating that full support will be given to Azerbaijan, that Turkey is doing and will do its best for a negotiate climate is quite substantial. Mediation offers are also being made from Russia. Moreover, there is information regarding meetings being conducted between Turkey and Russia on how to ensure sustainable peace.

Sergey Lavrov’s statement “Russia is in favor of returning the five occupied regions to Azerbaijan, deploying peacekeeping forces in the region and re-establishing the transportation-communication system within the resolution process[9]” from the recent meeting with Azerbaijani Parliament Speaker Sahiba Gafarova was reflected in the press. This statement brings to mind the "corridor formula" that existed in the early 2000s. According to this formula, which was first voiced by Paul Goble at the end of the 1980s, in order for Azerbaijan to be connected to Nakhchivan, it was planned to open a narrow corridor from the Armenian town of Meghri at the Iranian border. In return, Armenia would be able to connect to Nagorno-Karabakh with the help of the Lachin corridor.[10] It seems possible to see an adapted version of this proposal, which was not accepted that day despite of Heydar Aliyev's intense efforts, on the table in the upcoming period.

[2] “At least 16 dead in Armenia-Azerbaijan clashes over disputed region,” The Guardian, 27 September 2020, https://www.theguardian.com/world/2020/sep/27/armenia-martial-law-clashes-azerbaijan..

[6] Vasif Huseynov, “Another war on the horizon in the Armenia – Azerbaijan conflict?,” Euractiv, 22 September 2020, https://www.euractiv.com/section/global-europe/opinion/another-war-on-the-horizon-in-the-armenia-azerbaijan-conflict/.