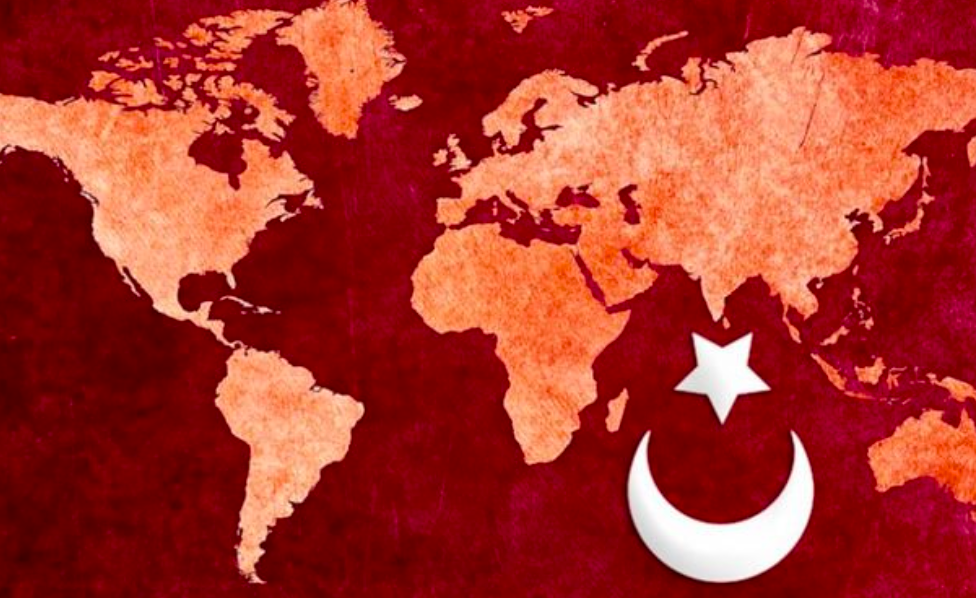 According to the generally accepted definition, the crimson (red) apple, which symbolizes a goal and purpose, first emerged as an image that was born among the Turks in Central Asia, was included in history and literature during the Ottoman period, and symbolically represents the concept of conquest and sovereignty for the Turkish states. The crimson apple ideal was elevated to a higher level with Ziya Gökalp, who took an active role in the birth of Turkish nationalism. Gökalp’s work of the same name, ‘Crimson Apple’, which was published in the Second Constitutional Period of the Ottoman Empire, is associated with the Turan ideal, a branch of Muslim-Turkish nationalism that rose under the rule of the Committee of Union and Progress after the Young Turk Revolution of 1908. The concept was also used to reflect the mood of the nationalists who became pessimistic during the Balkan Wars and the First World War.[1] But why is this concept being referred to today?

In 2018, a Turkish soldier involved in Operation Olive Branch in Afrin, Syria, was asked, “Where are you headed?”, to which he answered “towards the Crimson Apple”. At that time, Turkish President Erdoğan, referring to the words of the soldier, stated, “We have a crimson apple. We are heading towards that goal ”. Various debates arose in those days about the purpose of using the concept of the crimson apple. Later, comments were made from state officials that this concept should be perceived as “the goal of the Republic of Turkey to live in peace, tranquility, prosperity, and independence with all its citizens”.

When the slogan “Our objective is the Crimson Apple” was featured in the historical TV series “Payitaht Abdulhamid”, which centers around the Ottoman sultan Abdulhamid II, rumors emerged that a collective consciousness was being created in the public.[2] In 2020, the concept of crimson apple emerged again, this time in a video clip prepared by the Turkish Presidency’s Directorate of Communications, which yet again stimulated related discussions.[3] After this concept being mentioned frequently in recent years, opinions began to emerge that drew connections between the Turkish-Islamic focus of the concept and expansionist aims.[4] The main point that makes the use of the crimson apple controversial is the Republic of Turkey developing its relations especially with Azerbaijan and the Central Asian republics alongside this concept, prompting some commentators to increasingly tie this concept to expansionist ambitions.

During and after the 2020 Nagorno-Karabakh War, Turkey’s aid and support to Azerbaijan regarding Karabakh was evaluated by some parties as an ideological expansion that overlaps with the crimson apple concept. However, the long-running friendly relations between Turkey and Azerbaijan, which share many historical and cultural common values, will suffice in explaining Turkey’s support to Azerbaijan in the Karabakh War. When Turkey’s relations with the Central Asian republics are examined, it will be seen that especially after the collapse of the Soviet Union, the fall of the iron curtain and the independence of the Central Asian republics enabled Turkey to establish ties with the states in this geography and opened the way to develop relations. Therefore, it would be wrong to associate Turkey’s strategies focused on improving relations with the states in question with an expansionist ideology and tie this to the concept of crimson apple. The main question that should be asked is why Turkey’s development of relations and cooperation with the Central Asian republics, with which it shares common values and has cultural ties, is not perceived as a natural process. In a previous article, we had mentioned[5] the centers jointly opened by the French Cultural Institute and the German Goethe Institute in the Balkans and Iraq. This joint venture, used in reality as a foreign policy tool, was established under the guise of cooperation in the cultural field, despite there already being a Europe-wide common cultural institution. Since this joint venture has not been subjected to any questioning, it would be inconsistent to question Turkey’s relations with Azerbaijan and the Central Asian republics, with which it shares many common values, and to attribute this to an expansionist policy.

Although the crimson apple was used as a symbol of the expansion of the empire against western countries in the Ottoman period, this concept is shaped according to the current culture and conditions of every period. Instead of perceiving this concept in the context of an expansionist policy, it will be more appropriate to perceive it as part of a historical and natural process in Turkey’s relations with its neighboring countries.