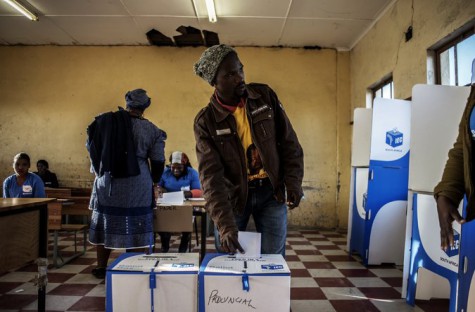 South Africans lined up by the hundreds at polling stations, less to choose from a long list of parties than to pronounce judgment on the A.N.C., the liberation movement that has governed since the end of apartheid in 1994 but which has become mired in corruption scandals in recent years. Polls have predicted that, though the A.N.C. will steamroll to another victory, it will garner fewer votes than in the past.


It was too early to say how the voting was proceeding in several poor, black townships surrounding Johannesburg, where rioting youths, angry at living conditions, have held protests for months and tried to bar the A.N.C. from their communities. Rioters in one such township, Bekkersdal, set fire to polling stations overnight.

In Marikana, about 70 miles northwest of Johannesburg where the police killed 34 miners involved in a wildcat strike in 2012, voting started peacefully. Last week, Mr. Zuma canceled a visit here at the last minute, a few days after protesters angry at the government’s handling of the strike and its aftermath burned down an A.N.C. office. But several voters at one station near a squatters’ camp voiced support for the A.N.C., underscoring the party’s continuing strength even in places with many disaffected residents.


“I thought my vote would make a difference and bring jobs,” said Aram Lentsa Kgahloe, 38, a day laborer who had lined up at 2 a.m. to be first in line and who had voted for the A.N.C. “I know the party’s history.”

The Economic Freedom Fighters, a party founded less than a year ago by Julius Malema, the former head of the A.N.C.'s youth wing, has been attracting disaffected young voters here and in the townships with its message of nationalizing mines and other economic assets without compensation.

In 2009, the A.N.C. won just under two-thirds of the vote. Mr. Zuma predicted that this time his party would capture a two-thirds majority, which would grant it greater powers to govern as well as give it a badly needed mandate. Polls have predicted, however, that the party’s support will shrink by a few percentage points.


That would still keep the A.N.C. as the dominant force in the 400-seat Parliament, which elects the president. By law, Mr. Zuma is limited to two terms as president. Analysts have said, however, that if the A.N.C. gets less than 60 percent of the vote, his standing in the party and as president could be at risk.

Mr. Zuma became president five years ago only after a corruption case against him was dropped at the last minute. His standing declined steadily during his first term amid charges of financial impropriety, so much so that he was booed loudly during a national memorial for former President Nelson Mandela in December and was humiliated in front of the world leaders in attendance. In March, South Africa’s anticorruption watchdog released a report detailing how $23 million in public funds had been misused to make upgrades to the president’s rural homestead in Nkandla.


After long ignoring the report, Mr. Zuma said on Monday that voters did not care about the $23 million in upgrades. Only “the bright people” cared, he said, mentioning the news media and the political opposition. Mr. Zuma also surprised many by arguing that the upgrades were necessary to ensure the safety of his homestead because criminals invaded the property 15 years ago and raped his wife.

Live television coverage on Wednesday showed Mr. Zuma, surrounded by a scrum of journalists, aides and bodyguards, voting at a polling station in Nkandla, which is located in KwaZulu-Natal Province, southeast of Johannesburg.


As corruption has become entrenched, the A.N.C. has drawn fierce criticism from longtime allies, including Archbishop Desmond M. Tutu, who was awarded the 1984 Nobel Peace Prize for his fight against apartheid. Archbishop Tutu was quoted in the South African news media as saying that he was glad that Mr. Mandela was not alive to witness the direction in which the A.N.C. has taken the country.

Former allies of the A.N.C. and defectors have formed other parties contesting Wednesday’s election. Other A.N.C. dissidents led a “Vote No” campaign that urged South Africans to support other, smaller parties or spoil their ballots as a protest against the A.N.C.


According to official statistics, just over 25 million South Africans — almost half the estimated population of 53 million — are registered to vote, representing about three quarters of the eligible electorate. Registration is much lower, however, among the so-called “born frees,” 18- and 19-year-olds who grew up with no direct experience of apartheid.