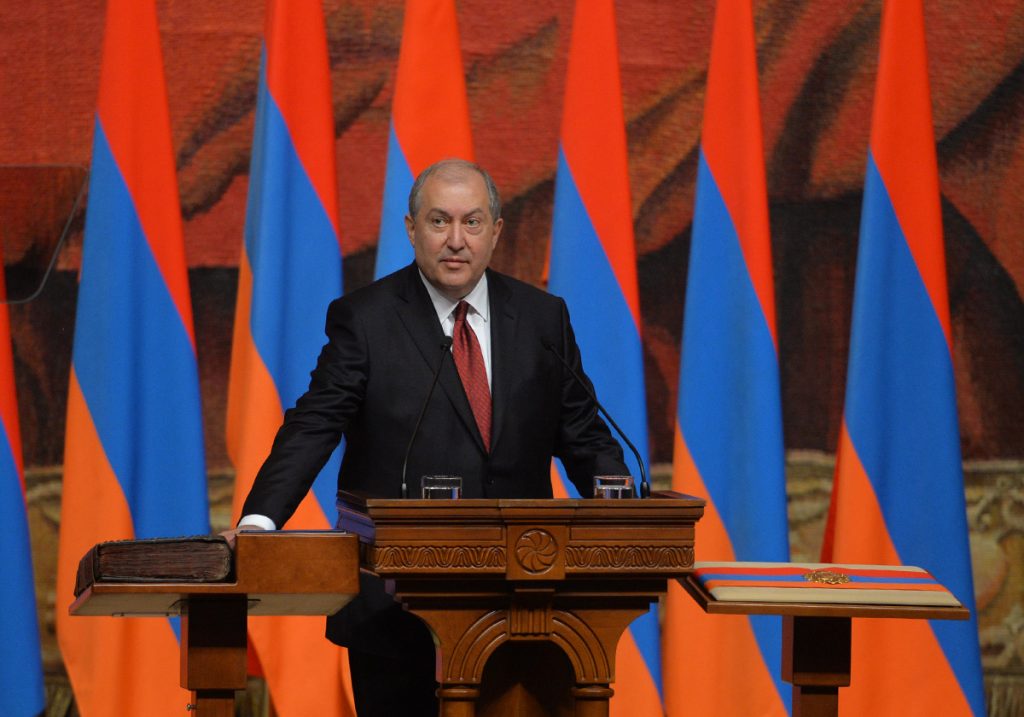 Armenia’s transition from presidential to parliamentarian system that was initiated by the December 2015 constitutional amendments had sparked controversies from the very beginning. As has been explained in two previous commentaries published by AVİM,[1] at the core of these controversies lied the suspicion that the real motive hidden behind the change in the system of government was the will to extend Armenia’s third president Serzh Sargsyan’s grip of power. Thus, it has been discussed that parliamentarian system will pave the way for Sargsyan to continue his rule over the country by becoming the PM, hence the head of the executive. In fact, these proved to be correct as the Republican Party of Armenia (RPA), the ruling party, declared its decision to nominate S. Sargsyan for the PM on 14 April. On 16 April, the RPA officially nominated its leader S. Sargsyan in the Parliament. Today (17 April 2018), the Parliament assembled to vote to elect S. Sargsyan as the PM.

The RPA holds 58 of the 105 seats in the Parliament. S. Sargsyan’s candidacy is also supported by the Armenian Revolutionary Federation. The "Tsarukyan" faction adopts a neutral stance. The only opposition to S. Sargsyan’s election comes from the Yelq bloc, which has only nine seats in the Parliament. Therefore, it is clear that its opposition will not be enough to prevent S. Sargsyan’s election. The public protests that have been going on for the last few days in Yerevan are not likely to change the course of the events, as well. Therefore, although by the time that this commentary was published (17.04.2018: 14:20) the result of the vote has not been announced, we can assume S. Sargsyan will be announced as the new PM of Armenia by the end of the day.

S. Sargsyan became the president in 2008. Before him, Robert Kocharyan, the then leader of this party, served as the second president of Armenia between 1998 and 2008. As such, whereas S. Sargsyan’s rule in Armenia lasted ten years, the RPA’s rule has been extended to twenty. In other words, Armenia has been ruled by the same political entity for the last two decades and it will continue holding power for at least another four years, until the next parliamentary election in 2022. In these twenty years, the RPA fostered its authority on the political, economic, social and other domains through promoting a certain ideological outlook that eventually influences Armenia's domestic and foreign policies.

The inauguration speech of the newly elected President Armen Sarkissian that he delivered on 9 April is, indeed, a display of this ideological outlook.[2] In this commentary, A. Sarkissian’s speech will be analyzed in order to discern various aspects pertained to the ideological perspective that was established during the years of RPA rule, which, most probably, will be sustained, if not boosted, in the coming years.

Armenian exceptionality and the “Armenian genocide”

A. Sarkissian decorated his speech with kudos to “diligent,” “talented,” “wise” Armenian people, the “heroic past,” and the “historical achievements” of Armenia and so on. In fact, such kudos are common rhetorical elements in the speeches, declarations, statements of the politicians all over the world. Likewise, his statements about the accomplishments of Armenia since 1991are also familiar rhetoric. Still, the instrumentality of such rhetorical elements in installing the idea of the “Armenian exceptionality,” which is a major aspect of the dominant Armenian narrative should also be acknowledged.

One of the pillars of the Armenian national narrative that constructs and hails the “Armenian exceptionality” is the 1915 events, about which an enormous global campaign is carried out for decades to frame those events as a genocide, although the way to do so is to appeal to competent courts defined by the 1948 Genocide Convention.

In his speech, A. Sarkissian, not surprisingly, mentioned the “Armenian genocide” stating that,

The great tragedy that the Armenian people suffered 100 years ago during the years of Mets Yeghern serve a lesson of vigilance to everyone. Therefore, recognition of the Armenian Genocide is not an end in itself. The international recognition and condemnation of this appalling crime against humanity is an important step on the way to having it ruled out anywhere in the world.

With these words, he replicated one of the recently habituated propaganda of Armenia that the recognition of the “Armenian genocide” is not a punitive, but a preservative measure.

One of the noticeable aspects of A. Sarkissian’s speech is the salience of the references to the Nagorno-Karabakh conflict. In his speech, A Sarkissian laid stress to the “peaceful and negotiated settlement” of the conflict as a “crucial” issue for Armenia. Doing that, he alleged the “invaluable experience [of the Armenian people] of coexistence with different peoples” and that “[the Armenian people] are creators, peacemakers, and a peace-loving people,” despite the fact that whether the late history of the Armenians really confirms this rhetoric is an open question. Nonetheless, the emphasis on the need for a “peaceful and negotiated settlement” is, indeed, a rightful evaluation of the situation considering that the continuation of this conflict costs Armenia economic and political isolation in the region.

Having said that, it should also be added that, in Sarkissian’s speech, inconsistent and controversial statements related to Nagorno-Karabakh conflict leap out, as well. On the one hand he emphasizes “peaceful and negotiated settlement", on the other hand refers to “powerful” and “victorious” Armenian army. In his speech, A. Sarkissian stated:

And today no one should doubt that Armenia and the entire Armenian people will stand by Artsakh and fight for its legitimate rights: yesterday, today and tomorrow.

Glory and honor to our people and our heroes. Glory to Armenia’s victorious army!

In his speech, A. Sarkissian stated that “the victorious liberation war [Karabakh War] brought us back to our national dignity. It uplifted our spirit.” This expression is an expression of the fact that for the Armenians the military success in the Karabakh war has a sentimental/ideological significance as a battle that was won after centuries of defeats. Such sentimental/ideological construction of the Nagorno-Karabakh conflict is one of the main reasons that prevent the rational evaluation of the conflict and the possible way outs. Accordingly, the emphasis on “powerful/victorious army” is not inconsistent regarding the fact  that the alternative to a peaceful resolution of the Nagorno-Karabakh conflict that can only be achieved through rational argumentation, mutual compromise and respect to international law is nothing, but war.

Lastly, A. Sarkissian’s speech also reveals that, Armenia is a direct party of the conflict, despite its rejection of having been so to curtail the state of occupation in and around Nagorno-Karabakh for the fact that this reality invalidates the argument of “right to self-determination”.

In his speech, A. Sarkissian frequently referred to the unity of Armenia, Nagorno-Karabakh, and the diaspora. At times, he spoke as if he is not only the president of the Republic of Armenia but also the Hayots Ashkhar, the Armenian World, made up of these three entities.

A. Sarkissian’s emphasis on the unity of this trio is an epitome of the dominant understanding of the “nation” among Armenians. Both the Armenian elite and the people envision the Armenian nation as an extra-territorial and ethnicity-based entity. This understanding, however, excludes non-Armenians, such as the ethnic Russians and Yazidis in Armenia from the national imagination, and as a consequence, reduces them to denizens rather than true members of the nation. Such a mindset that defines the nation in reference to ethnicity contradicts with A. Sarkissian’s above mentioned claim about Armenians’ preparedness for “coexistence with different peoples” and peaceful solutions to conflicts.

Related to the imagination of the Armenian nation, the following words of A.Sarkissian also stands as another controversial point: “The Church is the most important pledge and pillar of our national unity, a universal and national structure that has rallied the nation for many centuries.”

Such an exclusionary and non-secular understanding of nation is obviously inconsistent to the values such as human rights, and liberal, pluralistic, and inclusionary democracy. Such ethnicist and church-based understanding of nation also refutes A. Sarkissian’s claim that “we managed to build a country strong with solid statehood, vision of open society, guided by universal values.”

All in all, A Sarkissian’s inaugural speech reveals that the attempts to frame the 1915 events as genocide by sidestepping the necessary legal actions will continue. In fact, this is not unexpected give that the “genocide” has been turned into a myth in the sense that the renowned scholar of nationalism Anthony D. Smith uses to define one of the core elements of nation building, and one of the main elements of the contemporary Armenian identity. In fact, In fact mythicizing of the 1915 events prevents constructive debate on this case, hence the resolution of the dispute arising from this historical episode. Secondly, A. Sarkissian’s speech demonstrates that the Nagorno-Karabakh conflict remains the most crucial issue of Armenia. Despite the rhetoric of “peaceful resolution,” sentimental/ideological construction of the Nagorno-Karabakh conflict hinders its resolution through rational argumentation, mutual compromise and international law. Consequently, military confrontation stands as the only means for the “resolution” of the conflict. Lastly, A. Sarkissian’s speech unearths the imagination of the Armenian nation as an extra-territorial ethnic and religious community that defies a civic understanding. Such an understanding is not only contradictory to “universal values” that A. Sarkissian referred to in his speech, but also to the prospect of building peace and prosperity in the South Caucasus.

[2] The official English translation of this speech  was published at http://www.president.am/en/statements-and-messages/item/2018/04/09/President-Armen-Sargsyans-speech-during-inauguration-ceremony/ (accessed April 17, 2018).