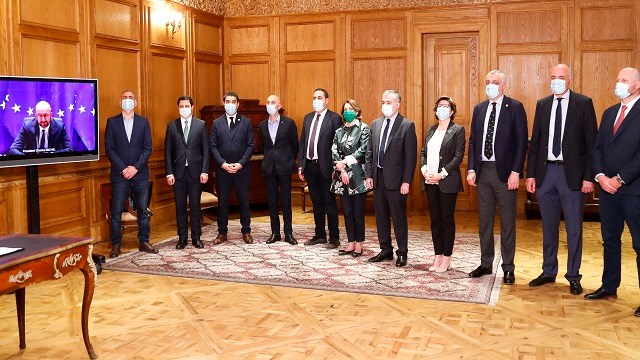 Last month, there were significant developments regarding the political crisis in Georgia. Although these concerned problems about Georgia’s internal affairs, they were followed by the international community, with the EU involved in the process. Therefore, we are focusing on these developments, which have gained momentum since March. As all these seem now to be over, it would be useful to summarize what has transpired in the meantime.

On 16 April 2021, Georgian Parliament Speaker Arhcil Talakvadze announced that the ruling Georgian Dream Party is ready to sign the EU-mediated deal. As will be remembered, to end the political deadlock between the ruling party and the opposition in Georgia, the President of the European Union Council, Charles Michel, had been trying to persuade both sides to compromise since the beginning of last March. As it will also be remembered, a special representative of the head of the European Council, Mr. Christian Danielsson, had started negotiations with both parties in Tbilisi. He had presented a document to resolve the political crisis in the country. However, these negotiations headed by the EU had been unsuccessful, as the parties failed to reach an agreement. The failure of the negotiations had been about the early elections and the release of political prisoners. For these reasons, Talakvadze’s statement mentioned above in April was an indication that the process had started to improve.

On 18 April 2021, Charles Michel, the President of the European Council, took the stage and presented a new package of proposals. This new document contained some new ideas regarding the political crisis in the country. According to Michel’s document, Nika Melia, the leader of the main opposition party, and Giorgi Rurua, the owner of one of the TV channels in Georgia, should be released, and early elections should be announced “if the ruling Georgian Dream party receives less than 43 percent of the proportional votes in local elections in the fall of 2021.”[2] All but the two opposition parties signed Mr. Michel’s new document in a short time. However, some politicians among members of the opposition parties which refused to sign the agreement approached the situation differently. For instance, Salome Samadashvili was one of them. Contrary to the line adopted by her party, she signed the document and said, “By signing this document today, Georgia is making a step forward toward Europe, that’s why I have decided to sign it.”[3]

In a short while after the signature of the document mentioned above by most of the parties, the opposition MPs started to return to the parliament. They started to work on a bill that foresees amnesty for the participants in the 2019 events that triggered the present situation in Georgia. Although Nika Melia, the head of the opposition United National Movement party, has not been released yet, some steps to ameliorate the situation in the country have been taken following the agreement signed under the mediation of the EU. Whether the other conditions in the deal will be fulfilled are surely to be followed by Brussels as in Tbilisi.

[2] “Georgian opposition to return to parliament with amnesty for political prisoners on top of agenda,” Jam News, April 21, 2021, https://jam-news.net/georgian-govt-opposition-standoff-at-an-end-whats-in-the-new-agreement/.