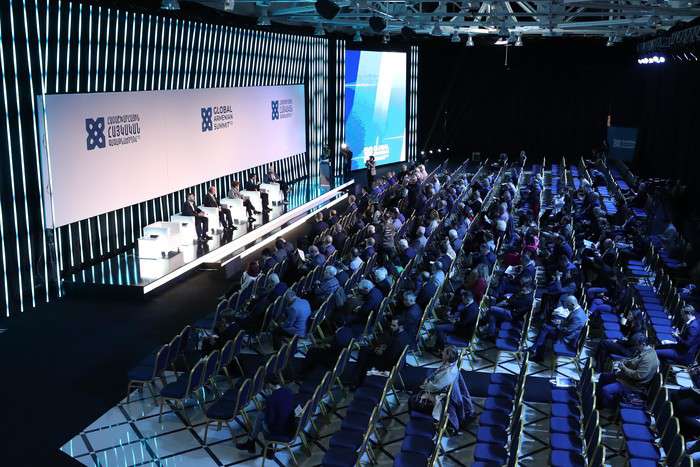 On 28-31 October an event titled “The Global Armenian Summit” was held in Yerevan. Organized by the Office of the High Commissioner for Diaspora Affairs of the Republic of Armenia, about 600 participants from more than 50 countries were invited to this event. More than 100 speakers from 15 countries spoke about various issues related to Armenia-Diaspora relations at a total of 25 panels.

In the official website of the summit[1]the objective of the summit is explained as “serv[ing] as a new format and a dynamic platform for discussing challenges and problems of universal importance for representatives of the diaspora and local partners.” Defining the “priority areas” and the “roles and responsibilities” in Armenia-Diaspora relations; setting out “a roadmap for Armenia-Diaspora relations;” and creating and institutionalizing “processes and programs” through which Armenia and the Diaspora may engage with each other are stated as the purposes of the summit. It is announced that the “proposals, solutions, and results achieved at the summit” will be the basis of a prospective “Armenia-Diaspora strategy document to be adopted by the Republic of Armenia government.”

For those who study post-1991 Armenian politics and Armenia-Diaspora relations, there is nothing new or interesting in these statements.* In fact, we have been observing basically the same things for the last thirty years. As such, the Summit itself refutes Pashinyan’s suggestion in his opening remarks at the Summit that a new approach and modus operandi are needed with respect to Armenia-Diaspora relations. We thus see a big gap between theory and practice.

This dull reality is a quite telling phenomenon. Though the Armenian diaspora is said to be a major asset of Armenia, which it theoretically is, the last thirty years have proven that, in practice, it is rather a complication. Put differently, whereas the Armenian diaspora could really become an asset for Armenia, so far this has not been the case. On the contrary, the Diaspora turned out to be a nuisance for Armenia in most of the post-Soviet era. The reasons of this bizarre reality could be debated at length. One of the reasons has to do with the very foundation of the post-WWI Armenian nation building project that rests on the ideas of perpetual victimhood, exceptionality of the Armenian nation, and ceaseless animosity towards the perceived enemies. The Armenian national narrative constructed upon these notions is the biggest obstacle against adopting realistic and rational outlooks and solutions to the challenges that both Armenia and the Diaspora face. Lacking a realistic and rational approach, the same old issues repeatedly appear on the agenda.

One of the important, yet not unprecedented, emphases of the Summit was the need to enhance Armenia-Diaspora relations “from the lens of state-centrism.” The vision statement of the Summit[2] explains this as the Armenian state being prepared to serve as the “‘hub’ or the foundation upon which processes, institutions and networks are built in advancing the interests of the broader nation, and that solidify, strengthen and reinforce Armenia-Diaspora relations.” Prime Minister Pashinyan in his speech, on the other hand, puts this idea as “The first Global Armenian Summit aims to become a platform and a meeting place for people who want and are ready to make the state interest of the Republic of Armenia a pan-Armenian agenda, have their contribution to the advancement of that interest, to support the institutional accomplishment and strategic development of the statehood as a modern state able to meet the challenges of the 21st century.”

As mentioned above, the perspective of “state-centrism” in Armenia-Diaspora relations is not unprecedented. Indeed, this perspective has had advocates since 1991, such as the first president of Armenia Levon Ter Petrosyan. Yet, it has have never been fully formulated and operationalized. Despite that, it could be observed that “state-centrism” has been gaining more supporters in the Diaspora in the recent years, which could be perceived as a positive development. Yet, again, there is no concrete progress in this direction other than statements. One of the main reasons of this failure is the problems in the way in which the Armenian nation is defined. The following quote from the vision statement of the Summit is quite significant in this regard.

Nation-states such as Armenia which encompass large Diasporas encounter the wider responsibility of accounting for two types of members: citizens/residents who live within the territory of the state and members of the broader nation who reside in the Diaspora. It is often necessary to formulate legal, institutional, and infrastructural mechanisms and networks to accommodate these two types of members (emphasis added).

As can be seen from this quote, despite the rhetoric of “state-centrism,” Armenia defines the Armenian nation not in terms of citizenship, but ethnicity. This approach not only refutes civic understanding, but also creates many practical problems for Armenia with respect to accommodating non-citizen ethnic Armenians into Armenian political processes. In fact, this is again a thirty year-long story, which has appeared again and again with the same old rhetoric. Related to that, it is striking that within these years Armenia has not been able to create substantive institutions to achieve this goal. The abolishment of the Ministry of Diaspora in 2019, eleven years after its establishment in 2008, not to speak of countless proposals and discussion on questions on diaspora representation in Armenia could be highlighted as to this incompetency.

Actually, this summit has been yet another occasion exposed the everlasting disagreements, competition, and even enmity between different political groups in the ‘Armenian world.’ Though the Summit was advertised as a “pan-Armenian” event, some influential diaspora actors were not invited to the event. Most importantly, the Armenian Revolutionary Federation-Dashnaksutyun (ARF) and its subsidiary organs were not called in, which caused fury among the Dashnak circles. Though this might seem questionable at first sight, this decision of the Armenian government makes sense from the declared “state-centric” standpoint when one takes into account the highly subversive ideology and practice of the ARF, which even called for an uprising against the Pashinyan government in December 2021. As to the pan-Armenian nature of the Summit, another noteworthy matter is Catholicos of All Armenians Karekin II’s and the Catholicos of the Great House of Cilicia Aram I’s refusal to attend the Summit. The refusal of the two leaders of the Armenian Apostolic Church to attend the Summit reveals that despite the habitual emphasis on the unity in the ‘Armenian world,’ serious fractures are a fact in this sphere.

In the present, the most salient cause of discord in the ‘Armenian world’ is the different views on Armenia’s relations with its two neighbors, namely, Azerbaijan and Türkiye. The Armenia-Azerbaijan and Armenia-Türkiye normalization efforts induce serious debates both in Armenia and the Diaspora. Whereas radicals categorically oppose normalization, the Pashinyan government ostensibly support this prospect. Yet, the rhetoric of the Pashinyan government should not lead to naïve conclusions about Yerevan’s good will as to the prospective normalizations. Rather than taking true steps, Pashinyan government plays the same old game of paying lip service and maneuvering between the US, the EU, Russia, and Iran to slow down the normalization process as it believes foreign intervention in this process may provide some advantages to achieve some unreciprocated concessions from Azerbaijan and Türkiye. This unconstructive approach of Yerevan, actually, manifested itself with the invitation of Fotis Fotiou, the Greek Administration of Southern Cyprus Commissioner for Overseas Greek Cypriots and Andreas Katsaniotis, the Deputy Minister of Foreign Affairs in charge of Diaspora Greeks and Public Diplomacy, to the Summit.  Fotiou’s and Katsaniotis’ attendance to the Summit shows that Pashinyan government is no different from the ARF and other radicals when it comes to continuing enmity by creating oversees alliances with Turcophobes. As to that, it should be noted that in recent years Armenian, Greek and Greek Cypriot diasporas encouraged by Athens, Nicosia, and Yerevan have formed a unified front to lobby against Türkiye and Azerbaijan, a fact which negates Yerevan’s rhetoric about friendly relations with its neighbors.

All in all, “The Global Armenian Summit” has not been an event that brought anything new. Rather, it showed that the same clichés, conflicts, and modus operandi still dominate the Armenia social and political domains. We are thus forced to ask whether it was worth spending 768,000 US Dollars for this four day-long event.

* The author of this commentary Dr. Turgut Kerem Tuncel is also the author of the book “Armenian Diaspora: Diaspora, State and the Imagination of the Republic of Armenia,” which is the slightly revised version his doctoral dissertation titled “Mayr Hayastan Im Hairenik: Memory and the Politics of Construction of the Armenian Homeland” that he defended in June 2014 at Università degli Studi di Trento Sociology and Social Research Doctoral Program. In his book, Dr. Tuncel examines the construction of the Republic of Armenia as a homeland after the collapse of the Soviet Union along the Armenia-Diaspora nexus through the analyses of the Armenian state discourse, the discourses of the major new-generation diaspora organizations in the U.S. and the discourses of the young Armenians, mostly U.S citizens, who undertake volunteer work, internships, and ‘homeland tourism’ programmes in Armenia organized by those organizations.

The book was first published in December 2014. The second edition of this book was launched in August 2015.

Those who wish to purchase this book may contact AVİM.