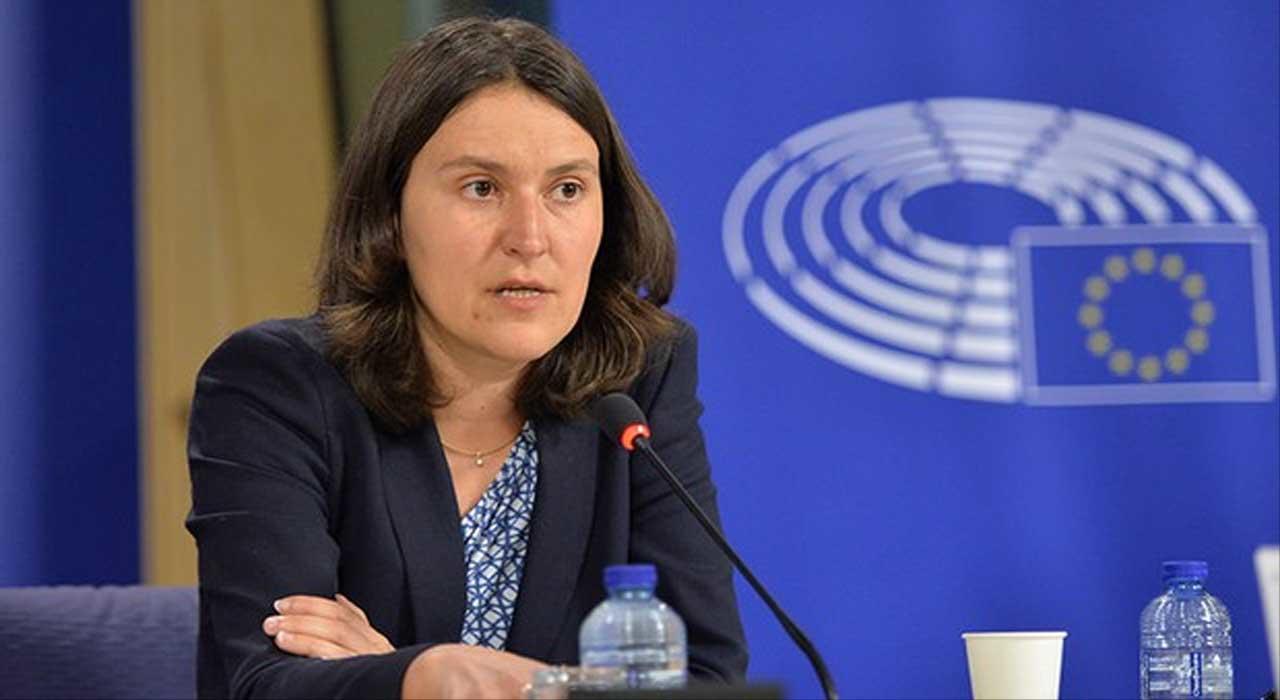 Kati Piri is a member of the European Parliament (EP) for the Netherlands within the Progressive Alliance of Socialists and Democrats political group in the Parliament. She has served as the Parliament’s Turkey rapporteur since 2014. According to the Dutch Parliament’s website, she was elected to the EP from the Labor Party list. She previously worked for the Social-Democratic Group in the European Parliament and for the Wiardi Beckman Foundation, a think tank linked to the Labor Party. In 2011, she became program manager for South Caucasus and Moldova at Netherlands Institute for Multiparty Democracy (NIMD, a Dutch institute that supports political parties and democratic movements in young democracies.[1] She is generally known for her very critical views on Turkey.[2] Under the pretext of criticizing the Turkish government, she has often demonstrated a biased stance against Turkey and Turkish people.

An interview with Kate Piri was published recently in the Brussels based Platform for Peace and Justice (PPJ) website.[3] PPC introduces itself as “a platform that monitors and reports the developments in the fields of peace, justice, democracy, the rule of law and human rights, with a special focus on Turkey” and declares that it “is an initiative of a group of dedicated scholars, lawyers, journalists and civil society activists.”[4]

Among the questions posed to Kati Piri is a question about the reference made in the latest EP resolution on the Armenian allegations regarding the 1915 events. After spelling out that she visited Mardin and spoke with the Armenian community there, Kati Piri stated the following: “so that is reflected in the report. I know that for many Christian Democrat politicians, this is a key issue. And so is the way in which Turkey leads with religious minorities.” When the interviewer makes a comment as “And the Armenian genocide, I guess…”, Piri made the following explanation:

“Yes, but, to be honest, I do not think that that should be part of the accession talks. And it is not. Actually, we didn’t mention it in the report, except for a reference to the parliament’s position. It is only in the ‘having regards’ part, not in the text of the report. Since I was appointed rapporteur, this is the way we deal with it. In the latest report, there is no reference to it, not because the EP does not have a clear position, but because we think it should not be written in the Turkey report which deals with accession.”

“Believes that the refusal by the present Turkish Government to acknowledge the genocide against the Armenian people committed by the Young Turk government, its reluctance to apply the principles of international law to its differences of opinion with Greece, the maintenance of Turkish occupation forces in Cyprus and the denial of the existence of the Kurdish question, together with the lack of true parliamentary democracy and the failure to respect individual and collective freedoms, in particular freedom of religion, in that country are insurmountable obstacles to consideration of the possibility of Turkey's accession to the Community…"

In the above mentioned AVİM analysis, the 2003 verdict of The European Court of Justice regarding the 1987 resolution of the EP was explained in detail. The verdict states that “the 1987 resolution is a document containing declarations of a purely political nature, which may be amended by the Parliament at any time. It cannot therefore have binding legal consequences for its author nor, a fortiori, for the other defendant institutions.”

In the light of this verdict, as Kati Piri honestly stated in the said interview, this issue is and cannot be a “be part of the accession talks”. This point should be honestly and openly reminded to the proponents of the Armenian narrative as well as to the people who habitually bring this issue to the fore.

In this respect, it would be much more honest not to mention the events of 1915 in the EP resolutions in a biased and antagonistic manner. This attitude does not serve any purpose other than causing disillusionment amongst Turkish people and thus distancing them more from the EU. As far as Turkey and Turkish people are concerned, it should be understood by the EU that it is not possible to change historical facts with political decisions.

When the interviewer posed the question of “In January 2018, you told Turkish newspaper Hürriyet that the EU has made some serious mistakes in its policy on Turkey. Would you like to give some examples?”, Piri give the following surprising answer:

“I think the moment that we allowed Cyprus in without having a solution to the Cyprus problem is the moment we gave up with the unanimity rule of ever finding a good policy on Turkey. If you have a member state which can and will always block certain strategies with Turkey… I think that is a big mistake.

The biggest leverage for finding a solution on Cyprus was EU membership, and we gave it away without even having a solution there.”

This answer is an honest assessment that can unfortunately be rarely heard from a member of the EP who is responsible for preparing reports on Turkey. Piri will probably be criticized for these words, but we hope that she will stand behind her words.

The Greek Cypriot Administration of Southern Cyprus in 1990 lodged an application to become a full member of the then European Community, now the European Union. The EU Council of Ministers accepted the Greek Cypriot application in 1995 and decided to start accession negotiations six months after the conclusion of the EU Intergovernmental Conference.

Turkey and the Turkish Cypriot side have objected to this process on the ground that the Greek Cypriot Administration had no legitimate authority to make such an application on behalf of the whole of Cyprus and that in accordance with the 1959 London and Zurich Agreements and the Treaty of Guarantee of 1960, Cyprus could not apply to join, or having applied, to join the EU whilst Turkey is not a member. Turkey also drew the attention to the point that “the opening of accession negotiations between the EU and the Greek Cypriot Administration, as set forth in the Resolution of 6 March 1995 of the EU Council of Ministers, will be a step in changing the parameters already agreed upon by both sides in Cyprus for a comprehensive settlement.”[6]

In this regard, the prominent Professor of International Law H. Mendelson Q.C. prepared a comprehensive opinion on the legal aspects of the one-sided membership application of the Greek Cypriot Administration of Southern Cyprus to the EU. This legal opinion of Professor Mendelson was published as a UN General Assembly and a Security Council document.[7]

According to Professor Mendelson, “Greek Cypriot Administration's application to join the EU is a breach of the relevant provision of the 1960 Treaty of Guarantee which stipulates that ‘Cyprus’ cannot participate, in whole or in part, in any political or economic union with any State whatsoever, in which both Turkey and Greece are not members. Such application constitutes a breach of the Treaty of Guarantee, as well as the legal and political state of affairs established by the 1960 Agreements and the international commitments contained in them.”[8]

What has happened in the Cyprus question after so many years?

As mentioned above, Kati Piri gives a relevant answer to this question: “The biggest leverage for finding a solution on Cyprus was EU membership, and we gave it away without even having a solution there.”

The Greek Cypriot Administration of Southern Cyprus has been member of the EU since 2004. Since then, it is not possible to say that there have been improvements in the stability in the Eastern Mediterranean region. This region, which is of great importance for the EU, is subject to continuous potential instability and is characterized more by conflicts than by cohesion. Continuous Greek Cypriot efforts for building coalitions against Turkey drag the region into greater danger day by day.

Nor can it be said that Greek Cypriot politicians and public have engaged in proper introspection as to the root causes of the island of Cyprus being de facto divided between two sides for decades now. The accession of the Greek Cypriot Administration of Southern Cyprus as “Cyprus” into the EU was a reward that simply reinforced the indifferent and irresponsible attitude of the Greek Cypriot side. This unearned reward allowed the Greek Cypriot side to conveniently forget how the Turkish Cypriot side was being subjected to systemic victimization, marginalization, and mass violence until Turkey was forced to militarily intervene in Cyprus in 1974 based on its rights as a guarantor state under the 1960 Treaty of Guarantee.

In the meantime, after the Brexit, the EU is preparing itself to become a neighbor of the United Kingdom also in the island of Cyprus because of the British Akrotiri and Dhekelia military bases. Meanwhile, Turkey's guarantor status on the island continues on the basis of 1960 Treaty of Guarantee that bans “Cyprus” from participating in any political union or economic union with any other state whatsoever.

For years, it has not been possible to bring stability to the region. There is no doubt that the EU has a significant historical responsibility for such an outcome.

[3] José Miguel Rocha, “Kati Piri: ‘Our Red Line on Turkey Has Been Crossed, and That Is How We Have Ended up with Our Position Today ,’” Platform Peace & Justice, March 12, 2019, sec. Brussels Talks, http://www.platformpj.org/kati-piri-our-red-line-on-turkey-has-been-crossed-and-that-is-how-we-have-ended-up-with-our-position-today/.

[6] “Circular Note Sent To The Embassies Of The EU Member States Concerning The Greek Cypriot Application To The EU, 30 June 1997” (Republic of Turkey Ministry of Foreign Affairs, June 30, 1997), http://www.mfa.gov.tr/circular-note-sent-to-the-embassies-of-the-eu-member-states-concerning-the-greek-cypriot-application-to-the-eu_-30-june-1997.en.mfa.

[8] “British Professor of International Law Prof. H. Mendelson Q.C.’s Opinion on the Legal Aspects of the One-Sided Membership Application of the Greek Cypriot Administration of Southern Cyprus to the European Union” (Republic of Turkey Ministry of Foreign Afairs, n.d.), http://www.mfa.gov.tr/british-professor-of-international-law-prof_-h_-mendelson-q_c__s-opinion-on-the-legal-aspects-of-the-one-sided-membership.en.mfa.