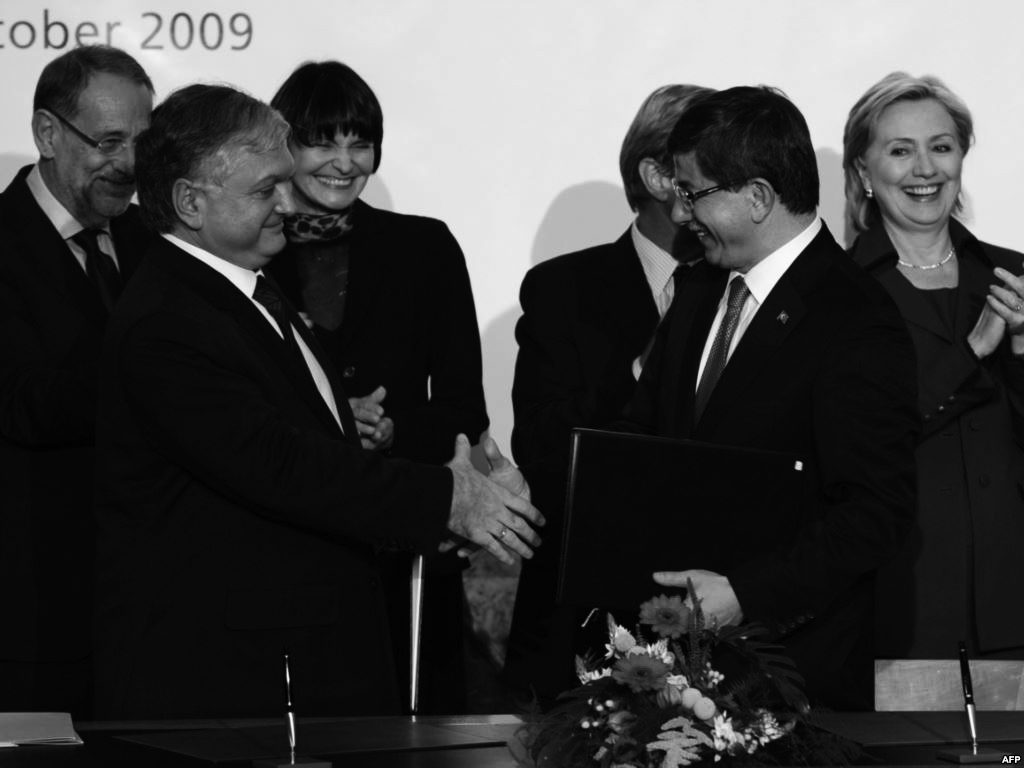 The year 2009 witnessed a promising and hopeful development concerning the bilateral relations between Armenia and Turkey, and Zurich Protocols were signed. The protocols had created a positive climate in the Turkish press and public and were prepared as a result of negotiations between Turkey and Armenia with the participation of the US, France Russia and through the intermediacy of Switzerland. In a manner rarely witnessed on diplomatic practices, on October 10, a ceremony was held with the involvement of the Foreign Ministers of the intermediary states, whereby Armenian FM, Edward Nalbandian and Turkey’s former FM, Ahmet Davutoğlu signed the protocols. However, on March 1 2018, about eight years after their signing, the Protocols, which presented an opportunity for establishing diplomatic relations and normalization of bilateral relations between two states, were unilaterally declared null and void by Armenia.[1]

Zurich Protocols were an essential step forward to reach reconciliation on the historical issues between Turkey and Armenia. The First Protocol, by referring to the UN Charter, Helsinki Final Act and Treaty of Paris, seeks to bring the two parties together on a peaceful basis.[2] In that context, the principles of equality, sovereignty, non-intervention, territorial integrity, and inviolability of national borders had been accepted by both sides. Another purpose of the protocols was to launch an initiative to open the borders between two counties with the recognition of their existing borders. The relations would be normalized and borders would be opened by taking these principles into consideration.[3] On the other hand, the Second Protocol agreed to establish an inter-governmental bilateral commission that would have subcommittees. One of those subcommittees was to be concerned with the historical issues and this constituted one of the most fundamental causes for the negative reactions among the Armenian community and the diaspora against the Protocols.[4] In this context the following passage was quite relevant:

“the establishment of a commission which experts shall take part  (…)to implement a dialog with the aim to restore mutual confidence between the two nations, to define existing problems and formulate recommendations including an impartial scientific examination of the historical records and archives” [5]

This passage was interpreted by the Armenian diaspora as an agreement to discuss genocide allegations in a historical subcommittee. During the political consultations conducted prior to the signing of protocols, representatives of the Armenian diaspora strongly criticized Armenian government for opening “the fact of genocide” to discussion because of the above paragraph. [6]

Another serious indication of the pressure on the Armenian government by the Armenian diaspora and opposition was the last minute crisis which took place before the signing ceremony on October 10. Armenian government had tried to show diaspora that there were no compromises on Nagorno-Karabakh or 1915 events. [7] This is why the Armenian delegation raised objections to the text of Davutoğlu’s speech, complaining that it referred to the Nagorno-Karabakh conflict. In response to these objections, Davutoğlu and his delegation opened Nalbandyan’s text to discussion and pointed out that Nalbandyan was referring to historical events. [8] The tension started during the signature ceremony was temporarily resolved with the decision that neither side would make a speech during the ceremony. [9]

Just after the ceremony, Serj Sarkissian the president of Armenian Republic published a statement and declared Armenia’s official position on the protocols. In the statement, it was pointed out that establishing a historical committee to discuss the 1915 events was out of the question and since the Nagorno-Karabakh conflict was not mentioned in the protocols, it could not be a precondition for the implementation of the protocols.[10] That statement, made soon after the crisis at the ceremony, cast further doubt on the implementation of the protocols since Turkey’s point of view was significantly different from that of Armenia on this particular issue. From the beginning, both sides had been interpreting passages in the protocols differently. Turkey had focused on the Nagorno Karabakh issue by referring to a passage in the second protocol which guaranteed “to resolve regional and international conflicts and controversies according to principles of international law.”[11]   For this reason, even though it is not directly mentioned in the protocols, the Nagorno-Karabakh issue as a regional conflict was seen as part of the protocols because of its effect on the bilateral relations of Armenia-Azerbaijan, Turkey-Armenia, and Turkey-Azerbaijan.

Following the publication of his statement, Sarkissian, who already showed his unwillingness to attract the anger of the diaspora, sent the protocols to Armenia’s constitutional court and wanted to get an approval that the protocols were in compliance with the constitution. This period was used for stalling the process and gaining time; and in the meantime Turkey’s reaction was expected. The Constitutional Court in its decision on January 12th, 2010, stated that the protocols did not violate the constitution.[12] The decision was interpreted as shameful by Armenian diaspora and its citizens.[13] The detailed ruling, published on January 18th, revealed the unwillingness of the court to face the opposition of the diaspora. The ambiguous and open-ended articles contained in the protocols were defined in a restrictive way in accordance with the Armenian views and included some expressions which was impossible for Turkey to accept. According to the decision, the entries of the protocols could not be interpreted as violating the Armenian Constitution. “Article 11 of the Armenian Declaration of Independence declares that ‘The Republic of Armenia stands in support of the task of achieving international recognition of the 1915 Genocide in Ottoman Turkey and Western Armenia’”, the Court stated. [14] For this reason, the court expressed the ruling that the historical subcommittee mentioned in the Second Protocol does not have an authority to discuss the events of 1915. The detailed ruling was interpreted as contradicting the letter and the spirit of the protocols by the Turkish Ministry of Foreign Affairs.[15] An effort to introduce changes on the content of the protocols through the Constitutional Court was against the most basic international norms and even more contradictory to the principle of good faith, which constitutes the basis for international law.

One month after the decision by the constitutional court, a new legislation in Armenia granted  authorization to the Armenian Presidency to abrogate international treaties. [16] After passing this new legislation, the Armenian administration increased its warnings to Turkey that the Protocols could be canceled. The belief that the protocols could be implemented has left its place to the increasingly hardened dialogue between the two countries.

Turkey raised several objections toward Armenia's attitude since the beginning of this process. The necessity of taking a stand against the uncompromising attitude of Armenia was relayed to the US, Russia, and EU, the attending states at the signing ceremony. However, despite these warnings, it was observed that Armenia didn’t change its position.[17] The Protocols, which were already made a political issue for domestic consumption, were withdrawn from the parliament before the constitutional referendum on 2015 by Sarkissian.[18] Armenia attempted to bolsters support for the government among the diaspora, the opposition, and the public via its policies vis-à-vis Turkey.

Finally, at the 72nd session of United Nation General Assembly in September in 2017, Sarkissian stated that the Protocols could not remain as hostages in the drawer of Ankara forever. Sarkissian further stated that they were ready to enter the spring of 2018 without the protocols, and he declared them null and void on March 1, 2018. In this manner, the protocols, which could not make any progress since 2009, were cancelled by Armenia. No official statement was made by Turkey and the protocols are still waiting at the subcommittee under the Turkish Parliament, which indicates that there are no changes in Turkey’s position.

The whole process shows that Armenia prefers to formulate its policy over the protocols in order to obtain support from the diaspora and the public opinion inside Armenia. The Armenian diaspora, where radical and fanatical views are occasionally expressed, had not supported the normalization of the relations with Turkey from the very beginning. Yerevan administration does not want to attract the diaspora’s anger. At the same time it also does not want to get a negative reaction from the international community. For this reason, the Armenian administration redefined the Protocols via the decision of Constitutional Court in a way which Turkey could never accept. In this manner, they tried to create the impression that Turkey alone was responsible for the failure of the process. Turkey’s official standing on Nagorno-Karabakh conflict is depicted to the international community as a justification. Until its withdrawal from the Armenian parliament in March 2018, the Armenian side repeatedly threatened to abolish the protocols and declared that if Turkey takes a step back from its stand, then Armenia would be ready to implement the protocols. At this point, it might be asked why the protocols were abolished at this time. Domestic considerations are again the primary concern for this move. One of the reasons behind this can be attributed to the upcoming parliamentary elections in Armenia where the ruling system has changed from executive presidency to the parliamentary government. With this move, Sarkissian will be gaining a major advantage in the parliamentary elections, particularly by obtaining the support of the Dashnaksutyun party, which from the very beginning was against the Zurich Protocols.[19] However, it is also not a convenient position for Armenia to portray itself before the international community as an uncompromising country acting in a populist fashion so as to gain a measure of success at domestic politics. At this point, Armenia’s choice of time becomes more meaningful since Turkey is undergoing a troublesome period in the international arena and currently experience tensions with the signatory countries who participated in the Zurich negotiations. Armenia might have interpreted this as an opportune moment to face less pressure on the part of the international community in reaction its cancellation of the protocols. The question of how Armenia’s relations with Turkey will be shaped in the future will rest on Armenia’s ability and willingness to distinguish domestic and foreign policy principles from each other. More importantly it will also depend on Armenia’s ability to resist the pressures of the third parties and focus on Armenia’s own interests by separating its goals from those of others.