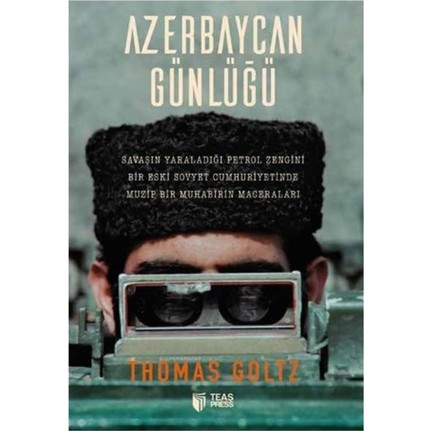 The book “Azerbaijan Diary: A Rogue Reporter's Adventures in an Oil-rich, War-torn, Post-Soviet Republic” written by Thomas Goltz was first published in 1998. The Turkish translation of this book has been published in March, 2018 by TEAS press. Thomas Goltz’s book is considered as one of the masterpieces related to the contemporary history of Azerbaijan.

In this book Goltz depicts the turning points of modern Azerbaijan by witnessing historical developments happening between the years 1991-1994. Considering that state-building, identity-formation of the nation and other factors influencing the current stance of Azerbaijan Republic have gone through crucial transformations, these years have great importance for the history of Azerbaijan. Thomas Goltz as an outside observer entered the political environment, witnessed bloodshed in Karabakh war, interacted with the people from different societal strata and tried to bring all these observations into the attention of the international community. The internal and external challenges standing in front of the newly independent state after regaining its freedom from decades-long Soviet regime, and the efforts of this new Republic to stand up and reconstruct itself are depicted in this book.

The book starting from Mutallibov regime, encompasses the rise and fall of the democratically elected government led by the People’s Front, the fear of the outburst of the “Civil War”, the blindness and ignorance of the international society to the miseries and challenges of Azerbaijani people during Karabakh war and later developments as the result of oil revenues. The personal contacts of the author with the important political figures of Azerbaijan, IDPs and refugees, families of the victims enhances the allurement of the book. Goltz’s knowledge of fluent Turkish, some Azerbaijani and Russian languages facilitated his communication with the local population enabling the readers to read the first-hand stories.

Goltz’s story of Azerbaijan started with a spontaneous plan to stay solely two weeks in Baku as a transitory city on the way to Tashkent. These two weeks turned into four years.

Goltz expressed his first amazement about Azerbaijan at the dawn of the collapse of the USSR.  After his visit to Uzbekistan the author comparatively depicted the reaction of other Central Asian Turkic countries and Azerbaijan to the concept of independency. When 30 August coup de’etat was realized in Moscow, Goltz was in Uzbekistan and observed how the old Communist government of Islam Kerimov continued to maintain his power while “Uzbeks were in deep sleep as a nation[1]”. Nevertheless the curiosity whether the situation is the same in Azerbaijan or not brought him back to Baku where history started to be written “in front of his eyes[2]”. The sparkles of revolutionary feelings of Azerbaijani people were sensed by the author when he got acquainted with the “awakened” nation gasping for the termination of the Russian hegemony.

Goltz later touches a very important issue directly pertainıng to the identity issue of Azerbaijani people. The adoration and respect to Turkey’s Turks was one side of this case. The author described his amazement for the reactions of Azerbaijanis in Baku and Nakhcivan when he presented himself as “Turkish with an American passport”. By offering all means of hospitability, Azerbaijani people embraced Goltz and his wife as “locals”.

On the other side of the coin there was anxiety about the substitution of one “Big Brother” with the other one in the face of Turkey that seemed unacceptable to many. Some people tried to search for rescue in the religion that increased popularity of Iran among the conservative Shiite societies of Azerbaijan. This religious upheaval has been described by Goltz in his visit to Mashtagha and Nardaran, the most religious settlements of Baku. On the other hand, there was still some proponents of Russian dominance in Azerbaijan as Ayaz Mutallibov’s government, or neo-communists sitting in the Parliament labelled by Goltz as old crocodiles[3].

Goltz from historical and sociological perspective researched the situation emerging in Azerbaijan by emphasizing the complexities engendered from the geographical position of this country. By reflecting historical background of miseries of a small country in such a complicated region Goltz could smoothly connect historical repercussions to the reality of Azerbaijan in the early 1990s.

These complications reached their culmination when the tensions around Karabakh escalated. The largest part of the book is devoted to this hard period of the young Republic. As the first foreign journalist accredited in Azerbaijan, Thomas Goltz in this book touched upon difficulties of Azerbaijani side to be heard in the international community.

This problem became more actual especially after the massacre realized by Armenian and Russian military forces in Khojaly, on the 26th February, 1992. Goltz recalls Khojaly crimes with utmost grievance. Hundreds of people, scores of families were demolished from the surface of the Earth overnight. Another frightening issue for Goltz was the ignorance and prejudiced approach of the international media organs that he wanted to deliver the information about Khojaly.

There were several obstacles impeding transmission of realities about Azerbaijan to the world that was underlined in Goltz’s book. The first factor was powerful and wealthy Armenian Diaspora. Secondly, the most worrisome fact was the weakness of Azerbaijan’s news agencies and communications machine. Goltz mentioned two facts in order to substantiate his point. On the one hand, realities during Mutallibov regime were hidden even from Azerbaijani citizens deceiving them by fake news in order to escape from the public upheavals. Not surprisingly, when Goltz came back from Karabakh to the capital he was shocked about the disinterested attitude of residents. Because of the misinformation it seemed like one side is suffering while others live on...

That’s why the presentation of the realities of Khojaly genocide in Azerbaijan Parliament was one of the most dramatic scenes of the book. It stroke the hardest blow to Mutallibov regime that ended up with the anger of Azerbaijani people and the former’s obliged withdrawal from power.

Another challenge impeding Azerbaijani realities to reach the world was unsuccessful attempts of Muttalibov government to enter the information war. This entrance was so feeble and unprofessional that Goltz was shocked when he saw booklets about Khojaly in the Armenian Ministry of Foreign Affairs. Armenians by translating the text and using the photos of killed Azerbaijanis in their narrative, provided manufactured information to the world. It was an indicator of both the weakness of Azerbaijan propaganda machine and the hypocrisy of the Armenian side.

Mutallibov government’s inefficient work increased the reputation of the “shadow government” led by the People’s Front, the group known with the appeals for democratic and independent Republic. This “shadow government was breathtaking for the deaf, mute and blind society[4]”. Goltz’s participation in the regular Friday riots of People’s Front fascinated him with arising hopes about the future of Azerbaijan Republic. People in the Square of Freedom were ready to follow this group consisting of political figures with various interests and intentions consequently damaging the unity.

The conditions matured for the first democratic elections in independent Azerbaijan. Goltz himself participated in the elections as an observer. This section of Goltz’s book is important in order to understand the mindset of Azerbaijan society. People’s Front’s candidate, the liberal democrat, patriotic leader of millions from the early days of the revolution Abulfaz Elchibey who also had the personal sympathy of the author was the first candidate. His rival was the man who appeared on the political platform very recently with the promises on cheap butter, bread or exaggerated luxury life. Goltz was astonished while seeing the rising popularity of Nazim Suleymanov among the Azerbaijani people. Despite the latter’s efforts to shadow the free and transparent elections, elections ended up with Elchibey’s victory. However, Goltz also sensed that there is a bigger plan behind. Here we can see how the author could sense the fragile political games influencing the fate of Azerbaijan in a very near future.

The hopes appearing as a consequence of democratic elections faded away very soon. Loss of territories one after another led Azerbaijani nation to disappointment. Betrayals in the government and army concluded up with the departure of the democratically elected President Elchibey from power. In regard with the following events Thomas Goltz used one of the powerful sentences in this book: “these people do not need any enemy, they were enough for themselves[5].” Maybe such kind of intervention to democracy was one of the indicators to sparkle the idea in the author’s mind to title the first edition of the book as “requiem for a would-be Republic[6]”.

Goltz’s observations of developments in Baku after his return to Azerbaijan in 1998 triggered him to change the title.

The early 1990s is the mirror of various features of Azerbaijan society, and Goltz’s book turned into the reflection of this mirror. Ugly and beautiful traits of Azerbaijan society in the early 1990s, various sides of political competition, greediness and betrayal of some political figures, and loyal devotion of others, crimes of Armenians during Karabakh war neglected in the international society are courageously presented in this book. Such kind of successful reflection may help people who are interested in Azerbaijan to learn about the past of the country in its evolution to the present and may provide a base for future researches.

[6] Requiem For A Would-Be Republic; The Rise And Demise Of The Former Soviet Republic Of Azerbaijan