CHAPTER BY CHAPTER SYNOPSIS AND REVIEW OF TURKS AND ARMENIANS: NATIONALISM AND CONFLICT IN THE OTTOMAN EMPIRE BY JUSTIN MCCARTHY - 1
Analysis No : 2015 / 18
Author : Ekin GÜNAYSU
22.10.2015
5 min read 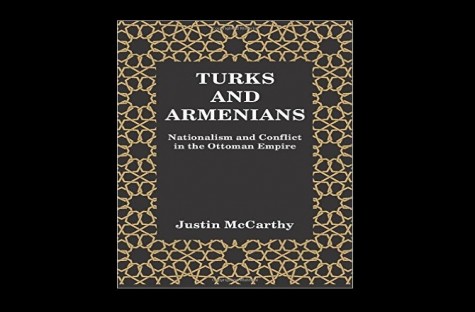 Introduction and Chapter One

In the introductory pages and the first chapter of Turks and Armenians: Nationalism and Conflict in the Ottoman Empire, Prof. Justin McCarthy makes a strong argument by stating that the widely accepted belief that the Turks are guilty of one-sided massacre of Armenians is a result of a traditional prejudice against Turks based on religious and ethnic racism. One of Prof. McCarthy’s biggest success in this section of the book is the fact that he immediately captures the reader’s attention by making his arguments more concrete with the racist quotations from an article published in 1827 in Blackwood’s magazine in Britain and with his reference to August Keane who claims that Turks are “‘dull, reserved, somewhat sullen and apathetic, nearly all brave, warlike, even fierce, and capable of great atrocities’”. By pointing out to these two sources, he not only underlines the fact that the racist portrayal of Turkish people was embraced by the intellectual and educated section of the Western society as well as the general public, but also effectively demonstrates the scope of the bias against Turks. It is also important to note that the prejudice against Turks continued well into the 20th century; the CASR/NER publications in 1916 used statements such as “bloodthirsty Turks,” and “Ottoman hordes” during the WWI.

In the introduction of the book, Prof. McCarthy makes three important points which, on the one hand, prepare a solid ground for his arguments presented in the following chapters, and, on the other hand, introduce the content of the book to his readers. First and foremost, by noting that Islam was seen as the traditional enemy of Christianity, he affirms that the prejudice against Turks had a religious dimension. Second, he elaborates on how the Caucasian race was deemed superior to the “yellow race”, which was associated with Turks, setting the basis for racial discrimination. Last but not least, he touches on how this propaganda was used by the politicians and missionaries to further their own practical ends.

Prof. McCarthy’s clear and straight forward language engages the reader from the first pages of the book. Though his arguments might be new to many readers in the West, given the fact that the commonly accepted version of the relations between Turks and Armenians is quite different than the facts presented in this book, the logic and the scientific approach behind his work not only disproves the “Myth of the Terrible Turks” but also deserves credit, for his objective accounts of the history of Anatolia.

Prof. McCarthy begins his first chapter, on Eastern Anatolia and the Southern Caucasus, by stating that “the thinkers who spent time on such questions speculated that the Garden of Eden must have been in the valley of the Tigris and Euphrates river”, as a reference the beauty of the region. First few paragraphs of the chapter give an overview of the region’s geographic features, such as its climate and topography. In fact, Prof. McCarthy makes comparisons between the temperatures of the eastern and southern cities of Anatolia with that of American cities, thus effectively making the content specifically interesting for American readers.

After highlighting the obstacles posed by the physical geographical barriers of the region, he continues with giving important demographic information on the Turkish, Kurdish and Armenian populations. He attaches particular importance to the distribution of the Armenian population in Bursa (5%), Ankara (9%), Izmit (18%) and Istanbul (9%) and emphasizes the fact that “the Armenian populations in western Anatolia and Europe were quite different than those in eastern and central Anatolia” under the Ottoman rule.  It is also important to note that he presents the relevant data in a clear and organized manner by providing four detailed tables on the climate, the population distribution by religion and the demographic picture of Eastern Anatolia, Cilicia and the Russian Southern Caucuses.

Following his analysis on demographics, he focuses on education and reaches a clear conclusion that “nowhere was the superior situation of the Armenians more evident than in education”, basing his argument on a number of striking statistical facts. Here, we learn that “in 1901 there were only 201 Muslims in secondary schools” whereas the number of Armenian students attending Armenian private schools was as high as 1,070 and 390 in those operated by American missionaries. Gregorian, Catholic and Protestant communities had their own schools funded by American religious congregations. While the Armenians could afford to pay for their education in American missionary schools, supported by donations from the United States, “the impoverished government could not match the foreign and Armenian educational expenditure”. Due to these imbalances in education caused by the unequal financial resources, he argues, the Armenian populace “was better educated and more able to cope with the modern world”.

In the final section of this chapter, Prof. McCarthy takes a critical look at the relationship between the Armenians and the Ottoman State, and he underlines Armenians’ ability to interact with the European merchants due to their familiarity with the European finance industry and their language skills, which enabled them to become “intermediaries between European merchants and the government and the Ottoman market”. He also draws attention to the fact that Armenians became high officials in the government such as the ministers of Foreign Affairs, Treasury and Finance during the final decades of the Empire.