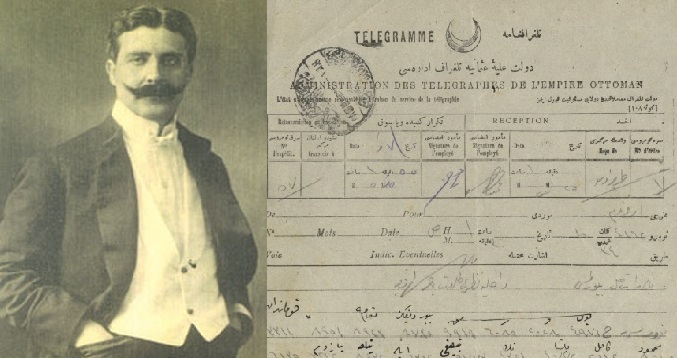 A flurry of media interest surrounded Clark University professor Taner Akçam’s recent claims that he had unearthed previously unseen, irrefutable evidence that would finally establish that the relocation of Ottoman Armenians in 1915 constituted an organized, systematic genocide. Akçam was quoted in a New York Times article on April 22, 2017 as stating that his findings constituted an “earthquake,” further claiming that it would remove the “last brick in the denialist wall.”

Akçam’s findings were in the form of documents which he claims were shipped from Turkey to England in 1922. From England, the documents were allegedly taken to France and from there onwards to Jerusalem.[1] While the original documents are reportedly stored at the Armenian Patriarchate in Jerusalem, the restriction of access to researchers has meant that the documents hitherto have not been authenticated. Akçam claims that he discovered a “photographic record of the Jerusalem archive in New York.”[2]

The importance of the documents, Akçam posits, is that the cipher keys used are in tandem with those of other Ottoman archival documents of the period, therefore the authenticity of documents which appear to show official involvement in the destruction of Ottoman Armenians can no longer be denied.[3] The main document Akçam has brought to attention is the text of an alleged telegram sent by Bahaeddin Şakir, a leading operative of the Ottoman Special Organization (Teşkilat-ı Mahsusa) during World War One, to the regional governor of the Mamuret-ul Aziz district. According to Akçam, this telegram shows Şakir enquiring as to whether the Armenians of the region were simply being relocated to other provinces, or whether they are being killed outright.

1 – Contrary to the claims that the telegram in question has been uncovered for the first time, this alleged telegram was submitted to the tribunals established to try the war time leaders of the Ottoman Empire,[4] and was subsequently published in the Official Gazette (Takvim-i Vekayi). The telegram has also been utilized in various secondary works on the Armenian issue as early as the 1980s,[5] and was partly reproduced in a 2011 book co-authored by Akçam and his mentor Vahakn Dadrian.[6] Writing in the Agos weekly on April 26, 2017, Akçam further notes that the telegram was first published in facsimile form by Dadrian in 1994.

2 – The telegram in question has been dated April 21, 1915 in most secondary sources.[7] Akçam and Dadrian have dated the telegram as June 12, 1915,[8] other sources have recorded it as being sent on June 21, 1915.[9] These mistakes arise primarily from the respective researcher’s unfamiliarity with the calendars which were in use in the Ottoman Empire and the required methodology to convert dates to the Gregorian calendar. It is also indicative of the reproduction of these claims without the necessary scholarly scrutiny.

This is significant as the relocations of Armenians had not yet commenced by 21 April 1915 in general, and certainly not in the Mamuret-ul Aziz area about which Şakir is supposed to have sent the telegram requesting information. Raymond Kevorkian refers to the arrest of 40 to 50 Armenians "of the first rank" having occurred in the Mamuret-ul Aziz area from May to early June,[10] after the uncovering of arms and munitions belonging to Armenian revolutionary groups. Kevorkian further notes that the first convoy of Armenians to be relocated left the area on July 1, 1915.[11] Therefore, the dates hitherto presented in secondary sources are unlikely as the relocation of Armenians had not yet begun.

The date as of the telegram as provided in the tribunal verdict is recorded precisely as “21.4.31” in the Rumi calendar.[12] This date corresponds to July 4, 1915 in the Gregorian calendar.

3 – The telegram is signed in the name of ‘Bahaeddin Şakir, leader (reis) of the Special Organization.’ Similarly, the verdict of Şakir’s trial, referencing the aforementioned telegram, refers to Şakir as having held this title.[13] However, the title reis was also utilized by other leading members of the SO such as Rıza Bey during the same period.[14] The Turkish language lacks a corresponding expression for the definite article ‘the’ in English. Consequently, it is likely that Şakir was referring to himself as ‘a leader of the SO,’ as he never held the position of leader.[15]

Edward J. Erickson has stressed that the SO was administered by a committee and that Şakir and Rüşeni Bey were the responsible persons for the eastern provinces of the Ottoman Empire.[16] Relying exclusively on parts of the tribunal documents, Akçam and others have developed a thesis that there existed a ‘two track system’ within the SO,[17] and that Şakir headed the department established with the purpose of eliminating the Armenians of eastern Anatolia.[18] Erickson, however, has noted that hitherto no primary source evidence has been presented to establish these claims.[19]

Crucially, the most comprehensive study on the SO to date based on primary sources claims that Şakir had severed his ties with the SO by June 19, 1915.[20] If accurate, the telegram could not possibly have been written by Şakir.

4 –Şakir addresses the recipient of the telegram as "kardeşim" (my brother). The use of colloquial speech in an official telegram is most unusual. The present author could not determine the use of colloquialisms in Şakir’s telegrams stored at the Ottoman archives.[21] The facsimile of the alleged telegram made public by Akçam is in fact the text of a message from Şakir to be sent as a telegram, but not a telegram proper. Furthermore, the use of headed paper belonging to the Ministry of Interior’s Inspectorate of Civil Affairs (Dâhiliye Nezâreti Umûr-ı Mülkiye Müfettişliği), to which Şakir was not attached, is left unexplained by Akçam other than his statement that it proves the document's authenticity. However, the extant telegrams of Şakir at the Ottoman archives are written on paper headed telegram Administration of the Imperial Ottoman State (Devlet-i Aliyye-i Osmaniyye Telgraf İdâresi). Furthermore, the document lacks the 'besmele' header which was standard for written documents in the Ottoman Empire.  Akçam’s claims regarding the authenticity of the ciphering keys used in the telegram appear to lend credence to the claim that the document is authentic. However, other documents widely regarded as forgeries also contain ciphering, therefore the alleged telegram of Şakir cannot be taken at face value.[22]

Lastly, it is noteworthy that the telegram begins by asking if Armenians are being “tasfiye,” (the term “tasfiye” has numerous definitions. In Ottoman Turkish its primary definition corresponded broadly to “cleaned,” whereas in modern Turkish its usage is more or less synonymous with expulsion from an organization), or are they being moved elsewhere (nefy ü tağrîb). In the subsequent sentence, Şakir asks whether “destruction” of “dangerous persons” (eşhâs-ı muzırra imhâ ediliyor mu) is ongoing, or if they are just being sent elsewhere.[23] The use of the two separate terms “tasfiye” and “imhâ” requires further investigation. It is questionable whether “tasfiye” is synonymous with the term “murder,” as has been suggested by Akçam. Correspondingly, the use of the word “destruction” is used specifically in relation to “dangerous persons” and not the Armenians referred to in the first sentence. It must be asked, if this document is authentic, why Şakir chose separate terms for the Armenians being relocated and others who he refers to as “dangerous persons.” It must also be asked why Akçam sought to conflate these two statements.

At the crux of this debate lies the dilemma as to whether the evidence used during the tribunals established to try the war time leaders of the Ottoman Empire can be taken at face value. Erickson argues that the tribunal was a “kangaroo court” established to “appease the British occupiers and to suppress the surviving rump CUP,” critically noting that “neither the actual evidence itself nor the trial transcripts exist today.[24]

The results of the verdicts were objected to in a report penned by Colonel Süleyman Şakir, a member of the Divan-i Harb-i Örfi which had tried Bahaeddin Şakir and other war time leaders. Colonel Süleyman Şakir specifically noted in his report that there was an absence of witnesses and intelligence (ihbâr) to corroborate the claims against Bahaeddin Şakir.[25] British civil servant W.S. Edmonds also commented that if Şakir returned to Turkey, he would be able to request a retrial and consequently, the sentencing meant very little.[26] It is also worth noting that a petition requesting clemency for the defendants was submitted to the court by Armenians from the Mamuret-ul Aziz area.

The lack of sufficient primary source material regarding Şakir, and the general lack of secondary material on both Şakir and the Teşkilat-ı Mahsusa has served to cloud discussions regarding the history of the organization and Şakir’s role within it. This issue has been complicated further by the unlikely theory of Dadrian and Akçam that the Teşkilat-ı Mahsusa and Şakir played a pivotal role in the alleged extermination of Armenians in 1915,[27] and also by the exposure as fraudulent documents alleged to have been penned by Şakir.[28] It is for these very reasons that the documents recently uncovered by Akçam must be subject to the utmost scrutiny and cannot be taken at face value. It is unfortunate that Akçam, by presenting these documents directly to the media, has sought to avoid scholarly scrutiny and instead presented the academic community with a fait accompli. Far from representing a “smoking gun,” the continual rehashing of old materials by Akçam has only served to further muddy the waters of an already hotly contested topic.[29]

[2] Akçam’s explanation for the origin of these documents shares similarities with the Andonian documents, which are universally accepted by researchers as forgeries, see Şinasi Orel and Süreyya Yuca, The Talât Pasha Telegrams: Historical fact or Armenian fiction? (Nicosia: K. Rustem and Brother, 1986), 19-23.

[7] Libaridian, “The Ideology of the Young Turk Movement,” ibid; John S. Kirakossian, The Armenian Genocide: The Young Turks Before the Judgement of History (Madison: Sphinx Press, 1992), 172.

[15] The heads of the Special Organization were Süleyman Askeri Bey, Halil Bey and Cevad Bey. For a list of the SO’s administrative committee and departmental heads, see Polat Safi, "The Ottoman Special Organization-Teşkilât-ı Mahsusa: A Historical Assessment With Particular Reference to Its Operations Against British Occupied Egypt (1914-1916)" (Master's Thesis, Bilkent University, 2006), 127-28.

[17] Taner Akçam, A Shameful Act: The Armenian Genocide and the Question of Turkish Responsibility (London: Constable, 2007), 93-95.

[18] It is worth noting that Şakir was instructed by the head of the Teşkilat-ı Mahsusa in a telegram dated October 2, 1914 that “…even if the Armenians are not working together with us (teşrik-i mesai), you must work to guarantee their neutrality and force those who are in a position of responsibility to be mindful of not causing distress to the Armenians unless absolutely necessary.” Tetik, Teşkilat-ı Mahsusa, 382.

[27] There is a lack of extant primary source material to corroborate Dadrian’s and Akçam’s claims regarding the role of the Teşkilat-ı Mahsusa. The current author could not uncover evidence at the Turkish military archives of the role specifically ascribed to Şakir by Akçam. Among the documents the present author consulted were the log books of the Teşkilat-ı Mahsusa for the Erzurum region.