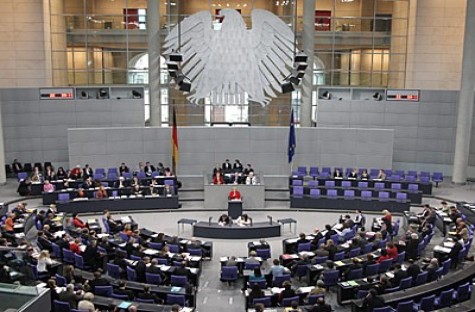 The losses of the Anatolian Armenian population during World War I is always a highly debated issue. It gained more global attention this year which marks the centennial of the 1915 events. In a total of 24 countries[1], including Russia, Greece and France, parliaments passed resolutions recognizing the 1915 events as genocide. Every year, when the issue of whether the 1915 events constitute genocide or not, is debated in the different parliaments, the same discussions are made. Germany, whose largest immigrant population has Turkish roots, claimed that it is the historians duty to reveal what really happened in 1915, and resisted to use the term ‘genocide’ until this year in order to keep good relations with Turkey, an important trading partner. Germany’s position change was received with astonishment and increased tension in Turkey.

In 2005, the German Bundestag passed a bill titled “Commemorating the expulsion and the massacre of the Armenians in 1915 – Germany must make her contribution to the reconciliation between Turks and Armenians” with the majority of the votes and urged Turkey to examine its role in the mass killings of Armenians in 1915. “The motion didn't mention Turkey's bid to join the EU, but said the Armenian issue was an example of how Turkey needs to guarantee freedom of speech - an area where Ankara has been told it must improve if it is to join the 25-nation bloc.”[2] The Resolution contained the word genocide, when mentioning the reasons for this motion, stating “Many independent historians, parliaments and international organizations describe the expulsion and annihilation of the Armenians as genocide.”[3] In the bill, the following can be read:

“The Bundestag may resolve:

The German Bundestag honors and commemorates the victims of violence, murder and expulsion among the Armenian people before and during the First World War. The Bundestag deplores the deeds of the Young Turkish government in the Ottoman Empire which have resulted in the almost total annihilation of the Armenians in Anatolia. It also deplores the inglorious role played by the German Reich which, in spite of a wealth of information on the organized expulsion and annihilation of Armenians, has made no attempt to intervene and stop these atrocities.

The German Bundestag honors and commemorates the efforts made both by Turks and Germans who, working under difficult circumstances and conditions and against the resistance of their respective governments, have committed themselves in word and deed to saving Armenian women, men and children (…) Due to its historic role in the Turkish-Armenian relations, Germany must assume a special responsibility as part of its neighborhood initiative of the EU. The aim must be to help normalize and improve the situation between Armenia and Turkey and so to help stabilize the Caucasus region.

- to help the Turks and Armenians to arrive at a settlement by remembering, reconciliation and forgiving historical guilt
- to ensure that Parliament, Government and society in Turkey deal without reservation with their role in relation to the Armenian people in the past and in the present
- to advocate the establishment of a commission of historians including Turkish, Armenian and international experts
- to ensure that not only the archives of the Ottoman Empire on this issue are made accessible to the general public, but also the copies of the German Foreign Office archives given by Germany to Turkey
- to insist on the actual organization of the conference scheduled in Istanbul but postponed under governmental pressure
- to press for freedom of opinion in Turkey, in particular with respect to the fate of the Armenians
- to help Turkey and Armenia to normalize their interstate relationships.”[4]

In 2012, more than 157.000 Germans voted online for the German government to pass a law which would make it illegal to deny that the mass killings of Armenians was genocide. This online poll was part of an initiative by Chancellor Angela Merkel called ‘Dialogue on Germany’s Future’, which was meant to bring the German government closer to the people and get their opinions about how to improve life in Germany. It took place between February and April 2012. However, Merkel later rejected the idea, on the basis that it would harm relations with Turkey, a key trade partner of Germany.[5]

Angela Merkel criticized Turkey’s continued denial of the Armenian Genocide in 2014, saying to then Turkish Prime Minister Erdoğan to “face its history”.[6] Nevertheless, the term genocide was not mentioned by the German government that year in the parliament.

In Bundestag, there have been many parliamentary questions, especially since 2010, for recognition of the mass Armenian killings as genocide by the Left Party (Die Linke). The German government clarified its position for each question with a written statement. For instance, the last parliamentary question from Die Linke, in January, 2015, had claimed that more than 1 million Armenian in the Ottoman Empire were killed systematically and asked for an official recognition of these events as genocide. The Bundestag had refused this call, repeating its response that “the question whether the 1915 events constituted genocide should be answered by historians and the issue should be solved between Turkey and Armenia.”[7]

However, on the 100th anniversary of the 1915 events after the recognition of the Armenian massacres by the Pope and the European Parliament as genocide, the same debate restarted in Germany. Although deputy government spokeswoman of Germany, Christaine Wirtz said on April 13 that “[The events of 1915 are] a question that the German federal government would not intervene in. It is a question that should be dealt with historians and experts”[8], Germany retreated from its position, announcing exactly one week after the Wirtz’s speech, on April 20, that the German Parliament is set to use the term genocide in a resolution. The major reversal of Germany’s position surprised Turkey and many other countries.

"The government backs the draft resolution (…) in which the fate of the Armenians during World War I serves as an example of the history of mass murders, ethnic cleansings, expulsions and, yes, the genocides during the 20th century,"[9] Seibert, the spokesman of Merkel said on April 20, 2015. Furthermore, on April 23, the German President Gauck labeled the 1915 killings as genocide, stating: "The fate of the Armenians stands as exemplary in the history of mass exterminations, ethnic cleansing, deportations and yes, genocide, which marked the 20th Century in such a terrible way." He also stressed the responsibility of Germany, which was ally of the Ottoman Empire at the World War I, mentioning that German soldiers "were also involved in the planning and, partly, in the execution of the expulsions".[10] The German Parliament initiated one day after the German president used the term genocide, the adoption of a resolution which labels the 1915 events as genocide. “The resolution debated (…) is a compromise between government and parliamentary negotiators that puts the genocide in the context of other mass killings and singles out the Holocaust as a singular event.”[11] It is also remarkable that the German Chancellor Merkel remained silent and did not intervene in any debate. A formal voting is planned to take place around summer 2015.

AUSTRIA AND THE REACTION OF TURKEY

Another ally of the Ottoman Empire at the World War I., Austria, acknowledged the 1915 events as genocide this year. In the statement made by Austrian parliament on April 22, it was mentioned that the deportation of Armenians ended in genocide. "It is our duty to acknowledge and condemn these terrible events as genocide because of our historical responsibility - the Austro-Hungarian monarchy was an ally of the Ottoman Empire in the first world war (…) It is also Turkey's duty to face honestly dark and painful chapters of its history" the statement read.[12]

The reaction of Turkey regarding the recognition of the 1915 events as genocide by Austria was to recall its ambassador. The Turkish Foreign Ministry said in a statement. "We reject this biased attitude of the Austrian parliament, trying to lecture others on history, which has no room in today's world. (…) It is clear that this declaration (...) will have permanent negative effects on Turkey-Austria relations."[13] The Turkish Foreign Ministry also has condemned Germany for using the word ‘genocide’, and warned of long term consequences. However, the bill was not yet put to vote and Turkey’s prospective reaction to Germany is yet to be seen.

The debates on 1915 events initiated another discussion on Germany’s recognition of the Herero massacres of 1904-1907 as genocide. There were already worries in Germany that what happened in Namibia in the beginning of the 20th century could be considered as genocide and could lead to reparation demands. Namibia, then known as South-West Africa, was a Germany colony from 1884 to 1915. In 1904, the Herero and Nama people rebelled against German colonial rule, killing 150 Germans. “The systematic extermination of around 80% of the Herero people and 50% of the Nama was the work both of German soldiers and colonial administrators; banal, desk-bound killers. The most reliable figures estimate 90,000 people were killed. In the case of the Herero, an official, written order – the extermination order – was issued by the German commander, explicitly condemning the entire people to annihilation.”[14] The event gained public knowledge in the country itself and was put in the political agenda after Namibia became independent in 1990. Many campaigners “submitted a petition to the Foreign Ministry at the end of March 2015 asking for an official apology, reparations for stolen land and expulsions, and to recognize the atrocities as genocide.”[15] In 2004, then-Development Minister of Germany Wieczorek-Zeul visited Namibia and asked for their “forgiveness” claiming: “the crimes that took place a hundred years ago would have been defined as genocide, and von Trotha would have been brought before a criminal tribunal.”[16] However, there is no official recognition of genocide from Berlin. The last motion in 2012 to recognize the murders as genocide which was submitted by the Social Democrats and the Greens was refused by the Bundestag.

Germany’s original position on the Armenian case was to leave the matter to historians and experts. It held this position until this year, coinciding with the 100th anniversary of the 1915 events. This change was unheralded for Turkey and many other countries. In relation to this change of opinion, the question of the 1904 Herero massacres in South West Africa – then a German colony – was raised by some political sectors in Germany. They are both considered by some to be the first genocide of the 20th century. The debates on the 1915 events in the Ottoman Empire and on the 1904 Herero massacres are still ongoing. It will be interesting to see how the results of these debates will affect Germany’s future decisions in relation to the legislation on historical events, and can define the future discussions between Germany and Turkey on the Armenian question.

[18] Kopp, Christian (30 March 2015): NGO alliance „No Amnesty on Genocide!“ handed over the Ovahereros’ online petition to the German Foreign Ministry in Berlin on March 27th 2015. Genocide-namibia.net.