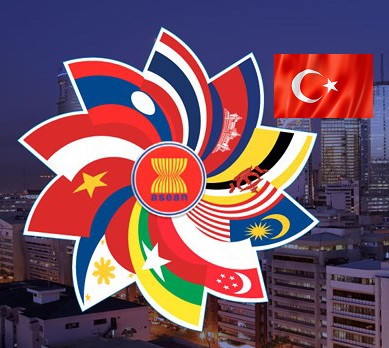 According to Turkish Ministry of Foreign Affairs (MFA) website, Turkey pays special attention to developing its relations with ASEAN. In this regard, Turkey was accored the status of Sectoral Dialogue Partner of ASEAN at the 50th ASEAN Foreign Ministers’ Meeting on 5 August 2017 in Manila”.[1]  The similar information is provided in the ASEAN website. Aforementioned ASEAN website states that “Turkey acceded to the Treaty of Amity and Cooperation in Southeast Asia (TAC) on 23 July 2010 in Ha Noi, Viet Nam. This reflects Turkey (’s) strong commitment to regional peace, stability and a contribution to the TAC as an important code of conduct governing inter-states relations. The Government of Turkey accredited its Ambassador to ASEAN since September 2011.”[2]

It further explains that “Following the conferment of the status of Sectoral Dialogue Partner of ASEAN by the 50th AMM (ASEAN Foreign Minister’s Meeting), ASEAN and Turkey convened the 1st ASEAN-Turkey Joint Sectoral Cooperation Committee (AT-JSCC) Meeting on 30 May 2018 at the ASEAN Secretariat to mark the launch of ASEAN-Turkey sectoral dialogue partnership. The Meeting adopted the Terms of Reference of ASEAN-Turkey Joint Sectoral Cooperation Committee (AT-JSCC) and agreed to develop a list of Practical Cooperation Areas (PCA) between ASEAN and Turkey, which would serve as a practical guide to further substantiate the Sectoral Dialogue Partnership with a focus on areas of mutual interests, guided by and aligned with the ASEAN Community Vision 2025.”

The first ASEAN-Turkey-Singapore (term president) Trilateral Meeting was held very recently in Singapore in the sidelines of the 51st ASEAN Foreign Minister’s Meeting and Related Meetings (30th July to 4th August) on 1 August 2018. Per Turkish MFA announcement at the meeting, common projects in the period ahead with ASEAN were discussed.[3]

Current ASEAN member states are Brunei Darussalam, Cambodia, Indonesia, Laos, Malaysia, Myanmar, the Philippines, Singapore, Thailand and Vietnam. According to sources competent on ASEAN studies “the foremost criterion is the paramountcy of geography. The prospective member must be geographically located in Southeast Asia.” It is stressed that “the 1967 ASEAN Declaration refers to this in welcoming ‘all States in the South East Asian region’ that subscribe to the aims and objectives of ASEAN. These were the only criteria for membership up to when Myanmar, Laos and Cambodia applied to join ASEAN.”[4]

In fact Article 6, paragraph 2 of the ASEAN Charter concerning the “admission of new members” states the following admission criteria: a) location in the recognized geographical region of Southeast Asia, b) recognition by all ASEAN member states, c) agreement to be bound and to abide by the ASEAN Charter, and c) ability and willingness to carry out the obligations of membership.[5]

ASEAN Partnership with Other Countries and Organizations

Article 41 of the ASEAN Charter sets for provisions for its external relations and directs the organization to develop friendly relations and mutually beneficial dialogue, cooperation and partnership with other countries and sub-regional, regional, international organizations and institutions. In this framework Article 44 of the Charter defines the formal status of external parties as Dialogue Partner, Sectoral Dialogue Partner, Development Partner, Special Observer and Guest. All these status are subject to the decision by ASEAN Foreign Ministers Meeting.

A table indicating the ASEAN’s external relations and the status of non-member countries and international organizations in this process is given below:[6]

ASEAN’s Dialogue Partners have established cooperation funds under each Dialogue to support joint projects. The Dialogue Partners also commit additional funding and technical support for specific ASEAN initiatives.  A moratorium on dialogue partner applications has been imposed since 1999. In number of press reports there are references that Timor-Leste was conferred observer status in ASEAN in 2011. However, it seems that “Timor-Leste, which put in its membership bid in 2011, is not an observer … and can only attend open sessions of ASEAN Summits and ministerial meetings as a Guest.”[7]

According to competent sources on the ASEAN, “Dialogue Partners are also considered its development partners since they have assisted ASEAN’s development trajectory. Regional organizations working with ASEAN on various aspects of economic and infrastructure development are given similar consideration. To date, only one country – Germany – has been accorded a separate Development Partner status. Sectoral partnerships are different from dialogue relations. The scope of interaction with ASEAN is limited to certain sectors where the partner’s contributions can support ASEAN’s community-building priorities.”[8]

Turkish MFA website states that “Turkey’s ultimate objective for developing its relations with ASEAN is to achieve Dialogue Partnership. However, since the moratorium is still in effect with no sign of lifting, Turkey has applied to become a Sectoral Dialogue Partner (SDP) with ASEAN in 2015 in order not to lose the momentum of relations”.[9]  It should be noted that Turkish Ambassador in Jakarta was accredited to ASEAN. Furthermore, Turkey at the beginning of 2018 opened a resident Embassy in Vientiane (Lao PDR) and now has resident Embassies in all the ten ASEAN member countries.

Turkey’s decision to establish institutional ties with ASEAN dates back to 1999. Taking the first step for institutional cooperation, Turkey as it was mentioned above, became a signatory of the ASEAN Treaty of Amity and Cooperation in Southeast Asia (TAC) on 23 July 2010 during the 43rd ASEAN Foreign Ministers’ Meeting held in Vietnam. Since then, as the above overview points out, Turkey has been trying to do its best for developing its relations with ASEAN. The first and foremost issue for Turkey in its relations with the ASEAN, from my perspective, should be to balance the trade volume as far possible. This requires a considerable effort to increase its exports to ASEAN countries. This must be a priority not only for the state organs but also the Turkish business community. There are a lot of things to be done in this field.

ASEAN has number of affiliated dialogue and consultation platforms. One is the ASEAN Regional Forum (ARF). ARF was formed at the Twenty-Sixth ASEAN Ministerial Meeting and Post Ministerial Conference, which were held in Singapore on 23-25 July 1993. The inaugural meeting of the ARF was held in Bangkok on 25 July 1994. The objectives of the ARF are defined as “to foster constructive dialogue and consultation on political and security issues of common interest and concern”, and “to make significant contributions to efforts towards confidence-building and preventive diplomacy in the Asia-Pacific region.[11]

The current participants in the ARF are as follows: Australia, Bangladesh, Brunei Darussalam, Cambodia, Canada, China, Democratic People's Republic of Korea, European Union, India, Indonesia, Japan, Lao PDR, Malaysia, Mongolia, Myanmar, New Zealand, Pakistan, Papua New Guinea, Philippines, Republic of Korea, Russia, Singapore, Sri Lanka, Thailand, Timor-Leste, United States, and Vietnam. As it can be seen from participant list, apart from the ten ASEAN member states, ARF has prominent non-ASEAN participating states, among others, like the US, Russia, China, India and Pakistan, EU is also a participant. It is stated in the ARF website that main criteria for the participation (which was said to be adopted in July 1996) are commitment, gradual expansion, relevance and consultations.  According to relevance criteria “A new participant should be admitted only if it can be demonstrated that it has an impact on the peace and security of the ‘geographical footprint’ of key ARF activities (i.e. Northeast and Southeast Asia as well as Oceania”.  For the period of January- December 2018 the Chairman and Vice-Chairman of the ARF are, Ministers of Foreign Affairs of Singapore and Thailand respectively.

It is well known that Turkey has been actively participating in number of dialogue and cooperation platforms in Asia. For example, Turkey is among the founding and most active member states of the Conference on Interaction and Confidence Building Measures in Asia (CICA) and took over the CICA Chairmanship from Kazakhstan at the Third CICA Summit held in Istanbul on 7-9 June 2010 for a period of two years. Turkey’s Chairmanship was extended by the member states for another two years (2012-2014). Turkey handed over the Chairmanship to the People’s Republic of China in the middle of 2014. Russia, China, India, Pakistan, Thailand, the Republic of Korea, Vietnam, Cambodia, Bangladesh, and Mongolia which are participants of ARF are at the same time member states of CICA.   Indonesia, Japan, Malaysia, the Philippines and the US which are also ARF participants are Observer states of CICA.[12] Turkey’s very active membership in CICA attests to its active involvement and the potential to shoulder responsibility in the “Northeast and Southeast Asia as well as Oceania” region.

In the light of all the above, it is our belief that Turkey’s participation in ARF will be beneficial to both ASEAN and Turkey as well to the whole ARF participant states.

[7] Merced, “‘Partners’ For Change: Understanding the External Relations of ASEAN”; Thuzar, “What Does It Take to Join ASEAN?,” 6.

[12] “Relations between Turkey and the Conference on Interaction and Confidence Building Measures in Asia (CICA),” Republic of Turkey Ministry of Foreign Affairs, accessed August 1, 2018, http://www.mfa.gov.tr/relations-between-turkey-and-the-conference-on-interaction-and-confidence-building-measures-in-asia.en.mfa.