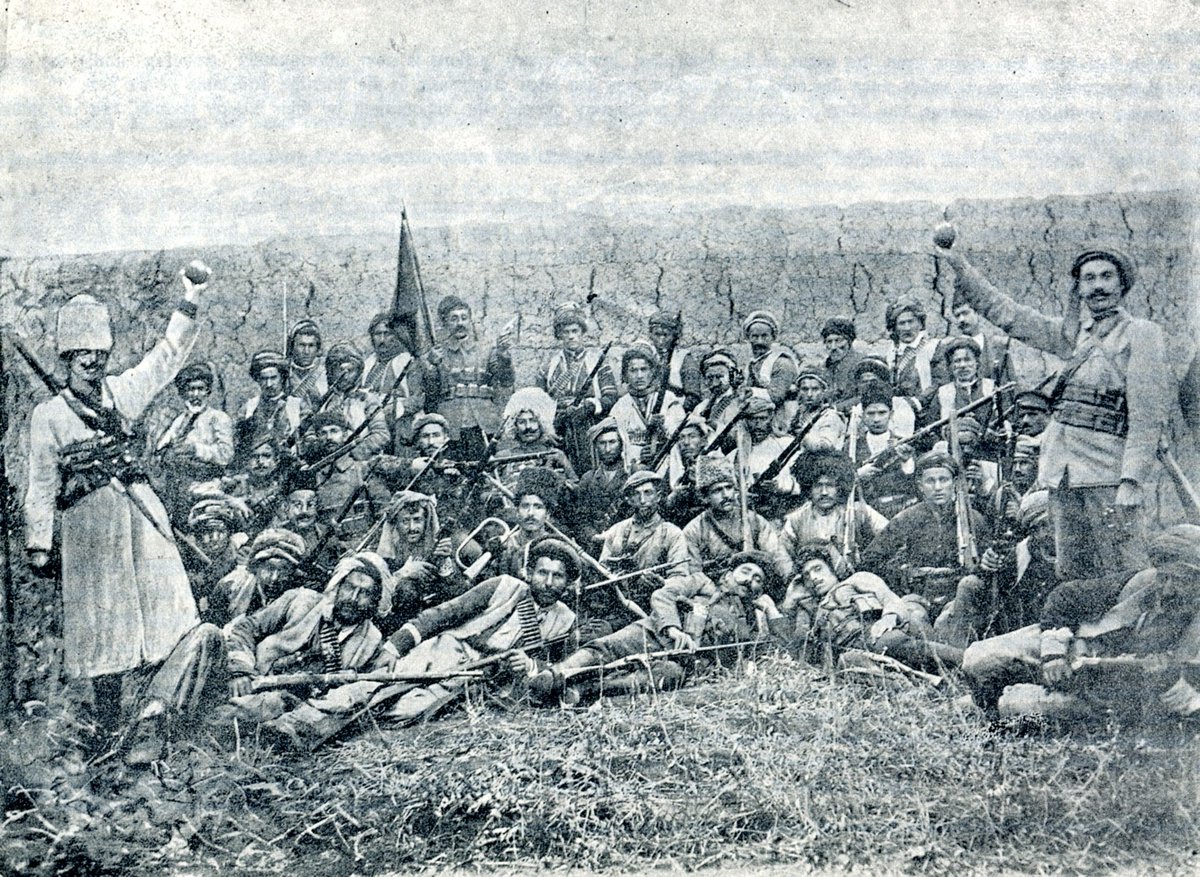 The subject of the 1915 Van revolt is an integral part of the highly controversial Armenian Question. The long-disputed 1915 events are significantly connected to the Van revolt and its aftermath. A comprehensive discussion of the 1915-16 events would be incomplete without reviewing the circumstances leading up to the Van revolt and its long-term impacts. Similar to the relocation of the Armenians, the Van revolt is a subject of dispute, but also historical distortion. The years of history in the city preceding to the revolt need to be well-researched and the facts need to be separated from the distortions in order to obtain a comprehensive understanding of the 1915 events.

A Place That Suffered From Radicalization, Polarization And Unique Ferocity

Historian Justin McCarthy has expressed that there are a few examples in history with as great degree of mortality as that suffered in Van. The Van revolt is stated to have acted as a catalyst to the outbreak of revolts in other cities. It is written that the results of the Van revolt were so severe that they were a “pivotal component of the disaster of war in the Ottoman East”.[1] In addition, it has been interpreted that the 1915 relocation was not the mechanistic effect of the Van revolt, but the repercussion of the fear that other similar revolts could occur if a large-scale counter-insurgency strategy was not immediately implemented.[2]

The city's population consisted of Turkish and Kurdish Muslims and Armenian and Nestorian Christians, with only a small number of Jews and others. It was estimated in the seventeenth century that 35,000-45,000 lived in Van and that nearly 30% of the population consisted of Armenians. It is also explained that no one knows exactly how many lived in Van in the late nineteenth and early twentieth century. The population of Van Province in 1912 was listed as 509,797: 313,322 consisting of Muslims, 130,500 of Armenians.[3]

According to historian Guenter Lewy, as a consequence of Van being located in the “heartland of historic Armenia”, the city had been a center of Armenian nationalist agitation and a strong Armenian revolutionary tradition for a long period. Moreover, it was considered as a stronghold of the Dashnaks. One of the long-term outcomes caused by years of the radical Armenian activities was the gradual deterioration of the relations between the Armenians and Muslims in Van and the rising tensions between the two communities.[4] The deteriorating of relations before and the unique ferocity of deaths during the Van revolt has been attributed to the long-standing Armenian revolutionary policy of polarizing the Armenian and Muslim communities.[5]

Bloody Reprisals As An Aim Of The Armenian Revolutionaries

The Armenian revolutionaries were not only aiming to prepare conditions for an outbreak of inter-communal war between the Armenians and Muslims, but they openly stated and demonstrated that they were hoping for large numbers of innocent Armenian victims from bloody reprisals. Important statements of various Armenian revolutionaries clearly verify this fact. During an interview with a former director of an Armenian school in Istanbul, a Huncak leader explained that “their attacks against Kurdish civilians had to provoke counter-killings, as it was the only way to achieve a Russian and/or British intervention”.[6] During the incident of the Armenian Revolutionary Federation’s (Dashnaksutyun - ARF) attack on the Ottoman Bank in 1896, an ARF leader, Karekin Pastermadjian (Armen Garo), confessed to a bank official “The more the victims, the better it will be for our cause”.[7] Another ARF leader, Arshak Vramian, told the French Vice Consul in Van:

“It does not matter if the Armenians are killed instead of living as they are living! We are determined to restart the revolutionary action we had suspended for four years; for every assassinated Armenian we will kill ten Kurds, and if necessary, we will attack higher [characters]: valis [governors], ministers and even the sultan.”[8]

Many Armenian and pro-Armenian authors claim that the Van revolt was not a planned occurrence and was realized only for the purpose of “self-defense”. While it has been stated that fear and being forced to take sides with their co-religionists have been factors that made some Armenians unwillingly take part in the fighting during the aftermath of the Van revolt, evidence has been put forth indicating that the Van revolt was planned and not purely for self-defense as the pro-Armenian sources claim. Fear of reprisals was present and did cause some Armenians to unwillingly kill Muslims and destroy houses and government buildings. However, there have been many reported cases of first murdering soldiers, gendarmes, officials, followed by robbery, rape and extortion of civilians. Such actions have been described as a constant pattern and were certainly not acts of self-defense. Some Armenians who had previously not been involved in the fighting also participated in the attacks on the Muslims during the retreat of the Ottomans and the approach of the Russians. These Armenians united with the Armenian partisan bands.[9]

With regards to the allegations of the necessity for “self-defense” expressed in pro-Armenian sources, historian Maxime Gauin also indicates the baselessness of such allegations with the statements of various foreign diplomats on the regional security prior to the 1915 revolt. One example statement provided by Gauin is an explanation by the British Vice-Consul in Van, Ian Smith, observing in 1914 “Since the arrival of the present vali, Tahsin Bey, strong measures have been taken [in the province of Van] against various Kurdish brigands, so at present the Armenians have little to complain in this respect”. Similarly, the French Vice-Consul wrote in 1914 that the vali Tahsin was a “civil servant of the highest value”, who restored order everywhere.[10] Lewy adds an explanation regarding some foreign diplomats concluding that the high death toll was an intended outcome of the relocations. While the diplomats were well-informed and observed the deaths and the complicity of many local officials in the murders, their understanding regarding the mindset and real intentions of the Young Turk leadership was limited to hunches and speculation.[11]

Furthermore, it is stated that the subject of “self-defense” is not only a common claim in the pro-Armenian sources, but was utilized by the Armenian revolutionary committees as a guise for a coherent strategy that materialized in 1912 and was based on the belief that Russian interventions would succeed. Additionally, there is a tendency among supporters of the “genocide” claims to extrapolate a threat to Ottoman Armenians in the whole eastern Anatolia based on problems of banditry in Van and Bitlis. Another tendency is to ignore the radical improvement of public security in these provinces in 1913-14.[12]

As explained by McCarthy, on one hand, pro-Armenian sources claim that there was never a revolt, that any Ottoman attacks on Armenians were unjustified while any Armenian fighting was “self-defense”. On the other hand, the Ottomans observed and described the revolt’s development in their secret documents. The common pro-Armenian assumption that the Ottoman attacks were “mindless massacres” is not only absent in the Ottoman documentation, but it is not logical with regards to the realities of the Ottoman war effort. For instance, the claim that Ottoman soldiers were assigned to hunt down Armenians during a period when they were badly needed at the front is non-sensical.[13]

Moreover, the Ottoman forces are accused in pro-Armenian sources primarily of slaughtering peaceful, loyal Armenians in five regions: Havasor (Gürpınar), Timar (Gevaş), Başkale, Çatak, Saray. However, Ottoman documentation indicates that these areas, which are all provinces of Van, were strongholds of the revolt. It is explained that even Armenian sources state that Ottoman attacks on Armenians of the Timar and Havasor regions began well after the revolts broke out there and one day before the Van revolt began. Notwithstanding, McCarthy also adds that the fact that the Ottomans were fighting revolts does not mean that great numbers of innocent Armenians did not die. There were instances in which some Ottoman soldiers were affected by sentiments of revenge, hatred and ill-discipline.[14]

Russia's Non-Negligible Role Before And During The Invasion Of Van

It is also important to underline the connection between the Armenian revolt and the Russian invasion of eastern Anatolia. With its ambitious aims of expansionism, Russia was a prominent culprit in the rising tensions and increasing bloodshed in the east. Actions such as the provision of arms, money and training to the population, provoking of nationalist propaganda between the Armenians, Turks, Kurds were among Russia’s methods of expansionism. Furthermore, McCarthy points out that there were two factors which should have decreased the losses and allowed the Ottomans to push the Russians back: 1) Interior lines of communication 2) An attack through Iran. Those factors were largely negated as an outcome of the Armenian revolt. The assistance provided to the Russians through Armenian spies and scouts was at such an extent that it cannot be exagerrated. The Russians’ decision to invade Van was made on the basis of intelligence from Armenians. The Armenian legions were led by natives of the province as they advanced toward the Russian conquest of Van.[15]

In an extensive historical subject like the 1915 Van revolt, there are numerous factors that are interconnected and parties with different approaches and objectives. While there are historical facts that have been confirmed through research from archives and other sources, there are also debatable subjects that are impossible to be confirmed precisely. Additionally, there are subjects that are being distorted, often due to insufficient and/or improper research or politicization of history. The Van revolt and its bloody repercussions constitutes one of history’s numerous lessons that actions of radical nationalism and ambitions of expansionism lead to death, destruction and deep fragmentations. It is sad to observe that presently, more than a century after the 1915 events, the Van revolt continues to be a matter of dispute and a means of holding on to vindictiveness instead of a harsh historical lesson. As both the Turkish and Armenian sides have suffered as a result of Russia’s ambitions and policies of expansionism in eastern Anatolia, the subject of Russia’s role and responsibility in the long-term deterioration of the Turkish-Armenian relations can possibly be utilized as a first step for Turkish and Armenian historians to sit at the table and conduct unbiased and unpoliticized historical research.

*Photograph: Armenian rebels who massacred tens of thousands of Turkish and Kurdish Ottoman citizens in the Van Revolt. (Source: twitter.com/fcarmenia/status/839487628567265280)

[8] Gauin, Uneven repression: The Ottoman state and its Armenians, p. 119.