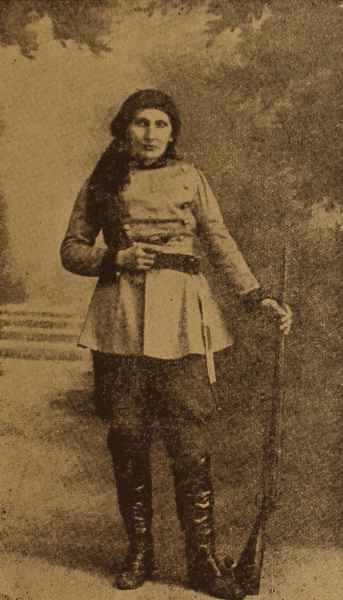 A brief biography of Sose “Mayrig” Vartanian published in the “This Week in Armenian History” page on the website of the Armenian Apostolic Church’s Eastern Prelacy presents another description of the radical nationalist Armenian mindset. Mrs. Sose “Mayrig” Vartanian and her two sons are the family of known Dashnak fedayee Serop Aghpyur. Mrs. “Mayrig” joined the Armenian Revolutionary Federation – ARF (Dashnaksutyun) in the 1890’s. It stands out that all of the components in the biography of Mrs. “Mayrig” were prepared in a way that would awaken feelings of inspiration and sympathy in Armenian readers.

It is expressed that the reason the Dashnaks gave Sose the “Mayrig” surname was the maternal care she gave to the Armenian youth. According to this explanation, the ARF members viewed themselves as an extended family. On the other hand, it must not be forgotten that the Dashnaks constituted a “family” which vowed to take the lives, property and lands of the Muslim families. It is also recorded in the historical archives that they considered the Armenians that did not support their cause as enemies.

Serop’s motto “Boys, remain without bread, but don’t remain without a weapon.” emphasized in the biography is quite telling regarding the Armenian thesis. It is possible that those who support the Armenian thesis and those who are uninformed on the history of the Armenian issue may think that Serop’s motto reflects an understanding that puts forward the safety of the Armenian youth. However, when the armed activities of the Dashnaks are taken into account, it comes to light that such a slogan is not rooted in safety, but in a radical mindset with a predisposition towards hate, violence and terror. While the Dashnaks present Turks as enemies, they consider themselves as the victims of Turkish oppression. Descriptions such as “Kemalist danger”, “heroic defense of Van”, “self-defense against Kurdish and Turkish attacks”, “Turkish and Kurdish injustice and outrages” particularly reflect the radical Armenian mindset.

It is explained in the biography that the Dashnak militants would not marry in principle, but if they were married, they would stay away from their families. Although the example of Mrs. Sose and her family constitutes a deviation, it is possible to see that the way this family is emphasized in the radical Armenian narrative is an attempt to tell an extraordinary and inspiring story. The themes of struggle and sacrifice are highlighted while expressing the actions of Sose and her family. In addition, the way the clash in 1899, in which Sose lost her family, and its aftermath is described should be seen as an attempt to engage the readers’ emotions.[1]

Online sources about Mrs. Sose appear very scarce. Interestingly, while it is stated in her biography on the Armenian Eastern Prelacy website that Mrs. Sose lost her sons in a clash with Turkish and Kurdish forces in 1899, it is written on the website of the Armenian Relief Society that “neither of Sose’s two sons survived”[2] the so-called Armenian genocide. There is a significant time difference between the events in which her sons died described in these two websites. In this context, there appears to be an interesting contradiction.

The Armenian Relief Society has established a network of kindergartens in Nagorno-Karabakh named “Sose” in “Mayrig”s memory. Mrs. Sose’s name was also given to an Armenian film festival. The radical Armenians living in Armenia and the Diaspora considering the Dashnak, Hunchak and Ramgavar Armenians, who conducted violence and terror activities against the Turks, as heroes and organizing memorial services is a striking Armenian tradition that has been ongoing for years. The establishing of a kindergarten network with the name of Mrs. Sose, who has participated in the separatism efforts against the Turks, constitutes another example of attempts to plant seeds of animosity in the minds of Armenian children.

When viewed from a different perspective, it will be seen that Mrs. Sose Vartanian’s story is an example showing that the roots of radical Armenian nationalism, which has been breeding violence and Turcophobia, go much earlier than the Relocation and Resettlement Law. The Armenian radicals, men and women all together, internalized Turcophobia and attacked the Turkish people inside and outside of the battlefields. In the biography, while it is alleged that the Armenian cause’s men – women solidarity was carried out in the name of struggle, sacrifice and virtue, it is clear that is serves animosity and separatism. Presenting the Turks as enemies, describing the male and female Armenian radicals as heroes to children, describing the Turkish rulers as “oppressive enemies” are among the perception management traditions that the radical Armenians are implementing. A grim reality is that this perception management has a long and influential past.