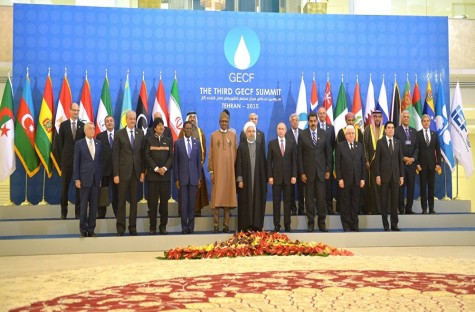 On 23 November 2015, the 3rd Gas Summit of the Gas Exporting Countries Forum (GECF) convened in Tehran, Iran with the participation top-ranking delegations from member/non-member countries and international organizations, following the 17th Ministerial Meeting of the GECF on November 21.

Originally established in 2001 in Tehran, Iran, the GECF became a full-frame international organization at the 7th Ministerial Meeting held in Moscow, Russian Federation, on December 23, 2008. Its headquarters are situated in Doha, Qatar. Its current secretary-general is Seyed Mohammad Hossein Adeli, who is an experienced Iranian economist, diplomat and academic.[1]

The GECF provides a framework for exchanging experience and information among Member Countries. It is a gathering of the world’s leading gas producers and was set up as international governmental organization with the objective to increase the level of coordination and strengthen the collaboration among Member countries. GECF also seeks to build a mechanism for a more meaningful dialogue between gas producers and gas consumers for the sake of stability and security of supply and demand in global natural gas markets.[2]

The organization is aiming to support the sovereign rights of its Members over their natural gas resources and their abilities to develop, preserve and use such resources for the benefit of their peoples, through the exchange of experience, views, information and coordination in the following gas-related matters: worldwide gas exploration and production trends; present and anticipated supply-demand balance for gas; worldwide gas exploration, production and transportation technologies; structure and development of the gas markets (regional and global); transport of gas - pipelines and LNG carriers; interrelationship of gas with oil products, coal, and other energy sources; technologies and approaches for sustainable environmental management, taking into account environmental constraints, national regulations and multilateral agreements on environment and their impact on volume and sustainability of gas consumption; techniques and approaches for maximizing the contribution of natural gas resources, at all stages of the value chain, to the promotion of sustainable economies and human resources development in Member countries.[3]

During the summit, the Heads of State and Government and other top-level delegations exchanged their views and discussed developments, trends and policies on energy, gas in particular, and reaffirmed their support for GECF’s objectives.

Participants also issued the Tehran Declaration in which they stressed role of gas in the global sustainable development and called for cooperation among the forum’s member states and expansion of multilateral relations and joint investment projects.[5]

Also, on the occasion of the 3rd GECF Gas Summit, a message to UN Climate Change Conference (COP21) held in Paris, was conveyed, promoting natural gas consumption as the cleanest fossil fuel with a vital role in the global energy mix aiming to achieve Sustainable Development Goals (SDG)[6] for a clean, reliable and efficient source of energy.[7]

The summit also saw the announcement of Azerbaijan as the newest Observer Member to the GECF.[8]

Natural gas, which has a considerable share in the world energy consumption, is expected to gain more significance in the future. There are increasing international concerns regarding climate change, reduction of carbon dioxide emissions and preservation of the environment. Therefore, these concerns puts natural gas to the spotlight as the cleanest fossil fuel, replacing other energy sources such as oil and coal.

Furthermore, the issues of energy security and energy diversification also is a major concern of energy consuming countries. In relation to this, the introduction of natural gas-rich countries such as Turkmenistan and Azerbaijan into the energy market next to leading energy providing countries such as Russia has been major development. Moreover, following the recent agreement with P5+1, Iran, which has large gas reserves but rather low exports of gas, is also expected to play a bigger role in the global energy market.

Thus, the increasing importance of natural gas puts the GECF, which includes gas exporting heavyweights such as Russia and potential major players in the gas market such as Azerbaijan and Iran, into the spotlight. As a matter of fact, the high-level participation to the summit reveals that the GECF is gaining importance. For instance, 3rd Gas Summit of GECF was attended by nine heads of states and government. On the other hand, the first GECF summit in Qatar was participated by four heads of state as its guests, while the second summit, which was held in Russia, was participated by six heads of states.

Furthermore, Azerbaijan becoming an Observer Member and the participation of the president of Turkmenistan, which is neither a GECF member nor observer, to the summit as a guest suggest increasing international interest to the Forum. Indeed, the forum is anticipated to have a say in the worldwide energy market and opportunities of exchanging expertise and know-how makes the forum appealing.

With the latest addition of Azerbaijan, the Forum has 19 Members and Observers in total. The Member countries of the Forum are: Algeria, Bolivia, Egypt, Equatorial Guinea, Iran, Libya, Nigeria, Qatar, Russia, Trinidad and Tobago, United Arab Emirates and Venezuela. Azerbaijan, Iraq, Kazakhstan, the Netherlands, Norway, Oman and Peru have the status of Observer Members.[9]

The GECF members currently account for almost 70 percent of the world’s current proven reserves of natural gas, while accounting for 42 percent of global gas production, about 65 percent of gas trade in the form of liquefied natural gas (LNG), and 40 percent of pipeline gas transmission.[10]

GECF is also considered by some to be having the potential to become an OPEC like organization, suggesting a role in the pricing process of gas. For instance, during the 3rd GECF summit, there were some calls on the GECF to sustain the pricing mechanism of gas in the international market to the advantage of its members.[11]

Indeed, members could play an influential and active role in the global energy market, gas supply and exports in the long run through coordinated policies, technical cooperation and joint investment projects etc. However, experts believe that GECF is unlikely to have an impact on the global market in terms of prices, at least in the short-run. It is stated that GECF could influence prices of LNG, since it is the only gas product that can be shipped in tankers and, therefore, priced in short-term contracts. On the other hand, majority of gas is transferred through pipelines and its contracts and investments are long-term, making it hard to make changes in prices.[12]

Regardless, the increasing importance of natural gas and GEFC’s potential to have a major influence in the energy market makes it worthwhile to keep an eye on this gathering of gas heavyweights and future players.