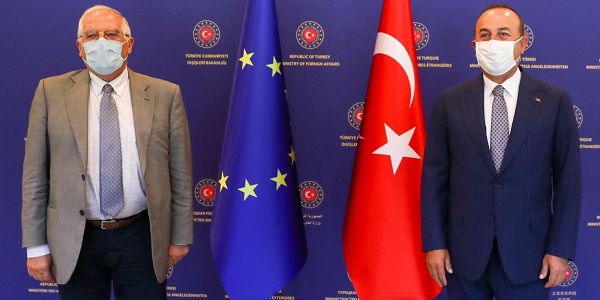 At the beginning of this month, on July 6-7, Vice President of European Union (EU) Commission and High Representative of the Union for Foreign Affairs and Security Policy Joseph Borrell Fontelles visited Turkey. In the visit during which the Turkey-EU relations were extensively discussed, regional issues that have an impact on relations, especially Eastern Mediterranean, Libya, Syria, were also taken into consideration.

High Representative Borrell and Turkish Minister of Foreign Affairs Mevlüt Çavuşoğlu discussed the possibility of the EU assuming the role of a mediator between Turkey, Greece, and Greek Administration of Southern Cyprus (GASC). Borrell stated that his visit to Turkey was for the purpose of coming up with a solution concerning the tensions between Turkey and Greece and the EU is planning to organize a negotiation meeting between these two parties.[1]

Borrell emphasized that conflicts in Syria and developments in the region have been directly affecting EU’s interests and safety. He also added that the elements that endanger the safety have been the unrestricted use of power, terrorism, and political instability.[2]

Stating that acting while looking after the common interests with Turkey would be the best strategy, Borrell emphasized that Turkey is a regional country that has been negatively affected by developments in Syria and Libya. However, Borell argued that Turkey has been maintaining an aggressive stance concerning the Eastern Mediterranean, that the EU’s message about this issue is clear, and that the Union is determined to protect its values and the sovereign rights of its member states. At the same time, he expressed that GASC is an EU country and that Turkey needs to acknowledge this fact.[3] We had covered in our previous articles that GASC’s politically motivated accession to EU was mainly carried out to create a barrier for Turkey in terms of the Eastern Mediterranean issue. We had furthermore explained, based on legal reasons, why GASC should not have been made an EU member.[4] Therefore, the EU -which claims to defend the rule of law- describing this unlawfulness as “Turkey’s aggressiveness’’ does not overlap with the principles of the EU.

In a session of the European Parliament (EP) on 9 July 2020, EU High Representative Borell stated that he is not pro-war after Italian, French, Greek and GASC members of EP criticized Turkey’s presence in Eastern Mediterranean and expressed their views again on ending Turkey’s EU membership negotiations.[5] Experts have shared the view that the EP is the EU institution that displays the harshest stance against Turkey, and that the current reactions towards Turkey therefore come as no surprise. As such, it was indicated that there is no need to dwell on the anti-Turkey stance displayed at the EP.

Cooperation with EU in every area is a desirable situation for Turkey. However, rather than to act based on political motives, the EU is expected to act by recalling its objective values. Each issue dealt within the meeting between Turkey and Borrell is crucial. The EU is a remarkable platform for the solution of these and similar issues. Due to having a say in the international arena, it is one of the EU’s missions to create a safe atmosphere for member and candidate countries. High Representative Borrell emphasizing that common interests with Turkey cannot be overlooked, expressed during the session at the EP where he gave information about the meeting with Turkey, at least shows that Borell is trying to maintain an objective stance towards Turkey.

* This is the English translation of an article originally published in Turkish on 16 July 2020. AVİM Trainee Damla Uslu contributed to the translation of this article.