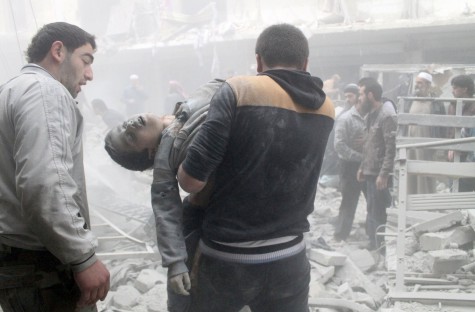 Both those fighting for and against the Syrian government are terrorizing the country’s civilian population in defiance of a recent Security Council resolution, a panel of investigators told the United Nations Human Rights Council on Tuesday.


But while atrocities are increasing, the international community, apart from providing humanitarian aid, “has done little but bear witness to the plight of those caught in the maelstrom,” according to Paulo S. Pinheiro, the panel’s chairman.


“We have an enormous volume of testimony,” Mr. Pinheiro said as he presented the panel’s seventh report on Syria, citing over 2,700 interviews as well as other documents and photographic evidence. “What we lack is a means by which to achieve justice and accountability.”


The panel has urged the Security Council to refer Syria to the International Criminal Court or some other judicial authority. “Compassion does not, and should not, suffice,” Mr. Pinheiro said. “We cannot continue to sit for years in these rooms writing reports and making speeches lamenting the blood that is running in Syria’s streets.”


Mr. Pinheiro said the Syrian conflict, now entering its fourth year, had hit a new low with the death from starvation of civilians, including children, in the Damascus suburb of Yarmouk.


A million Syrian children are cut off from the reach of aid agencies because of fighting or blockades, he added.


The panel also reported that inmates at the government-controlled prison in Aleppo had died of starvation and infectious diseases caused by systematic denial of food, sanitation and medical care, and that “severe torture” continues in government detention facilities.


The directors of Syrian intelligence agencies and detention centers using torture are on a “perpetrators list” that identifies individuals and organizations that are responsible for war crimes and other human rights violations, Mr. Pinheiro said.


Also on the four lists the panel has given to the United Nations High Commissioner for Human Rights are military commanders, armed groups that have targeted civilians, and airports from which “barrel bomb” attacks have been planned and launched. The bombs contain hundreds of pounds of explosives and shrapnel such as metal shards or nails.


The panel also said that the Islamic State of Iraq and Syria, a group linked to Al Qaeda, had summarily executed prisoners, including civilians and combatants of rival rebel groups.


In one of several instances detailed in the report, the United Nations panel said ISIS fighters had killed combatants of two other factions after fighting in the northern town of Tel Abyad in January. The panel cited witnesses who said most victims had their hands tied behind their backs and were killed with a single shot to the back of the head.