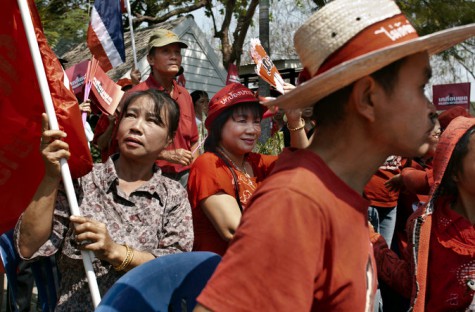 LAMPHUN, Thailand — Each time Muean Chimoon leaves his wooden house in northern Thailand, he pays homage to a portrait of King Bhumibol Adulyadej, a father figure and long a symbol of national unity.


“We have a king who loves everyone,” said Mr. Muean, a retired bus driver who exudes the renowned cheerful insouciance of rural Thailand.


But when the conversation turns to politics, Mr. Muean’s smile disappears. He lashes out at the “arrogance” of protesters in Bangkok who want to overthrow the government, which has overwhelming support in the north and northeast.


“Bangkok has always wanted to choose their own prime minister,” Mr. Muean said. “They don’t care what northern people think — they just care about themselves.”


Thailand is the land of the Thais, of course — but also of the Lanna, Lao, Mon, Malay, Khmer and Chinese, among other ethnic groups subsumed into the country over the centuries. Eight years into Thailand’s political crisis over the influence of the prime minister’s family, some of those ethnic identities are resurfacing. The country’s political divisions roughly follow the outlines of ancient kingdoms and principalities, rekindling bygone impulses for greater autonomy from Bangkok.


Banners strung across roads in the north calling for secession have been among the most extreme expressions of the north’s bitterness toward Bangkok. The northern Lanna kingdom, including Lamphun, was annexed by Bangkok in 1899, and for decades its people have spoken a dialect distinct from the Thai officially recognized and promoted by the central government. At the time of annexation, the region had its own written language, which used a different alphabet from Thai.


Less radical have been proposals for devolution of the centralized powers of the government.


A group of local government associations and scholars, the People’s Network for a Self-Governing Administration, submitted a bill to Parliament last year calling for greater self-administration of provinces.


“We propose that power be restructured,” the group said in a statement last month. Among the proposals, which have not yet been taken up by Parliament: Provincial governors would be directly elected and more taxes would be collected and spent locally. The group says Bangkok “lacks knowledge or neglects the differences of local identities.”


Tanet Charoenmuang, a prominent commentator and proponent of greater autonomy for northern Thailand, says northerners perceive government institutions as favoring the capital at the expense of the provinces.


“Injustice has helped fertilize localization,” Mr. Tanet said. “Thailand has been an overcentralized state, and a sense of localism is quietly re-emerging.”


Much of the appeal of Prime Minister Yingluck Shinawatra and her family for the north is that they have been trying to refocus government resources and attention toward rural areas in recent years, cementing the loyalty of villagers. That push started under the leadership of her brother, Thaksin Shinawatra, a prime minister who was ousted in a coup supported by the Bangkok elites, the antecedent to the current standoff.


Government supporters say secessionist talk is a measure of their feelings of frustration, but very few are taking it seriously at this point. Yet the notion of secession appears to have been taken very seriously by the army, which vowed to investigate and bring legal action against anyone advocating leaving Thailand.


Building modern Thailand has been a painstaking and sometimes bloody process that took centuries but accelerated over the past century.


Local languages and dialects were banned from schools. Authoritarian leaders changed the country’s name from Siam to Thailand and created what today are icons as a sort of nationalist glue for the country. Pad thai, the stir-fried noodles so common in Thai restaurants, was introduced by the authorities as a national dish. The government also promoted the use of a greeting, “sawasdee,” that is used nationwide. Decisions about everything from the appointment of Buddhist clergy to the architecture of Thai temples were transferred from the provinces to Bangkok.


But perhaps most important for the cementing of a Thai identity has been the long reign of King Bhumibol, who was crowned in 1950. The king is now ailing, and his absence from civic life — he has not publicly commented on political tensions for several years — has added to a sense that the country has lost its rudder.


Three governments supported by northern and northeastern voters have been removed from power since 2006, one — Mr. Thaksin’s — by a military coup and two in highly politicized court judgments. For the last five months, protesters in Bangkok have demanded the overthrow of the government and a reduction in the influence of the Shinawatra clan, which is from the northern city of Chiang Mai.


The prospect that a fourth democratically elected government could be removed by the courts in coming weeks has been met by seething anger in villages across the north and northeast. Protest leaders call government supporters “buffaloes,” an insult connoting upcountry ignorance.


Mr. Ponganand, the local council member from the northeast, describes southerners, who on some days make up the bulk of protesters in Bangkok, as “extremists.”


Boontham Kaewkard, a wood carver here, said he was ready to confront the antigovernment forces if they removed the prime minister. But he laughed at talk of secession. “It’s a crazy idea,” he said. “Thailand must remain Thailand.”


Yet from a political standpoint, the Thai electoral map already shows two Thailands: The north has consistently voted for the governing party in recent elections, while the south has either voted against the party or obstructed elections, as protesters did in February. Both sides warn of civil war if tensions escalate.


Government supporters say a sense of solidarity has emerged between northern Thailand and the vast northeastern Isaan plateau, where the maternal tongue, a form of Lao, is similar to the Lanna language of the north.


Chalida Chusirithanakit, a pharmacist in the northeast, says the current round of protests has kindled “a real sense of pride in being Isaan people,” especially among the government supporters, called the red shirts.


“They feel they have struggled and have been oppressed for a long time,” said Ms. Chalida, who moved to Isaan from northern Thailand nearly 40 years ago.


Support for Ms. Yingluck and her party is so strong in Maha Sarakham Province that “even a dog in a red shirt could run in an election and win,” she said.


The red shirts have staged a number of demonstrations in recent weeks in what they say is a message to the Bangkok establishment showing the strength of their numbers — and their readiness to fight back if the government is toppled.

At a meeting in Chiang Mai last month, a leader of the red shirts, Nisit Sinthupai, spoke about a Buddhist monk who is considered the patron saint of northern Thailand, Kru Ba Srivichai. The monk, who died eight decades ago, is lionized for his piety and devotion to his followers.


But Mr. Nisit emphasized a facet of the monk’s life not covered in Thai textbooks: his long and defiant struggle to use the northern Lanna language and his refusal to bow to the authorities in Bangkok who sought to curtail his autonomy — and arrested him four times.


This defiance was his “mightiness,” Mr. Nisit said, adding that the north and the northeast had new strength together.


“These two regions are the key power bases of democracy,” he said. “We are the majority.”