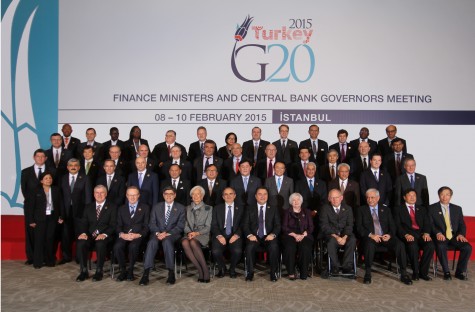 The year of 2015 is noteworthy for Turkish foreign policy for two reasons. First, 2015 is the centenary of the Victory of Çanakkale. The second is that Turkey holds the presidency of the Group of Twenty (G-20) this year. Turkey’s presidential term of such an international forum that deals with global economic and financial issues, will, on the one hand, contribute to its efforts to dynamize the already existing agenda of the group, and on the other hand, contribute to strengthening its image in the international arena. This paper will discuss how Turkey will contribute to international discussions by means of its G-20 presidential term.

As a matter of fact, since 1 December 2013 Turkey takes part in the Troika, which is the management mechanism of the group, and will hold this position until 1 December 2016. Hosted by Turkey, the G-20 Leaders Summit will take place in Antalya in November. In addition, meetings in the level of ministers and heads of central banks will be held in addition to various meetings and activities on different levels. In fact, the first series of these meetings took place between the ministers and heads of central banks in Istanbul on 9-10 February. In addition to the G-20 members and those who were invited by Turkey as the term President, high-level representatives of international organizations attended the meeting.

This meeting, which is viewed as a preliminary for the summit in November 2015, dealt with the following issues: Global economic outlook, inclusive strategies of growth, implementation of financial regulatory reforms, international taxation and IMF 2010 quota and management reform.

The G-20 came into existence following the economic crises which took place towards the end of the 1990s. Taking into consideration the status of international economy in the last 20 years, one can say that economic crises born in a few countries usually spread out in various regions in the world. While the crises in the pre-Cold War period could be handled by the leadership of the western states, today it is a global responsibility to cope with the economic crises. It is no longer possible to find a way out without the cooperation of the emerging economies. It has become evident in this period, which points to a shift in center of gravity in global economy, that there is a need of developing mechanisms of global governance. The Group of Twenty can be considered as a consequence of this transformation in global governance.

The G-20 which was established at the meeting of the G-7 ministers and heads of central banks on 25 September 1999 in Washington, constitutes the %90 of the world economy, %80 0f the world trade and two thirds of the world population. The group brings together emerging economies and the developed economies. It is composed of the following countries: Argentina, Australia, Brazil, Canada, China, France, Germany, India, Indonesia, Italy, Japan, Republic of Korea, Mexico, Russia, Saudi Arabia, South Africa, Turkey, the United Kingdom, the United States and the European Union. In addition, high-level representatives of the IMF, World Bank and OECD attend the meetings of the group. In this framework, the G-20 fills a significant gap in global governance. It constitutes an important step in the pursuit of a more balanced and inclusive global governance where developed countries and emerging economies are represented in the decision-making process.

Some argue that the unofficial nature of the G-20 contributes to the effectiveness of the group. The group carries out its work in two main channels and is able to work in a wide range of issues.  In the finance track, it deals with the issues of global economy, international financial architecture, international taxation and climate finance; whereas in the Sherpa track it works on the issues of development, sustainable energy, anti-corruption, trade and employment. The group started to organize regular summit meetings following the global financial crisis in 2008 and it contributed to efforts to take measures such as increasing the resources of the IMF.

In the framework of its unofficial nature as well, the G-20 does not have a secretariat and the annual agenda and priorities of the G-20 for the current year are determined by the term president. Turkey’s priorities for its presidential term are considered under three main categories: i) Strengthening the Global Recovery and Lifting the Potential, ii) Enhancing Resilience, iii) Buttressing Sustainability. Under these categories, it is considered that Turkey may bring the following issues to the forefront based on its own experiences: sustainable development, development finance, Least Developed Countries (LDCs) and the status of women and children in the society.

It is considered that Turkey’s presidential term in 2015 would contribute to strengthening of its image in the international arena as well. In the current economic system, reforms to give more powers to the emerging powers in the IMF and the World Bank could not be put into practice for a period of time. In this framework, during its term Turkey would be able to act as a bridge between the developed countries and the emerging countries, and contribute to discussions of reviewing the system of global governance. Accordingly, Turkey invited Spain, Singapore and Azerbaijan, as well as the term presidents of Association of South East Asian Nations (ASEAN), the African Union (AU) and the New Partnership for Africa’s Development (NEPAD) to the G-20 meetings to be held this year.

Besides, with its industrialization process, small and medium-sized enterprises (SMEs) and its economic structure that uses technology, Turkey is a country that can be a source of inspiration for countries that are on track to development. With its young population, its attractive market for foreign investment as well as its growing infrastructure, Turkey has become the 6th biggest economy in Europe and 16th biggest economy in the world.  In addition, the Turkish economy has preserved its resilient nature toward the economic crises that emerged since the end of 1990s. It would be beneficial for Turkey to share its experience with other countries during its G-20 term presidency.

In light of all these, Turkey is expected to dynamize the G-20’s already existing agenda and contribute to the discussions held in the international arena. This will strengthen Turkey’s status in international affairs on economic and political platforms that affect each other positively. In other respects, Turkey’s term presidency of the Group of Twenty is expected to act as a driving force for the structural reforms, for rule of law to be reinforced and for the quality of education to be increased in the country. [i]