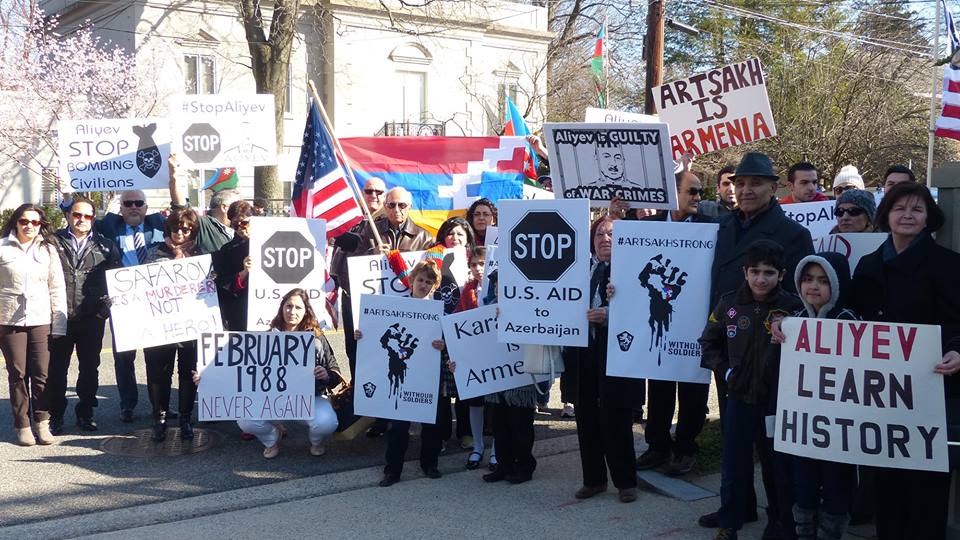 Capitalizing on the recent lull in relations between the United States and Turkey, the Armenian lobby has been harnessing the reservations of US politicians regarding Turkey in an attempt to push a genocide recognition resolution through the House of Representatives. H. Res. 220, ostentatiously aimed at genocide prevention, conflates the 1915 relocation of Ottoman Armenians during World War One – which both the Armenian lobby and the resolution refers to as the “Armenian genocide” – with present day massacres occurring in the Middle East.

The resolution then continues by conflating the aforementioned issue with the events of 1915 by stating that the “United States has a proud record of protesting and providing relief to Armenian and other Christian survivors of the Ottoman Empire’s genocidal campaign,” and that in seeking to protect the current victims of “modern day genocides,” the resolution hereby resolves that the United States “in seeking to prevent war crimes, crimes against humanity, and genocide against Christians, Yezidis, Muslims, Kurds, and other vulnerable religious and ethnic groups in the Middle East, should draw upon relevant lessons of the United States Government, civil society, and humanitarian response to the Armenian Genocide, Seyfo, and the broader genocidal campaign by the Ottoman Empire against Armenians, Assyrians, Chaldeans, Syriacs, Greeks, Pontians and other Christians upon their biblical era homelands.”[1]

The primary Armenian lobby organization, the Armenian National Committee of America (ANCA) have pinpointed two reasons that could explain H. Res. 220. Firstly, the impact of The Promise movie and Architects of Denial documentary as having “played a key role in challenging U.S. complicity in Ankara’s ongoing denial of the Ottoman Turkish government’s mass murder of over 2.5 million Armenians, Greeks, and Assyrian/Chaldeans from 1915 to 1923.”[2] Secondly, the objection of politicians to the conduct of Turkish government employees on US soil. To illustrate this point, Representative Jeff Denham tweeted on 19 May 2017 that he supported H. Res. 220. “for many reasons,” including what he terms the “bold display on American soil” of Turkish President Recep Tayyip Erdoğan’s bodyguards, before concluding that “we must stand against genocide.”

These views were shared by Representative Dave Trott. In an Op-Ed published in the Armenian Revolutionary Federation aligned Armenian Weekly, Trott refers to the behavior of Erdoğan’s body guards on US soil, then continues by stating that “this outrageous behavior was not an isolated incident. The Turkish government has a rich history of violence, brutality, and, of course, denial. From the Ottoman Empire’s campaign to exterminate the Armenian people to Erdogan’s thugs kicking peaceful protesters in the head in Washington, Erdogan and his high-priced lobbyists have continually shut down free speech and press in an effort to rewrite history,” concluding that his goal is to “always be a staunch defender of the Armenian community at home and abroad.”[3] On March 22, 2017, Trott introduced H. Res. 220, calling on the United States government to formally recognize the events of 1915 as genocide.[4] An article in the Los Angeles Times importantly noted that the district Trott represents in Michigan has a “large population of Armenian people.”[5]

The Armenian Lobby has also sought the assistance of Senator Chris Van Hollen in strengthening cooperation between the US and the Nagorno-Karabakh region of Azerbaijan that continues to be illegally occupied by Armenia. Earlier this year, Senator Van Hollen secured an amendment to oppose the use of US funds to help with the sale of weapons to Turkish security forces – which reportedly prompted the US government to withdraw the proposed arms sale. Asbarez also noted that Van Hollen was fundamental in helping to secure Maryland State Legislature’s recognition of the events of 1915 as the “Armenian genocide.”[6] Most recently Indiana Governor Eric J. Holcomb issued a proclamation recognizing the events of 1915 as the “Armenian genocide,” referring to the events as a “planned complete eradication of those indigenous communities by the Ottoman Turkish Empire during the first modern genocide that still requires justice.”[7]

The withdrawal of the arms sale by the administration was welcomed by ANCA Director Aram Hamparian, who stated that this decision reflected a “growing willingness among policymakers, diplomats, legislators from both parties, and the broader foreign policy community to openly challenge Turkey’s increasingly anti-American conduct.”[8]

The Armenian lobby has established a ‘Promise Coalition’ based on the interest garnered by the movie. This grouping is also being utilized to garner support for H. Res. 220.[9] Support for the coalition has been given by celebrities such as George Clooney, Christian Bale, Ryan Gosling, Cher, Elton John and Barbara Streisand. The Armenian lobby’s efforts have also been supported by the Hellenic Leaders Greek lobbying body. Most importantly, the Armenian Weekly, noted that “hundreds of Christian leaders, international religious-freedom advocates” held over 400 Congressional meetings calling on “on legislators to reject Turkey’s Armenian Genocide gag rule and draw on the lessons of that crime in preventing renewed atrocities against Christians and other at-risk religious minorities across the Middle East.” The intention of this broad-based campaign was to secure support for H. Res. 220 across a wide platform of opinion makers, civil society activists and religious figures.[10]

The deliberate conflation of the events of 1915 – described by many historians as the relocation of a population as part of counter-insurgency doctrine during World War One – with the on-going deliberate massacre of minorities in the Middle East by terrorist organizations such as ISIL is little more than a ploy by the Armenian lobby secure their own goals by seeking to capitalize on the lulls in US-Turkey relations. Actions such as H. Res. 220 have the potential to irreparably damage relations between the US and Turkey for what would be little more than a symbolic victory.

[1] "H.Res.220 - Expressing the sense of the House of Representatives regarding past genocides, and for other purposes," Congress.gov, accessed 21 November, 2017, https://www.congress.gov/bill/115th-congress/house-resolution/220/text.