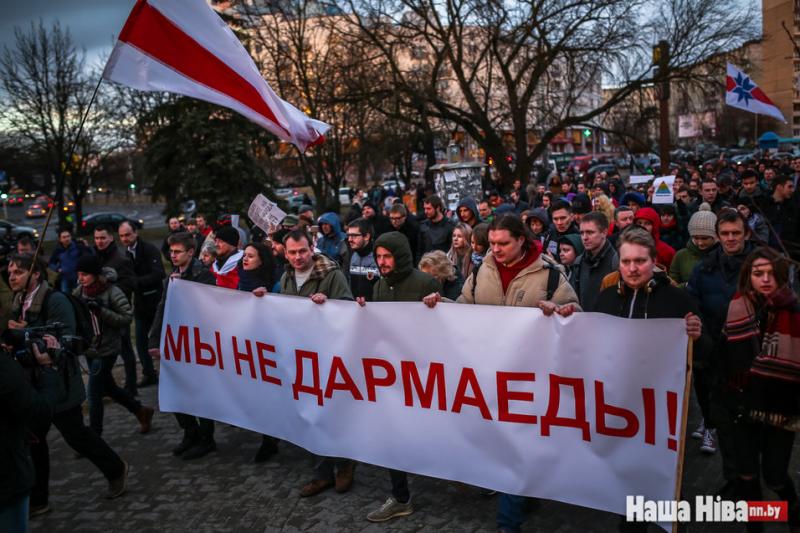 Since mid-February 2017, mass demonstrations have been taking place in Belarus against the Presidential Decree “on Prevention of Social Dependency” that was issued in 2015 to fight “social parasitism.” This Decree, referred as “social parasite tax,” compels those who work less than 183 days in a year to pay approximately 245 USD to compensate the “lost taxes” because of the unemployed, who otherwise would be paying taxes. This controversial decree caused the resentment of the Belarusians and triggered mass protests mostly attended by middle-aged and senior citizens. Following the first round of protests on 17-19 February 2017, Belarusian President Alexander Lukashenko declared that he suspended the Decree until 2018 to be reviewed and corrected. However this backtrack did not satisfy the Belarusians and demonstrations continued in March, as well.  Observers remark that the protests have been the largest demonstrations in the country, since the presidential election in 2010.

Besides the significance of the protests for their magnitude, the recent change of the Belarusian authorities’ attitude towards the protests from tolerance to repression, and the pro-Kremlin Russian media’s portrayal of these events require consideration. Until recently, Belarusian authorities adopted an unfamiliar soft-shelled attitude towards the demonstrations. However, this attitude transformed into a repressive one that became apparent by the arrest of at least seventeen people on 21-22 March with the charge of organizing a putsch to overthrow the government. On the other hand, the pro-Kremlin Russian media from the beginning represented the protests as a prolog to a “Belarusian Euro-Maidan.”

Large scale protests are not unfamiliar to Belarus. Ruled by Alexander Lukashenko since 1994, Belarus had witnessed mass protests and subsequent violent repressions after the presidential elections in 2006 and 2010. Yet, the recent protests are different from the previous ones.  Whereas protests in 2006 and 2010 were politically motivated reactions to the repression of the opposition and election frauds, recent protests are motivated by economic concerns. Actually it is this apolitical character of the protests that enabled the gathering of large crowds, despite the weak and ineffectual political opposition that was already crushed years ago. It can be seen that the downhill economic trends that Belarus has been trapped in for some years have reached a certain threshold by now.

As said, the 2006 and 2010 protests were met with adamant repressions, as a consequence of which Brussels and Washington imposed sanctions against Belarus for human rights violations. This time, however, until very recently, Belarusian authorities refrained from adopting repressive measures against the protestors. Although there have been detentions before and after the protests, there were no large scale arrests, and the arrestees were released shortly. This tolerant attitude of the Belarusian authorities, which is by no means usual in the “last dictatorship in Europe,” could actually be attributed to the changing foreign policy objectives of Belarus.

In short, as relations between Minsk and Moscow evolved into an uneasy one following successive frictions in various issues, Minsk began to pursue a balancing multi-vector foreign policy, including an effort to smooth down the tensions with the West. In that context, Belarusian authorities eased the iron fist on the already weakened opposition, which is not a real threat to the ruling Belarusian elite anymore, and performed several perfunctory acts, such as the election of two oppositional politicians to the parliament in 2016 parliamentary election, which is mostly viewed as nothing more than a ritual. Brussels and Washington, in return, lifted much of the sanctions, a move which is conditioned by political considerations in the context of the emerging "New Cold War" with Russia, rather than an improvement in the human rights record of Belarus.  In this context, the tolerant attitude of the Belarusian authorities to the protests could be viewed as another as another display vis-à-vis the West. Yet, this attitude did not last long. Apparently, concerns other than showing off to the West outweighed the reasoning of the Belarusian authorities lately.

Following the eruption of the protests, articles about a “color revolution" in Belarusian began to pop-up in pro-Kremlin media. These articles typically portray the protests as a prolog to a “Belarusian Euro-Maidan” accompanied by a rhetoric of “Slavic brotherhood” between Belarus and the Russia that is betrayed by the inadequate and detrimental policies of the Lukashenko regime in its endeavor to make up to the West at the expense of Russian interests. Significantly enough, Pro-Kremlin Russian columnists in their columns often “expose” the clues of the involvement of the “Ukrainian Nazis” and Polish and Lithuanian spies in the protests.

For anyone who is familiar with the “information warfare” carried out by the pro-Kremlin media, it is quite obvious that these articles are rather tacit messages and threats than analytical pieces. The message and the threat in these articles are pretty clear. With such articles, Russia warns Belarus to stop distancing itself from Russia and flirting with the West. Otherwise, the message goes, Minsk may risk facing another “Ukrainian scenario.”

In relation to the reaction of the Pro-Kremlin media, circulation of some rumors also catch eye. According to these rumors, a pro-Kremlin clique among the Belarusian ruling elite headed by the Minister of Interior Ihor Shunevich misinforms Lukashenko about the content and the goals of the protests. This pro-Kremlin clique portrays protests as an attempt of a “color revolution.” The rumor goes on saying that by encouraging Lukashenko to crush the protests violently, the pro-Kremlin clique hopes the West to react harshly leaving Lukashenko alone vis-à-vis Russia so that Minsk would be left with no choice other than gearing back to the Russian orbit. In addition to that, it has been reasoned that a turmoil in Belarus might be used by Russia as a pretext to interfere.

In this context, a dramatic shift in the attitude of the Belarusian ruling elite began to surface. On 20 March, Belarusian media circulated reports similar to those that appear in the pro-Kremlin Russian media, stating that a group of armed men with explosives broke through Belarus from Ukraine. On the same day, Lukashenko declared that Western intelligence agencies use the fifth column to undermine the regime in Belarus. Next day, he announced that dozens of militants trained in Belarus, Ukraine, Lithuania and Poland were arrested. On 21-22 March, media reported that the Belarusian KGB detained at least seventeen people, including those serving in Belarusian security establishment with the charge of preparing for mass riots.

Some commentators relate these alleged arrests to the misinformation that was provided to Lukashenko by his pro-Kremlin colleagues. However, it would be naïve to believe that Lukashenko, who is no less cunning than Putin or other post-soviet autocrats, would be easily deceived by his appointees.

In this context, it remains vague what caused Lukashenko to change his tolerant attitude towards the protests into an apparently repressive one. Certainly, to answer this question one must first verify whether the alleged arrests really occurred, and whether those who were arrested were really preparing for a putsch. Nonetheless, presently the scenario of a putsch looks unlikely. Then, what is going on in Belarus and among the ruling elite in Belarus? Has Lukashenko run out of patience? Has he been fooled by his pro-Kremlin appointees? Is he really scared of a color revolution? These are few questions among others that recent developments bring to mind.

In Belarus, 25 March is the celebrated as the Freedom Day as the commemoration of the establishment of the short-lived Belarusian People's Republic in 1918. On this day, Belarusian opposition traditionally organizes demonstrations against Lukashenko’s rule. One reason why the arrests occurred just few days before 25 March might be to discourage people to attend Freedom Day celebrations. If this is the case, one may think that Lukashenko has run out of patience and possibly begun worrying about a “color revolution.” However, given the weakness of the Belarusian opposition that lacks a social base and the apolitical character of the protests, this may not be the real case or at least the entire picture.

Another more plausible explanation may be that by changing his attitude towards the protests that caused animosity in Kremlin, Lukashenko intends to give Moscow a message that he will not be going too far in flirting with the West, by replicating the Russian rhetoric about “Western agents” and militants infiltrating into Belarus from Ukraine and other un-friendly countries to Russia, and so on. In other words, by falling in line with the Kremlin propaganda, Lukashenko seems to be assuring Moscow that Minsk is not going to court the West beyond a certain limit. If this is the case, one can think that Minsk is actually concerned about possible reactions of Russia and its “hybrid tactics.”