THE ‘ARMENIAN QUESTION’ IN UKRAINE - I: A POTENTIAL PROBLEM IN A PROMISING RELATIONSHIP BETWEEN TURKEY AND UKRAINE
Commentary No : 2021 / 42
Turgut Kerem TUNCEL
07.05.2021
10 min read 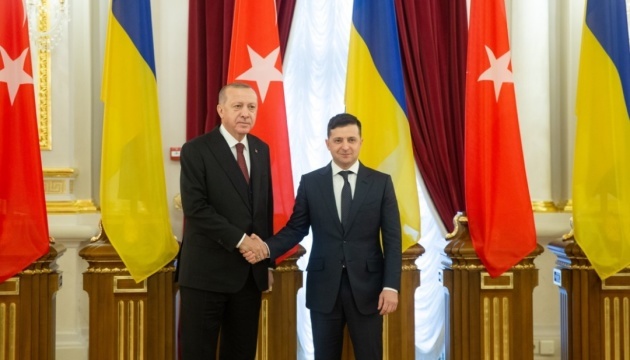 The US President Joe Biden’s 24 April message in which he used the word “genocide” caused an expected irritation in Turkey. Following this message, almost the entire Turkish intelligentsia, both experts and non-experts on 1915 events and international relations, began discussing Biden’s motivations and the possible repercussions of his message. Meanwhile, the reaction of the Turkish civil society has been harsher than that of the government, which displayed a calculated rather than a red-hot response. In such a context, however, one development in Turkey’s northern neighbor Ukraine escaped the attention it deserves. This neglected development was Ukraine’s Minister of Interior Arsen Avakov’s statement published on 24 April with the title “Remembrance Day for the Victims of the Armenian Genocide. I Take Your Pain.”

Minister Avakov’s statement is essentially a sentimental rhetoric that replicates clichés. In this sense, it is hardly an interesting and essential read. However, significance of this statement cannot be ignored for the simple fact that its author is not a private person, but a minister in the Ukrainian government. Yet, this is not all about Avakov’s statement.

In this statement, Minister Avakov proclaims the importance of the recognition of the ‘Armenian genocide’ by Ukraine “at the state level.” This clearly means that a member of the Ukrainian government publicly advocates the implementation of an antagonistic policy against Turkey, which will unquestionably shatter the positive trend in Turkey-Ukraine relations. For this reason, the political meaning of Minister Avakov’s statement cannot be overstated. Yet, there is even more to that. What is more important than Minister Avakov’s statement per se is the fact that his advocacy of the ‘recognition of the Armenian genocide’ is not a singular example; there is a ‘history’ of such attempts that starts from 2013. For this reason, the ‘Armenian question’ in Ukraine calls for careful examination. In fact, such an examination unveils quite striking facts and connections that also help us understand the reasons of the ‘allure’ of the 1915 events for some politicians and public figures in Ukraine and in other countries.

In order to make a precise examination, it should be based on a right conceptual basis. Therefore, it should be made clear straightaway that third countries’ positions on the ‘Armenian question,’ in essence, is not a question of history, values or even law, but a question of both domestic and international politics. In this sense, Ukraine is no exception. Therefore, starting our examination on the ‘Armenian question’ in Ukraine with a brief overview of the relations between Turkey and Ukraine would be accurate.

‘Strategic Partnership’ between Turkey and Ukraine

The relations between Turkey and Ukraine were reestablished in 1991-1992 with the collapse of the Soviet Union after an approximately seventy-year long interval. In the 2000s, several mechanisms covering the Black Sea brought the two countries together in multilateral formats such as the BLACKSEAFOR, Black Sea Harmony, and BlackSea Synergy. In this period, the signing of the “Joint Action Plan between the Government of the Republic of Turkey and the Cabinet of Ministers of Ukraine on Enhanced Cooperation” was an important development. Yet, despite these, there was no significant breakthrough in the bilateral relation in these years. In brief, though since early 1990s, there had not been any major problems between the two countries and despite some important initiatives, up until 2014-2016, bilateral relations had not reached the level that the significance and potentiality of these neighbors in the Wider Black Sea region entail. The ‘strategic partnership’ established in 2011, too, did not result in a significant improvement in this regard.

The decisive breakthrough came in February-March 2014 following the Russian occupation and illegal annexation of Crimea, and then in November 2015 when Turkey downed a Russian warplane on the Turkey-Syria border. These two incidents have been the moments that notably altered Ukraine’s approach to Turkey and latter’s place in former’s security and foreign policy calculations. Though the heydays were over approximately by the summer of 2016, since then, relations between the two countries have improved greatly owing to responsible, rational, and farsighted approaches of the policy makers in both sides.

To understand the state of post-2014 Turkey-Ukraine relations, the annual foreign policy reports published by Ukraine Prism since 2015 provide important insights. According to these reports, starting from 2016, Ukraine has performed better in its relations with Turkey than its overall foreign policy performance. The year 2020 was the most successful year in this connection; whereas Ukraine Prism gave a B- for the overall foreign policy performance of Ukraine, it gave an A- for Ukraine’s relations with Turkey. In brief, Turkey has been one of the countries that Ukraine has managed to establish its best relations, although it is still not possible to speak about a truly ‘strategic partnership’ between the two countries.

In recent years, one of the most consequential developments in Turkey-Ukraine relations have been the initiatives on cooperation in the field of defense industry for the strategic nature of cooperation in this field. Today, besides Turkey’s sale of high-tech weapon system such as UAVs, their joint production is on the table. As to developments in this field, it is quite telling that so-called Quadriga meetings have begun in December 2020 that periodically bring the ministers of defense and foreign affairs of the two countries together.

Apparently, these latest developments have caused concerns in Moscow, which can be seen not only in the statements of the Kremlin bureaucrats but in the commentaries of the Kremlin-friendly Russian analysts and public figures. The fact that some Russian media outlets have begun calling the Russian-made Lancet drones “Bayraktar killer” demonstrates these concerns about the developments in Turkish defense industry and the cooperation between Turkey and Ukraine in this field.

The latest display of the positive agenda between Turkey and Ukraine is Ukrainian President Volodymyr Zelensky’s visit to Turkey on 10 April for the 9th meeting of the High-Level Strategic Council between Turkey and Ukraine. Significantly, this meeting took place during the critical days of the recent escalation between Ukraine and Russia, which made almost everyone speak of the possibility of a war between the two. What is also significant is that following this meeting, a 20-Article joint declaration was issued, the wording and several articles of which are worth highlighting.

Article 3 of the declaration announces Turkey’s “unconditional support to the territorial integrity and sovereignty of Ukraine within its internationally recognized borders.” Article 4, meanwhile, reads as follows:

“Continue coordinating steps aimed at restoring territorial integrity of Ukraine within its internationally recognized borders, in particular at de-occupation of the Autonomous Republic of Crimea and the city of Sevastopol, as well as territories in the Donetsk and Luhansk regions,” (emphasis added).

This article is important for not only affirming Turkey’s support to Ukraine in its conflict with Russia, but also frames the former as an active proponent of the Ukrainian position. The expression of “coordinating steps” even makes one think whether Turkey situates itself as a party of the conflict.

The Article 9 is also noteworthy for specifically mentioning Turkey’s stance on the peaceful settlement of the Donbas conflict for the fact that, whereas Turkey has always voiced its support to Ukraine with respect to the occupation and illegal annexation of Crimea, it has been relatively less vociferous with respect to Donbas conflict. Accordingly, this article could be read as a strong message to both Ukraine and Russia at the height of the latest escalation between Ukraine and Russia. Likewise, Articles 1 and 13 that underline cooperation in the defense industry could be read in the same way. Last but not least, Article 14 emphasizes Turkey’s support to Ukraine’s NATO membership, while Article 15 states “Reiterate support to regional cooperation in the Black Sea region in order to ensure stability and security, through bilateral and multilateral mechanisms, including NATO,” (emphasis added). Given that Turkey has been traditionally reluctant about military presence of non-littoral states in the Black Sea, this article is quite a positive gesture to Ukraine. All in all, it seems that at a time when Ukraine has felt itself under existential threat, Turkey did not abstain from exhibiting its strong support to its ‘strategic partner,’ while running the risk of Russian retribution, which indeed, came sooner than later.

To wrap up, particularly in the last seven years, a quite promising win-win relationship between Turkey and Ukraine has been developing by rational, farsighted, and good-willed policy makers on both sides. Since 2014, despite its ongoing and arguably deepening relations with Russia, Turkey has been a consistent supporter of Ukraine’s sovereignty and territorial integrity in the international arena. Ukraine, too, acts as a decent partner that does its best to sustain positive relations between the two countries, in spite of its dislike of the unfolding of Turkey-Russia relations. It can be seen that both sides act wisely and manage to find common grounds for their disagreements or at least not to turn them into estrangement. As a result, whereas this relationship provides Turkey a partner which is the third biggest country in the Wider Black Sea region that may help it to achieve some of its regional objectives, the same relationship provides Ukraine, first and foremost, a partner that may to a certain extent balance Russia in the region, hence help to strengthen its security.

As stated in the beginning of this article, third countries’ positions on the 1915 events, in spite of the ways in which they are presented, are determined by the political objectives. As such, they are also the expressions of third countries’ political attitudes towards Turkey. In addition, from a wider perspective, third country activities about this matter are also reflections of their political objectives in the regions around Turkey. To understand this point, even the answer of the simple question of “why did the US President chose April 2021 as the time to use to word ‘genocide’ to define the 1915 Events and not any other time?” would be sufficient.

Speaking of questions, another curious question that should be asked is; “why are certain political figures in Ukraine bringing a certain characterization of the 1915 events to the agenda?” The answer to this question lies in domestic politics and foreign affairs of Ukraine, which are pretty much intertwined. Examining the political careers of the people behind the ‘Armenian question’ in Ukraine tells a lot about the politics of ‘Armenian genocide’ in this country. For that, we should take a look at who these people are in our next article.