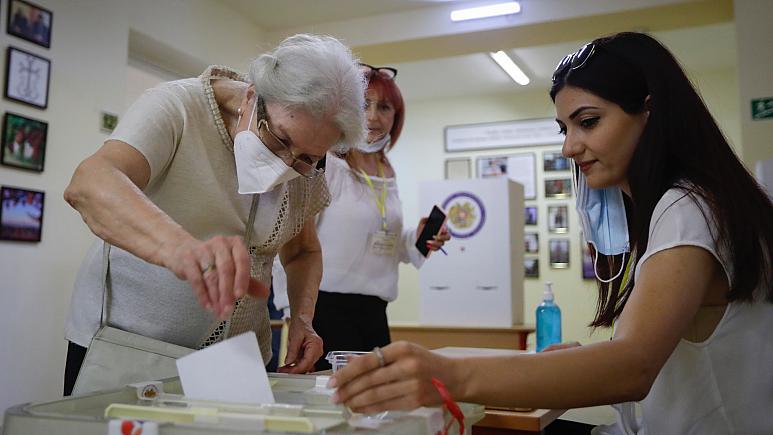 Armenia had been submerged into political uncertainty and tension since the onset of the 2020 Karabakh War (also referred to as the Second Karabakh War or 44-Day War) in August 2020 and the following defeat acknowledged on 9 November by the signing of the Russia-brokered ceasefire. Since then, a fierce struggle has been going on between Prime Minister Nikol Pashinyan (resigned from prime ministry on 25 April 2021) and his Civil Contract Party, and the opposition that was almost exclusively formed by the so-called old elite, which had lost power in the country as a result of the Velvet Revolution in the spring of 2018. The snap parliamentary elections on 20 June that resulted with the victory of the Pashinyan’s Civil Contract Party has ended this state of ambiguity and strain, at least temporarily.

According to media sources, Civil Contract Party received some 54% of the votes, whereas the second party, Armenia Alliance (consisting of the Armenian Revolutionary Federation-Dashnaksutyun and the Reborn Armenia Party led by Robert Kocharyan, the former President of Armenia between 1998 and 2008, who is also the prime ministerial candidate of the Alliance) won 21%. Next came I Have Honor Alliance/I’m Honored Alliance (consisting of the Republican Party of Armenia of the former presidents Robert Kocharyan and Serzh Sargsyan and the Homeland Party whose prime ministerial candidate was Artur Vanetsyan, the former head of Armenia’s National Security Service) with 5% of the votes. The other twenty-three parties and alliances won insignificant percentages. As such, Civil Contract Party scored a manifest electoral victory with quite a significant margin. Although Armenia Alliance declared that it will not recognize the results of the elections until the alleged irregularities during the voting are cleared, observers confirm that though some violations indeed happened, these were not as significant to result in the questioning of the election results. Hence, we may securely state that the 2021 snap elections have been finalized by the victory of the Civil Contract Party of Pashinyan.

The Armenian defeat at the 2020 Karabakh War came when Pashinyan and his Civil Contract Party was at power. After the war, the opposition pressed for Pashiyan’s replacement by another figure to lead an interim government until the next elections. Pashinyan successfully resisted that demand, which would have meant the formation of a government without elections. This maximalist demand was revised and snap-elections were called for by the opposition. Pashinyan agreed with this request and announced snap-elections on 18 March. About a month later, on 25 April, he resigned from his position as prime minister and the Parliament was dissolved on 10 May to pave way to elections in June.

Throughout some eight-month period after the signing of the 9 November Ceasefire, the Armenian political sphere was sharply divided into two camps between Pashinyan and his opponents. In such a context, Pashinyan was left without any allies, whereas others formed an anti-Pashinyan camp. Importantly, the anti-Pashinyan camp even included former rivals such as former presidents Levon Ter Petrosyan, Serzh Sargsyan, and Robert Kocharyan.

The political propaganda of the two camps were also as sharp. Both sides did not hesitate to use insulting rhetoric against each other. In such a context, ‘treason’ and similar accusations became ordinary.  Some radical sections of the opposition even called for the violent overthrow of Pashinyan if he refused to resign. This situation demonstrates that the same old political game in Armenia is still in play and no new and constructive approach to politics that embarks on rational argumentation is on the horizon.

One can say that the electoral victory of the Civil Contract Party (hence Pashinyan) with a significant margin just some eight months after a major military defeat during Pashinyan’s tenure in the office is the proclamation of the death of the old elite in Armenia that was already on life support in political terms. Put differently, the 2021 snap parliamentary elections attest that the old elite in Armenia is now officially dead in political terms. After this moment, it can be quite confidently argued that these political players will never be able to rise as a significant political force in Armenia.

The record number of parties and alliances that took part in the elections is notable. As mentioned, a total of twenty-six parties and alliances competed in the elections. This number was eleven in the previous parliamentary elections of 9 December 2018. The inflation of the parties/alliances demonstrate that despite forming an anti-Pashinyan camp, the opposition failed to form a truly unified front. Rather, in the 2021 snap parliamentary elections, we witnessed an ever more fragmented political sphere in Armenia. Whether these parties/alliances will survive after the elections is up for debate. Most probably, many of them will not or will turn into mere signboard parties/alliances without any base or content. The votes they have gained clearly indicate this likelihood. As such, it can be argued that the recent elections do not signal to the birth of a promising new political force in Armenia.

In contrast to the irrational, irresponsible, epic, and provocative rhetoric and actions of the Armenian political class, the Armenian public mostly kept its relative calm. No major social disturbances broke out in the aftermath of the 2020 Karabakh War. Eventually, on 20 June, Armenian voters went to the polls to make their democratic choices. These demonstrate the relative political maturity of the Armenian people particularly in comparison with the politicians. It can be seen that Armenians have internalized the basics of democracy in the last thirty years since Armenia regained its independence.

Having said that, however, one should also be mindful about other possible reasons of the calm among the Armenians. In fact, the attitude of the Armenians is shaped by various reasons and dynamics. One of these is the apathy resulting from the frustration felt by outcome of the war. Misled by the ungrounded nationalist propaganda and the hegemonic national narrative, Armenians truly believed that the Armenian army could never be defeated by the Azerbaijani forces. This confidence was dramatically shattered on 9 November 2020. The defeat led Armenians to seek explanations, which in turn resulted in pointing out scapegoats rather than realistic explanations. As usual, ‘genocidal Turkey’ has become the main scapegoat. This irrationality reached such a level that one could even have thought that the 2020 Karabakh War was fought between Armenia and Turkey if s/he has read only Armenian traditional and social media. Besides that, the blame game also led to the feeling of being abandoned by the West and betrayed by Russia, which also deepened the sense of despair. Seeing no promising and reliable political force to pull the country out from its current state added to the gravity of the socio-political climate. In the end, Armenia entered into elections process as a society that is confused and without a hope of a breakthrough. That is probably one of the reasons why the voter turnout was a little less than 50%, though disinterest in the elections has been an ongoing trend in the country for the last couple of years.