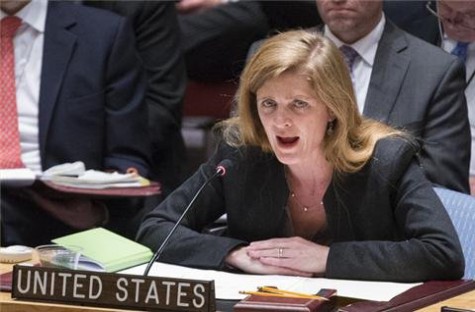 The US has accused Russia of orchestrating ongoing separatist violence in Ukraine, as Kiev said it was preparing a "full-scale" operation against pro-Russian forces which have overrun municipalities in several eastern cities.

The US representative, Samantha Power, told an emergency meeting of the UN Security Council on Monday that the seizure of buildings in several of the country's eastern cities mirrored Russia's "invasion" of Crimea.


"You have heard these last weeks Russia disclaim any intention of occupying or invading," Power said. "Unfortunately, the fact is that the armed seizure of buildings in six eastern Ukrainian towns yesterday, and several more today, mirrors the tactics Russian forces used in the early stages of the Crimea invasion," she said.


"The only entity in the area capable of these co-ordinated, professional military actions is Russia," Power said.


But Russia, which called the meeting, said it was "the West who will determine the opportunity to stop the civil war in Ukraine".


"There has already been bloodshed and a further escalation must be swiftly stopped," Vitaly Churkin, Russia's ambassador, told the council.


He added that "Kiev should stop the use of force against eastern Ukrainian people and start a genuine dialogue."


The emergency session was the 10th round of UNSC talks on the crisis and came after Kiev threatened to launch a military operation against pro-Russian forces unless they stood down.


Oscar Fernandez Taranco, the UN assistant secretary-general for political affairs, said on Sunday that at least one Ukrainian officer had been killed in a gun battle, and numerous other people were injured during clashes in the country's east.


"The situation is therefore now more combustible than ever," Fernandez Taranco said, warning against a spillover of "potentially severe consequences".


Power said John Kerry, the US secretary of state, would participate in negotiations set down for April 17 in Geneva, but said Russia would have to explain the presence of 40,000 troops on Ukraine's border for the talks to be successful.


The troops are in addition to a further 25,000 stationed in the Crimea region, the UK told the UNSC meeting.

Russia has repeatedly denied that the troops stationed at the border have anything to do with the crisis in Ukraine.


"Those troops have been there for quite a while...they are exercising," Churkin said. "There is nothing extraordinary about the presence of those troops there."


Yuriy Sergeyev, Ukraine's ambassador to the UN, urged Russia to stand down and stop interfering in Ukraine's affairs after the UNSC meeting.


"We are trying to avoid any clashes," he said. "We do not want blood on our territory."


"The conflict is inspired from outside," Sergeyev said.