THE EUROPEAN UNION HAS COMPROMISED ITS FOUNDING PRINCIPLES DURING ITS 60TH ANNIVERSARY CELEBRATIONS
Commentary No : 2017 / 30
Mehmet Oğuzhan TULUN
06.04.2017
6 min read 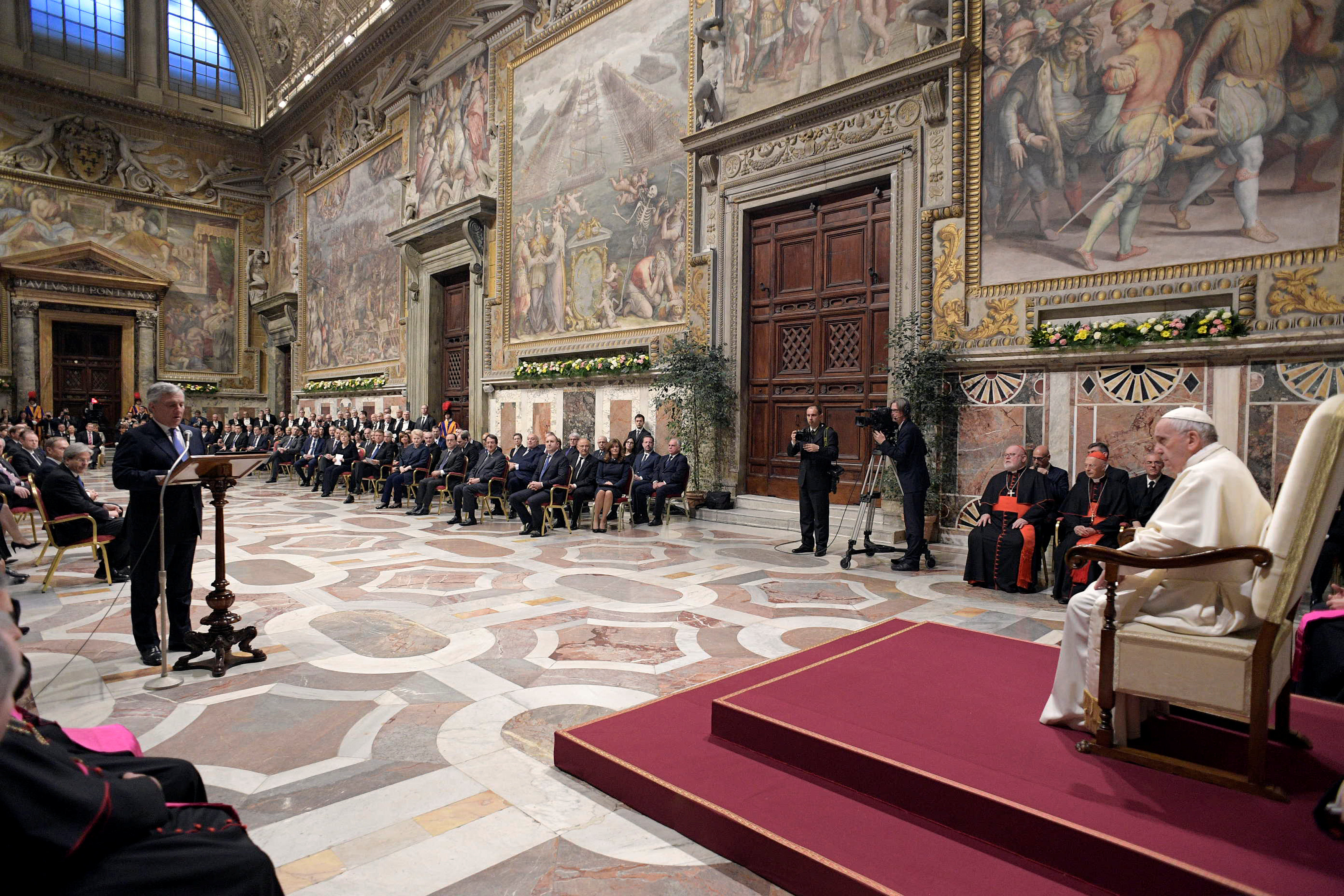 On 25 March, heads of states and governments of the European Union (EU) and senior EU officials came together in a summit in Rome to celebrate the 60th anniversary of the bloc’s foundation. A day before the summit, the said European leaders and EU officials visited Pope Francis, the spiritual leader of the Roman Catholic Church, in Vatican and held a meeting in the presence of the Pope.[1] Despite the fact that a week has passed since the meeting with the Pope, no publication that is critical of this meeting has been published in the European press. The only criticism for this meeting came from Turkey.

Before touching upon why this meeting should be criticized, it will be beneficial to briefly mention Pope Francis’ statements at the meeting.

On the occasion of the said meeting, Pope Francis put forth his opinions on the EU. While underlining that the “European civilization” had its roots in Christianity, Pope Francis emphasized that Europeans must be ready to embrace a multicultural life. The Pope also stated that populism and extremism were on the rise and that the EU was experiencing trouble in inspiring people with regards to European integration. Furthermore, Pope Francis stated that the EU will face the danger of collapse if the EU fails to provide leadership during the integration process and fails to cope with harmful political currents.

The following criticisms can be made against the EU leaders’ collective visit and meeting with Pope Francis:

The European Union, while respecting people’s religious beliefs and their freedom of worship, is a project built on secular principles. Therefore, by getting advice on European integration from Pope Francis (who is a figure that ultimately gains his prestige from being a religious official) and feeling to the need to get the Pope’s blessing for Europe[2], EU leaders have acted against the principles of the states and organizations that they represent. If they were so determined to collectively meet with religious leaders, for the sake of appearing secular, it would have been the proper behavior for them, for instance, to come together also with Muslim, Jewish, and other Christian sects’ religious leaders.

Pope Francis, besides being the spiritual leader of the Roman Catholic Church, is also the ruler of the Vatican City State, which is regarded as an absolute monarchy.[3] The fact that EU leaders attach importance to the advices of a figure who did not come to power via democratic principles and rules over his state with theocratic authority on the European Union (which is the common project of countries with democratic political systems) raises question marks. This situation reveals that EU leaders are distorting the European integration project. Statements by the Maltese Prime Minister Joseph Muscat at a meeting held within the framework of Malta’s current EU Presidency that praises the Pope’s political views raises concerns about the path the EU is heading towards. In his statement, Muscat said that the Pope Francis was an “ultimate world leader that has the skills and the vision to say things that transcend the obvious and banalities [referred by politicians]” and whose “insight will be extremely important for Europe’s future”.[4] With these words, Muscat virtually positioned the Pope, who lacks the experience to lead a democratic political system, above all European politicians.

None of the Pope’s statements on the European Union or the European integration are extraordinary. What the Pope has said are already known facts and the opinions he expressed are already matters of debate among the European public. Therefore, this meeting, while bearing no results other than the unnecessary glorification of the Pope and the Papacy, did not make any contribution with regard to the future of the European Union. Furthermore, the Pope’s comment that the “European civilization” had its roots in Christianity is far-fetched. First of all, the “European civilization” is a relative concept that is difficult to describe (for instance, in which period of history did the European civilization emerge?). Is it possible to talk about a “Europe” without considering the enlightenment that came with the discovery of Ancient Roman and Greek heritage and the works of first period Muslim scholars, the contributions of the Jews to the European culture or the centuries-long presence of the Ottoman Empire in Europe as the leading representative of Islam? Christianity is only one of the components of the complex history of Europe. Therefore, the Pope’s observations about Europe is neither innovative nor truthful.

Lastly, the meeting between the European leaders and the Pope, when paired with the European Union’s recent approach on certain matters, reveals the Union’s religion-based discriminatory attitude. For instance, despite all of its reform efforts, the EU still approaches Bosnia-Herzegovina’s EU candidacy with timidity. The EU, which for years has been in an effort to stall Turkey’s accession to the EU, is constantly creating excuses to avoid granting Turkey with visa liberalization, which is a requirement of the refugee deal signed between Turkey and the EU. This situation becomes even more striking when considering the fact that Georgia has been granted visa liberalization by the EU. Furthermore, Armenia, which is now completely in Russia’s orbit and chose to become a member of the Eurasian Economic Union, is nevertheless able to sign special agreements with the EU, is given promises of future membership to the EU, and is constantly presented with new opportunities to establish close relations with the EU. Even though it was recently announced that the EU will finally begin negotiations on a new partnership and cooperation agreement with Azerbaijan, another country in the Caucasus region, this development does not change the fact that relations with Armenia has been prioritized by the EU over Azerbaijan.

Taking into account all of these, Turkish politicians calling the EU a Christian club and accusing European countries of having a crusader mentality should come as no surprise.

[2] “Address Of His Holiness Pope Francis To The Heads Of State And Government Of The European Union In Italy For The Celebration Of The 60th Anniversary Of The Treaty Of Rome”, VaticanState.va – official website of the Vatican City State, 24.03.2017, http://w2.vatican.va/content/francesco/en/speeches/2017/march/documents/papa-francesco_20170324_capi-unione-europea.html