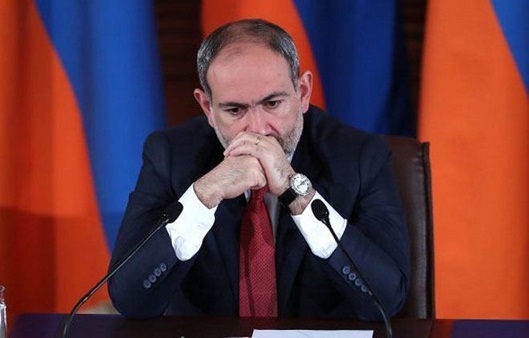 With the aim of ending the intensified clashes between Azerbaijan and Armenia due to the Nagorno-Karabakh conflict, an agreement was signed on 10 November 2020 between Azerbaijan, Armenia, and Russia. The articles of the Agreement has generated different outcomes and meanings for the related states. While this situation has been considered as a success for Azerbaijan and Russia, it has been the opposite for Armenia. For the Armenian people, Armenia ended up being defeated in the clashes which had lasted for six weeks in Nagorno-Karabakh and Armenian President Nikol Pashinyan, who signed the agreement within this framework, has been the subject of various insults and violent reactions. Ignoring the martial law banning demonstrations, thousands of angry protesters in the Freedom Square, which is located in the capital of the Armenia, collectively condemned Pashinyan and shouted slogans like “Nikol is a traitor” and “Nikol, get out” due to the Nagorno-Karabakh conflict[1].  While such an atmosphere is dominant in the capital, what will become of Pashinyan’s future in the country as a prime minister remains to be seen.

One of the reactions faced by Pashinyan after the step he took to end the Nagorno-Karabakh clashes came from the opposition parties in Armenia. 17 political parties jointly issued a statement requesting the resignation of Prime Minister Pashinyan. The party members of the opposition who called for the resignation have given the signals of the continuation of their protests on this issue[2]. When the mentioned opposition parties’ actions in this process is considered, a striking claim attracts attention. According to this, the Armenian intelligence service has claimed that it has prevented an assassination attempt against Prime Minister Pashinyan. It was stated that some opposition party leaders and members who are claimed to be directly related with the incident were taken into custody[3]. In short, it would not be erroneous to suggest that a political lobby has formed within the Armenian state that is opposing the continuation of Pashinyan’s presidency.

While referring to the reactions of the political actors, the statements of the Armenian President Armen Sarkissian should be mentioned as well. President Sarkissian, who stated that he was not informed about the agreement on ending the war in Nagorno-Karabakh and that he learned the agreement from the Russian media, used expressions that signified that the decision was taken without comprehensive consultations and discussions[4]. He also expressed the overwhelming majority of his political counterparts were in agreement about Armenian Prime Minister Pashinyan’s resignation or his removal from the office, and for holding early election as stipulated by the Constitution.[5] Apparently, the Agreement signed for the Nagorno-Karabakh conflict was not responded positively or supported by Sarkissian either. Furthermore, this agreement that has been accepted as defeat has brought about the possibility of early elections with it. The following statement by Sarkissian is striking; “We have no other duty but to strengthen our country… Only through unity we will be able to straighten our backs that have bent under the burden of defeat, to present ourselves and future generations and the world community as the children of a nation that is impossible to defeat.”[6] Sarkissian frequently emphasized the country’s armed forces during his speech. Accordingly, while Pashinyan is under the criticisms of fanatical circles, Sarkissian has implied that Armenia should “be ready for an another war”, which would serve to strengthen radical activities that have taken place in Armenia recently.

When we consider the non-political actors in Armenia providing massive participation to the demonstrations about the Agreement that was signed, we witness thousands of Armenian citizens protesting and marching to the Prime Minister’s residency and the seat of the government. These protests were delivered to large masses via social media and have turned into violent action. Even though Pashinyan, in response to the acts of violence, delivered a statement that “we have to stand shoulder to shoulder in these hard times”[7], this has not softened the atmosphere created by the public belief that “Armenia has accepted defeat”. The result from these developments it that Pashinyan is confronted with a serious opposition that has been formed by both political actors and citizens.

With the Agreement that went into effect on 10 November, it will be beneficial to mention Russia’s attitude towards the situation since it has consolidated its military and strategic dominance in the region. It can be said that Russia, which has engaged in meditation in this conflict, has close bonds with both Azerbaijan and Armenia. However, Armenia’s attitude towards Russia has been that Russia did not provide the necessary support to Armenia. The Russian Presidential Press Secretary Dimitry Peskov, who rejected these complaints by Armenia, expressed that Russia has good relations with Azerbaijan, but that Russia stands by Armenia at the same time. Furthermore, he expressed that the solution formulas for the Karabakh conflict between Armenia and Azerbaijan had been presented before, and had those solution formulas been implemented, there would not have been a new war and many people as such would not have lost their lives[8]. President of Russia Vladimir Putin’s statements supporting Peskov has demonstrated that Russia is satisfied with the agreement. According to Putin’s explanations, “with regard to international law, Karabakh has always been an inseparable part of Azerbaijan.” Furthermore, Putin stated that the necessary environment was provided for the signing of this agreement in October, yet Pashinyan refused it and hundreds of people thus lost their lives in the subsequent process. Putin, adding that similar results will be experienced if Armenia violates the agreement, called on Armenia to abide by the said agreement[9]. Those explanations show that Pashinyan, being afraid of reactions from the opposition, may have made a timing mistake on the way to the ceasefire. The distanced and criticizing attitude on this issue by Russia, which is the key military ally and economic partner of Armenia, means that the Pashinyan government, which is already under internal political pressure, is now under extarne political pressure as well.

While mentioning the different fanatical reactions in Armenia concerning the 2020 Karabakh War, considering the Armenian Diaspora’s importance for Armenia, it is necessary to refer to the fanatical reactions in the Diaspora as well. In this sense, it would be appropriate to touch upon two songs about the Nagorno-Karabakh clashes by world-famous Armenian American rock band “System of a Down”. The songs titled “Protect the Land” and “Genocidal Humonoidz” were released before the signing of the agreement on 10 November, and shared via Facebook by the group’s Armenian soloist Seri Tankian and also via the group’s official YouTube channel. In a statement made by the group, it was declared that “We mentioned Karabakh and Armenia in our songs. We expect support. The donations will be used for the people in need and soldiers in Karabakh and Armenia.” However, the video and the lyrics of the “Protect the Land” song places Armenia in the position of the victim in a propagandist manner while blaming and condemning Azerbaijan and Turkey. Meanwhile, there are racist connotations against Turks in the lyrics of the “Genocidal Humonoidz” song.  As a result, when considering the audience of the System of a Down and especially the psychological impact this group could have on younger generations, it can be thought that various perceptions will be created with these songs by appealing to the emotions of people, and as a result, people will be provoked and feelings of hatred will be created in them. It would not be surprising for the group to release new songs that contain reactions against Turkey and Azerbaijan in the coming processes.

When the current situation is reviewed, it can be seen that the deeds of the fanatic groups that have acted after the declaration of the 10 November Agreement have made the situation more complicated. One of the main reasons for the protests in Armenia is that the control of regions taken back by the Azerbaijan Armed Forces during the clashes will remain with Azerbaijan. This includes Susha, the second largest city of Nagorno-Karabakh that was taken back near the end of the clashes by Azerbaijan.[10] In this framework, the protests emphasizing territorial losses might constitute the social and political basis of a new war that could cause the loss of more innocent people. Along with this, the continuation of domestic turmoil in Armenia may create instabilities and unrest, which would further weaken the country in the international arena. Therefore, it cannot be anticipated that a favorable result for Armenia may come out of the protest atmosphere fueled by the actions of various groups, communities, or individuals with extremist views. A destructive war took place between the parties and the 10 November Agreement has been designed around the present consequences of the war. It is not surprising that Armenia, which lost the war and had no justifications in accordance with the international law, has encountered hard truths at the diplomacy table.

**This the English translation of a Turkish-language article that was published by AVİM on 25 November 2020. To view the original article, please click: https://www.avim.org.tr/tr/Yorum/2020-DAGLIK-KARABAG-SAVASININ-ERMENISTAN-VE-DIASPORADAKI-YANSIMALARI