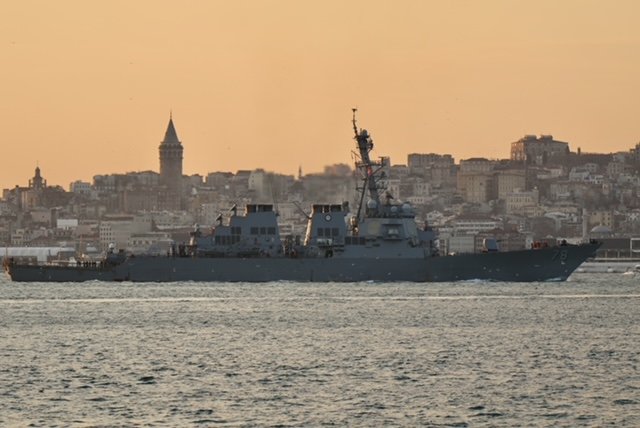 On 28 January, a week after the inauguration of Joe Biden as the 46th president of the United States, the US destroyer USS Porter passed in the Black Sea to join the USS Donald Cook (destroyer) and USNS Laramie (replenishment oiler) to fulfil its routine patrol duty. Thereby, the US navy presence in the Black Sea reached its highest level in the last three years. Russia reacted by activating its anti-ship defense system deployed in the occupied Crimea.

The official website of the U.S. Naval Forces Europe-Africa/ U.S. 6th Fleet stated that Porter joined the other two US vessels in Black Sea “to maintain maritime security alongside other NATO allies and partners.” The statement also read that “the ships’ combined operations further strengthen interoperability and demonstrate resolve to Black Sea peace and security.” The same website quoted the commanding officer of Porter stating “our continued commitment to security and stability in the region with our NATO Allies and partners” and stressing “strengthen[ing] interoperability and demonstrate[ing] resolve to Black Sea peace and security,” and “enhancing our combined readiness and naval capability.” Captain Joseph Gagliano, the commander of the Task Force 65 that Porter is assigned to was cited saying “we maintain control of the sea by drawing from the best capabilities of the NATO alliance, and together we are guaranteeing stability in the Black Sea.”

As can be seen, the emphasis in the official website of the U.S. Naval Forces Europe-Africa/ U.S. 6th Fleet is on three points: Peace and stability, resolve, and cooperation with NATO allies and partners.

Here, the stress on cooperation with NATO allies and partners should be paid attention. In recent years, many US strategists are discussing the revitalization of US-led multilateral mechanisms and alliances that, they believe, have been ignored by the Trump administration. In fact, the Biden administration is expected to return the US to its traditional foreign policy prioritizing these in order to secure the continuation of US supremacy and global leadership.

As regards to NATO’s eastern flank encompassing the Black Sea region, this perspective necessitates the US to find ways to resolve its disagreements with Turkey, though has been overlooked, a NATO member country with the second largest armed forces in the alliance and one of the two significant military powers in the Black Sea region.

Certainly, this is not a one way obligation; Turkey, too, needs to put more effort on this endeavor. Arguably, a good start for Turkey would be to find better ways to clarify its perspectives about several issues of contention between itself and its allies, including the US. With respect to Black Sea security, Turkey needs to be able to explain why it envisions Black Sea as an area of cooperation among the regional countries, rather than a geopolitical military frontline. Furthermore, Turkey needs to elaborate how this could be realized, for which a good starting point could be BSEC established back in 1992 with its secretariat in Istanbul.

Alas, looking at different analyses published lately, it seems that US planners continue their negligence about Turkey. That is to say, while deliberating on Black Sea security, most of the US analysts regard Romania as the key NATO ally, although military strength and capability of that country is still at a very low level, despite its increasing investments in recent years. In addition, the US analysts discuss the ways in which Ukraine and Georgia, as NATO partners, could play a role for the same objective. They do so in a way that makes the reader think that they have already forgotten that Turkey exists in this region, although the obvious reason for this is not short memory but the aforementioned difference of vision between Turkey and the US.

Perhaps, such neglect vis-à-vis Turkey indisposes Turkish analysts from striving to find solutions to disagreements and common grounds between US and Turkish views that may facilitate more functional and operational cooperation for “peace and stability” in the Black Sea. Even, some disheartened Turks become more predisposed to revisit the pillars of the traditional Turkish foreign policy and to evaluate different prospects in this sphere.

As mentioned, the Biden administration has just begun its term with a vision to revitalize of multilateral mechanisms and alliances. Within this policy framework, President Biden may choose to reassess US-Turkey relations with the objective of setting right the relations between Turkey and US, which would increase the capacity of the NATO in its eastern flank covering Black Sea, as well  as Eastern Mediterranean.