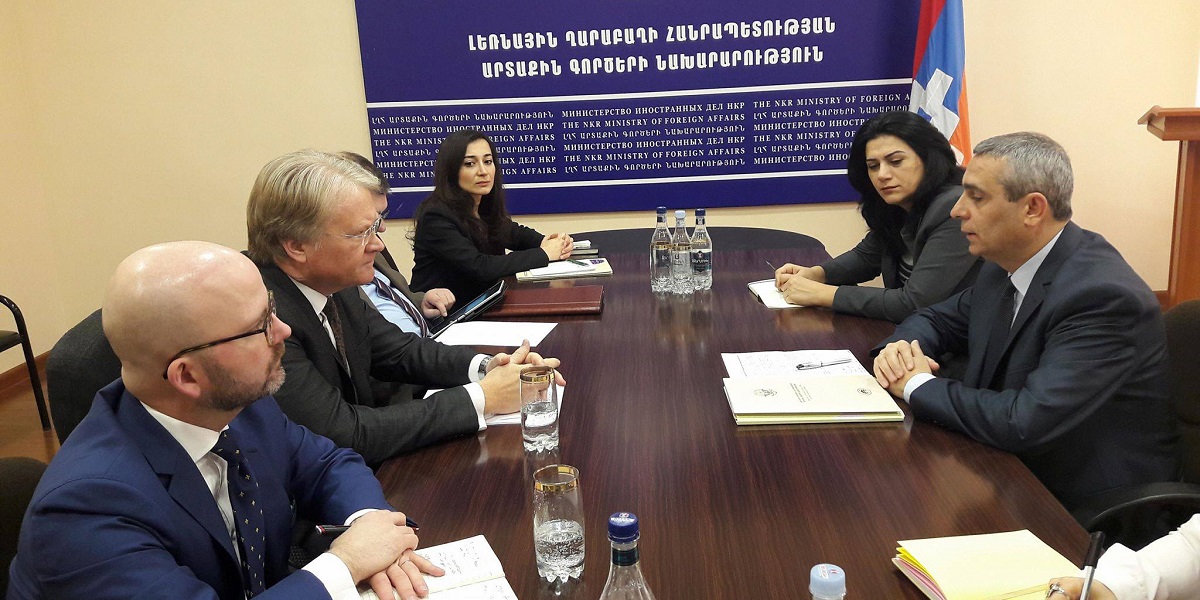 It was announced on the website of the “The European Armenian Federation for Justice and Democracy (EAFJD” that Member of the European Parliament Lars Adaktusson from Sweden and his chief of staff Charlie Weimers were on a “fact-finding mission” in Nagorno-Karabakh on 26th January 2018. The visit was reflected on the website of the EAFDJ and in the Armenian press with the title “Swedish Member of the European Parliament is on a fact-finding mission in Artsakh/Nagorno-Karabakh”. The EAFDJ presents itself as “a grassroots organization, representing the European citizens of Armenian origin” and asserts that “it is the main interlocutor promoting the Armenian issues in the European Union and international organizations, such as the Council of Europe and the OSCE”.[1]

The above portrayal of the visit by Mr. Lars Adaktusson to Karabagh as a “fact-finding mission” is a flagrant distortion of the internationally agreed meaning of the “fact-finding mission”. Also more importantly this portrayal represents a presentation of an illegal visit by a member of the European Parliament to a region of the Republic of Azerbaijan which is under occupation. It should be remembered that sovereignty and territorial integrity of Azerbaijan is reaffirmed by number of UN Security Council resolutions.

UN Declaration on Fact-finding in the Field of the Maintenance of International Peace and Security states that “fact-finding means any activity designed to obtain detailed knowledge of the relevant facts of any dispute or situation” and further elaborates that “Fact-finding should be comprehensive, objective, impartial and timely”.[2] EU common guidelines on (Joint) Fact Finding Missions describes fact-finding as “A special project or extraordinary process in which an impartial team or panel travels to the Country of Origin or third country to investigate or obtain information from local sources”   and describes  Fact Finding Delegation as “The group or body of delegates chosen to undertake a fact finding mission”.[3] As it can be understood from these internationally recognized definitions, presenting visit of Mr. Lars Adaktusson to Karabagh as a “fact-finding mission” is not only a total misrepresentation but at the same time a deceptive propaganda in its essence.

In the light of foregoing, visit of Mr. Lars Adaktusson to Karabagh deserves to be considered as a personal visit by a Swedish member of the European Parliament on private reasons. However, even the personal and private character of this visit cannot clear Mr. Lars Adaktusson from charges related to why he acted the way he did and why he did not mention even a word about the nature of the conflict,  about the Azerbaijanis who lost their lives in the hands of those so-called authorities which arranged and most probably financed this visit ? Questions in this respect might be multiplied. For example, is he objective and impartial as mentioned in the EU common guidelines on (Joint) Fact Finding Missions and UN Declaration on Fact-finding?

It is interesting that while there is a mention to his visit to Erivan in the corresponding period, no similar mention was recorded concerning his Karabagh visit in the personal Facebook of Mr. Lars Adaktusson.[4] This omission might be attributed to the illegal character of the visit which violated the domestic laws of the Republic of Azerbaijan as well as the international law.

According to “The European Armenian Federation for Justice and Democracy (EAFJD” website Mr. Lars Adaktusson (EPP) will co-host an event on 27 February, 2018, from 16:00 – 18:00 at the European Parliament, in room A5E1 with the title “Remedial Secession in Theory and Practice: The case of Nagorno Karabakh (Artsakh) “. It is asserted in the announcement that “the status of the negotiations, and recommendations for achieving a peaceful resolution in Nagorno Karabakh “Artsakh” is intended to be examined in the event. It is an unforunate fact that such personal and guided initiatives will undermine the international efforts for the peaceful settlement of the Armenia-Azerbaijan Nagorno-Karabakh conflict.