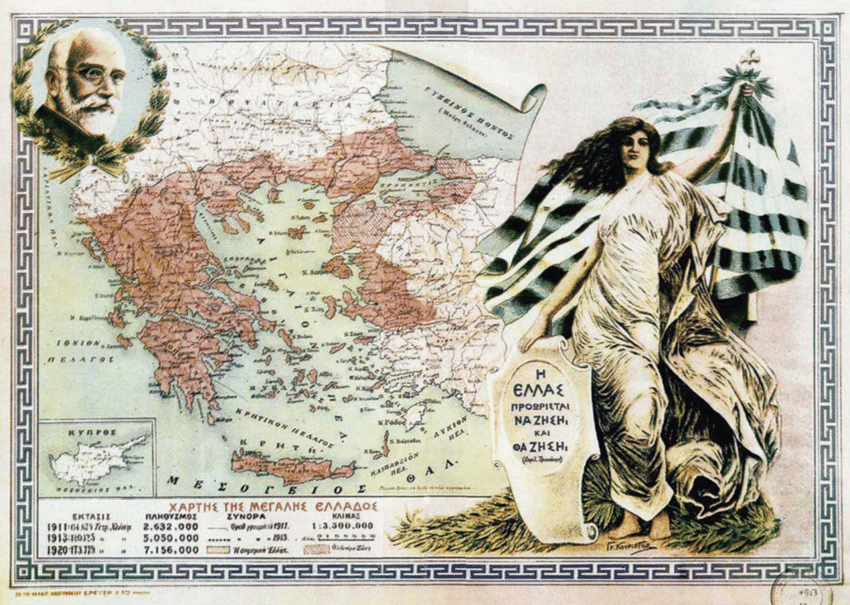 It has been reported in media that the spokesperson of the Greek Government Stelios Petsas recently stated that Athens would never agree to withdraw its troops from the Aegean islands and cited as alibi the existence of the Turkish Aegean Army. As per reports, the spokesperson also claimed that Greece has the "natural right" to militarize the islands for self-defense under Article 51 of the UN Charter [1].

The Greek Government Spokesperson, through this statement, clearly and officially admits the militarization of Aegean islands in contravention of the provisions of the Lausanne Peace Treaty. These remarks of the Spokesperson of the Greek Government is a statement that could have serious consequences in the context of international law especially in relation to the Eastern Aegean Islands.

The Eastern Aegean Islands are demilitarized under Article 13 of the Lausanne Peace Treaty. Pursuant to said Article, Greece cannot have naval base and establish fortifications in the islands. The Greek military forces in the said islands are limited to the normal contingent called up for military service, which can be trained on the spot, as well as to a force of gendarmerie and police in proportion to the force of gendarmerie and police existing in the whole of the Greek territory.[2]  Recent statement of the Greek Government Spokesperson can be considered as a revelation that the extent and posture of the Greek military forces on the islands are well exceeding permitted levels.

It should be kept in mind that there is a direct linkage between the possession of sovereignty over those islands and their demilitarized status. Demilitarization is the essential precondition of Greek sovereignty over these islands.  Greece, in this respect, cannot unilaterally reverse this status under any pretext. In this sense militarization of these islands in contravention of the relevant provisions of the Lausanne Peace Treaty amounts to “material breach” of the mentioned treaty since the demilitarization provisions are essential to the accomplishment of the object or purpose of the treaty.

For the Eastern Mediterranean Islands, “material breach” of the Treaty provisions relating to “demilitarization” can be considered within the context of the Article 60 of the 1969 Vienna Convention on the Law of Treaties which enables the suspension of the certain provision as a consequence of its breach.  According to the said Article, a material breach of a multilateral treaty by one of the parties entitles a party specially affected by the breach to invoke it as a ground for suspending the operation of the relevant part of the treaty in the relations between itself and the defaulting State. In the context of the mentioned Article, material breach is considered, among others, as the “the violation of a provision essential to the accomplishment of the object or purpose of the treaty”[3].

It should be mentioned in this context that no international document has even implicitly given Greece the right to militarize the islands in question. Besides that except for the circumstances stated in the United Nations Charter, the principle of self-defense cannot be arbitrarily evoked.[4] As for the Aegean Army of Turkey, it should be underlined that contrary to the status of the Eastern Aegean Islands, the Turkish territories of the Aegean region are not under any demilitarized status.

As noted above, the demilitarization provisions are essential to the accomplishment of the purpose of the 1923 Lausanne Peace Treaty. In this context, it is worthwhile to remember how İsmet Pasha as head of the Turkish Delegation explained the Turkish views on 25 November 1922 in the Territorial and Military Commission of the Lausanne Conference regarding the sovereignty and demilitarization of the said islands. He said in this respect that “The Aegean islands, which depended geographically on Asia Minor, were of great importance for the peace and security of Anatolia.” İsmet Pasha, while once more stressing the “vital importance from the point of view of the security of Turkey” of these islands stated that “The imperialist designs of Greece on Anatolia, which had recently been revealed to whole world had shown Turkey how dangerous it was for the security of Asia Minor that these islands should be owned by a country like a Greece which artificially created on her own soil aspirations towards the establishment of a Greek Empire in Asia Minor.” As a result, the Turkish Delegation, in the mentioned Lausanne Conference commission meeting, underlined that it is “necessary in the interests of general peace that an undertaking be given for the complete demilitarization of these islands” [5].

At this point it should be mentioned that demilitarization provisions of the Lausanne Peace Treaty are not limited to Eastern Aegean Islands. According to Article 24 of the Lausanne Peace Treaty, a separate Convention was signed for the Thracian border.[6] The Convention bears the title of “Convention respecting the Thracian Frontier, signed at Lausanne, July 24, 1923”. Article 1 of the Convention stipulates that “From the Aegean Sea to the Black Sea the territories extending on both sides of the frontiers separating Turkey from Bulgaria and from Greece shall be demilitarized to a depth of about 30 kilometers.” The said article enlists the geographic details of this demilitarized zone, and other articles explains the nature of demilitarization [7]. The demilitarized zone on the side of Greek territory extends up until the Cape Makri (the village of Makri) which includes important port city of Dedeağaç (Dedeagatch/Alexandroupoli). This is an area where the current US Ambassador to Greece Geoffrey R. Pyatt has made recently a press conference on 23 July, 2020 on the occasion of the “The arrival of elements of the 101st Combat Aviation Brigade onboard Endurance” and  “the first use of the Port of Alexandroupoli for transshipment of equipment by the U.S. Army” [8]. It should be mentioned that this region is an area of which demilitarization provision was extensively discussed during the Lausanne Peace Treaty negotiations with the participation of Bulgarian delegation on the issue of access to the Dedeağaç port [9].

As per the assessments of academic sources, the demilitarized zones in Thrace were abandoned by the Thessaloniki Agreement signed on 31 July 1938 between the Balkan Entente countries (Greece, Romania, Turkey and Yugoslavia) and Bulgaria [10]. The Agreement was signed on behalf of the Balkan Entente by the  President of the Council of the Balkan Entente, Ioannis Metaxas, Prime Minister and Foreign Minister of Greece. It recognized “Bulgaria’s right of military equality which had been denied by the Neuilly Treaty” and “also renounced the demilitarized zones imposed on Turkey’s borders with Greece and Bulgaria by the Lausanne Treaty” [11]. According to our archive research, the said agreement was approved by Turkey with the Law No. 3553 on 4 January 1939, and published in Official Gazette on 12 January 1939, number 4109.[12]

As per the Dodecanese Islands, Turkey renounced in favor of Italy all rights and titles over the Dodecanese Islands to Italy of which were occupied by Italy after the outbreak of the war between Ottoman Empire and Italy over Libya in early 1912 in line with Article 15 of the Lausanne Treaty.[13] It should be mentioned that the Dodecanese Islands were ceded to Greece with Article 14(2) of the 1947 Paris Treaty of Peace between the Allied Powers and Italy on the explicit condition that they must remain demilitarized.[14] Greece was militarized also these islands, including the Meis (Castellorizzo) which only a Nautical Mile away of Turkey’s southern coast,  in contravention of the clear demilitarization provision of the 1947 Paris Treaty. This treaty is still in force and thus binding upon Greece.

In fact, the above mentioned Thessaloniki agreement sets an example of how the demilitarization provisions of a multilateral treaty can be lifted through mutual agreement. It should be kept in mind that the “material breach” of one of the basic articles of the any peace treaty might end up with an outcome that makes sovereignty over the islands mentioned in the corresponding article of the treaties which their provisions materially breached, questionable. In the light of the foregoing, it is to be emphasized that demilitarization clauses are sine quo non for the Aegean status quo. Trying to replace this status quo with faits accomplis is equivalent to opening Pandora’s Box which is to be carefully avoided.

[2] Lausanne Peace Treaty , ARTICLE 13. With a view to ensuring the maintenance of peace, the Greek Government undertakes to observe the following restrictions in the islands of Mytilene, Chios, Samos and Nikaria: (I) No naval base and no fortification will be established in the said islands. (2) Greek military aircraft will be forbidden to fly over the territory of the Anatolian coast. Reciprocally, the Turkish Government will forbid their military aircraft to fly over the said islands. (3) The Greek military forces in the said islands will be limited to the normal contingent called up for military service, which can be trained on the spot, as well as to a force of gendarmerie and police in proportion to the force of gendarmerie and police existing in the whole of the Greek territory. “Constituent Treaties: The Treaty of Lausanne” (Republic of Turkey Ministry of Foreign Afairs, 2011), http://www.mfa.gov.tr/sub.tr.mfa?1a37f3af-1499-4dbb-96f4-d0f17f490bb1http://ua.mfa.gov.tr/detay.aspx?88

[4] UN Charter Article 51: Nothing in the present Charter shall impair the inherent right of individual or collective self-defense if an armed attack occurs against a Member of the United Nations, until the Security Council has taken the measures necessary to maintain international peace and security. Measures taken by Members in the exercise of this right of self-defense shall be immediately reported to the Security Council and shall not in any way affect the authority and responsibility of the Security Council under the present Charter to take at any time such action as it deems necessary in order to maintain or restore international peace and security “Charter Of The  United Nations And Statute  Of The International  Court  Of Justice” (United Nations, 1945), https://treaties.un.org/doc/Publication/CTC/uncharter-all-lang.pdf.

[6] Article 24 of the Lausanne Peace Treaty.: “The separate Convention signed this day respecting the regime for the frontier described in Article 2 of the present Treaty will have equal force and effect in so far as the present High Contracting Parties are concerned as if it formed part of the present Treaty”. “Empire Britannique, France, Italie, Japon, Grece, &c., et Turquie: Traite de Paix,  Signe a Lausanne Le 24 Juillet 1923” (United Nations, 1924), 27, https://treaties.un.org/doc/Publication/UNTS/LON/Volume%2028/v28.pdf.

[13] Article 15 of the Lausanne Treaty: “Turkey renounces in favour of Italy all rights and title over the following islands: Stampalia (Astrapalia), Rhodes (Rhodos), Calki. (Kharki), Scaipanto, Casos (Casso), Piscopis (Tilos), Misiros (Nisyros), Calimnos (Kalymnos), Leros, Patmos, Lipsos (Lipso), Simi (Symi), and Cos (Kos), which are now occupied by Italy, and the islets dependent thereon, and also over the island of Castellorizzo (see Map No. 2).”“Constituent Treaties: The Treaty of Lausanne.”

2. These islands shall be and shall remain demilitarized.

3. The procedure and the technical conditions governing the transfer of these islands to Greece will be determined by agreement between the Governments of the United Kingdom and Greece and arrangements shall be made for the withdrawal of foreign troops not later than 90 days from the coming into force of the present Treaty.“Treaty of Peace with Italy. Signed at Paris, on 10 February 1947” (United Nations, February 10, 1947), VOLUME 49 1950 I. N* 747, https://treaties.un.org/doc/publication/unts/volume%2049/v49.pdf.