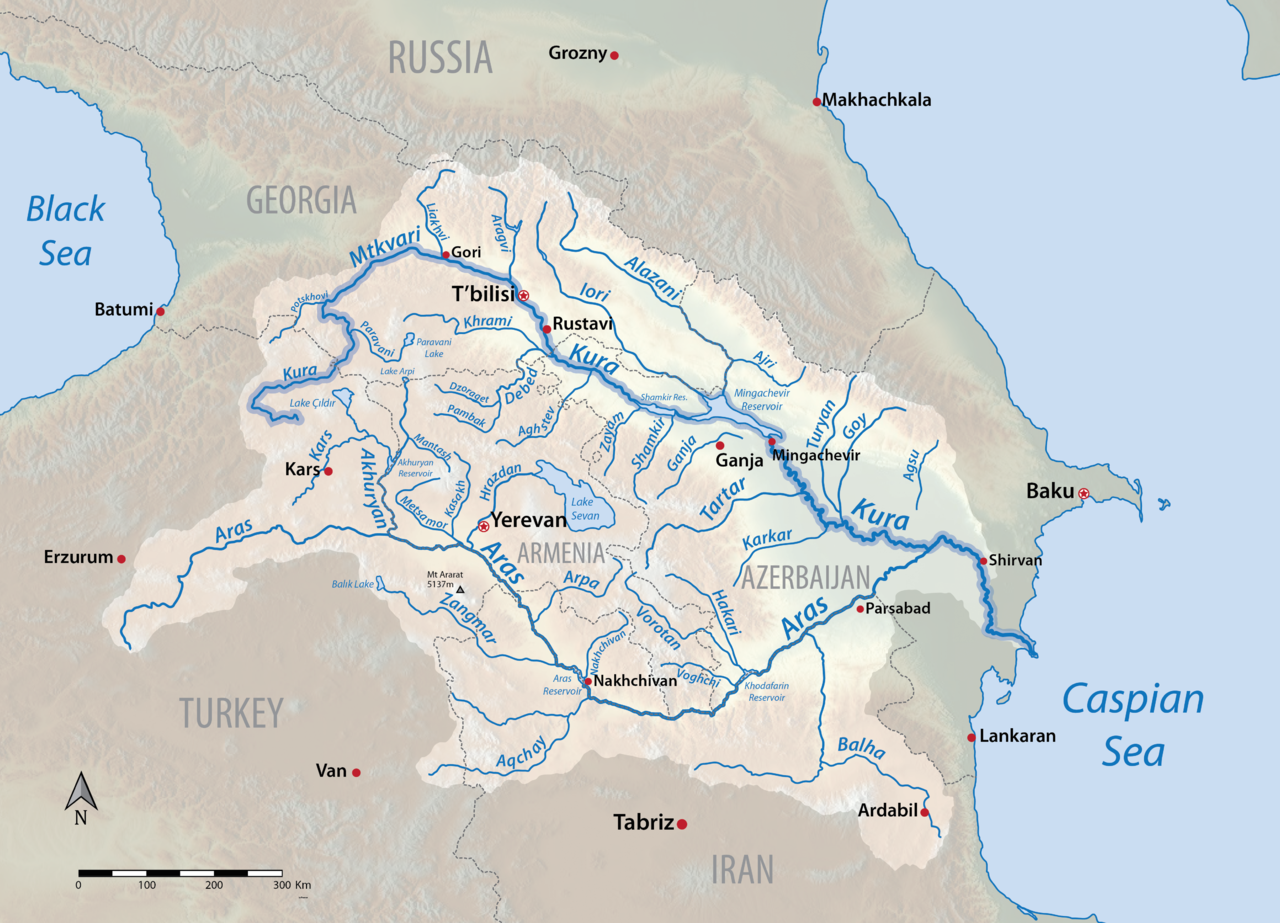 After the second half of the 1990s, the effects of global warming began to be discussed more frequently, and due to the increasing temperatures and declining rainfall on a yearly basis, the available water resources began to gradually decrease. This situation has led to an increase in disputes between states over the use of available resources.

For instance, after the drying up of 90 percent of the Aral Sea following the year 1986, one of the most important water sources in the region, water disputes have begun to arise between the Central Asian countries which have arid and semi-arid climates. As one may recall, a one-day clash occurred between Kyrgyzstan and Uzbekistan in 2021 due to the water issue.[1] In fact, the lack of communication and cooperation between the countries of the region due to demographic disagreements and border disputes are influential in the water issue turning into a chronic problem.

As for the Caucasus, it is a region located in the basin where the Aras and Kura rivers meet. A significant portion of the Aras and Kura rivers originating in Turkey flow through the South Caucasus and extend to Iran. 31.5% of the basin is located in Azerbaijan, 18.2% is in Georgia, 15.7% is in Armenia, 19.5% is in Iran, and 15.1% is located within the borders of Turkey. Therefore, for these two rivers that fall into the category of transboundary waters, issues related to water management in the region individually concern Azerbaijan, Armenia, Georgia, Turkey, and Iran. However, to date, the Nagorno-Karabakh conflict between Armenia and Azerbaijan has disrupted the process of water management in the region. The lack of cooperation between the countries of the region due to the conflict between the two countries has led to an uncontrolled increase of problems such as pollution and the ineffective use of water resources. However, Azerbaijan’s regaining the control of its occupied territories with the Nagorno-Karabakh war that occurred in 2020, has opened a new door of opportunity for regional cooperation.

In this context, firstly, it is worthwhile to briefly look at what transboundary waters are and the different perspectives on the management of these waters.

The formation of societies as states and the establishment of their boundaries over time result in different parts of some streams, such as their sources, beds and tributaries, to fall under the sovereignty of different countries.[2] Initially utilized only in terms of transportation needs, the perception of watercourses, as a result of increasing needs and changing perspectives, later evolved into a different aspect that includes the subjects of the management of limited resources and the use of waters. These issues have at times been the subject of interstate disputes since they are closely related to the sovereign territories of the states. For this reason, it has proved necessary to determine the situation of the transboundary waters and to make several legal regulations regarding the status of the countries sharing the same bodies of water.

Although determining the nature of the body of water is one of the first steps, there are also two different categories of interest in this context: international waters and transboundary waters.

The definition of a riparian state carries importance here. Simply put, all states sharing transboundary water or streams qualified as boundary waters are called riparian states. However, considering the stream’s direction of flow, a distinction is made between the “upper (source) states” and the “lower states”.[3] The upper riparian state is a country where the source of the stream is located. Nevertheless, today, there is no international legal arrangement approved by all countries concerning the transboundary and boundary waters. There is the 1997 Convention on the Law of the Non-Navigational Uses of International Watercourses, signed by a small number of countries within the UN framework. However, many countries are not a party to this agreement, and many of the signatories have also stipulated many reservations concerning the agreement.[4] Therefore, water issues between countries are sought to be resolved within the framework of customary law, bilateral agreements, and political bargains.[5] The doctrines adopted by the riparian countries during this process are influential.

The Doctrine of Absolute Sovereignty (the Harmon Doctrine): According to this doctrine, a state bears no responsibility for the lower riparian states for its actions concerning the part of the transboundary water that remains in its territory.

The Doctrine of Superiority of First Use: This doctrine is based mainly on prioritizing the utilization activities that one riparian state-initiated before the other. It deems this as an acquired right of the riparian state which started utilizing the water source earlier.

It is known that Turkey, though not a party to the Convention, also adopts the principle of equitable and reasonable utilization in its water policies.[7] For example, although it is not a party to the 1997 UN Convention, it has adopted this principle in relation to the use of the waters of Euphrates-Tigris. However, as complementary to this principle, the idea has been put forward that the ''principle of optimal use'' may be considered.[8] Turkey’s proposal on this issue has been a “three-stage plan”. The first stage involves making an inventory of countries' water resources. It has been envisaged to receive information such as precipitation, snow thickness, temperature, evaporation percentage with monthly meteorological data and to make calculations accordingly. In the second stage, it has been requested to make a quantitative and qualitative inventory of soil resources, that is, to calculate needs such as irrigation and washing water. The last stage involves the construction of facilities that will ensure the irrigation of fertile soil with the available water and the designing of appropriate irrigation systems.[9]

Another area of application in which Turkey has adopted the principle of equitable and reasonable utilization is the Arpachay boundary water that flows along the borders with Armenia. During the Soviet Union period, an agreement was concluded on how to use the waters of Arpachay located on the border between Soviet Armenia and Turkey. In line with this agreement, a joint dam was built on Arpachay and both states were allowed to use the water of the dam for irrigation purposes. Both parties would be permitted to build a hydroelectric power station in their own territory, however, as a matter of principle, neither of them would harm the interests of the other party. After the dam was built, it was stated that each party could withdraw the water share they have from the accumulated water in the reservoir and the water coming directly from the Aras River, as well as from any portion of the Arpachay and Aras rivers that form the border. To audit all these arrangements, it was also decided to establish a joint commission[10]. This agreement has been in effect even after the dissolution of the Soviet Union and the Republic of Armenia’s declaration of independence. Both countries continue to cooperate on this issue.

Similarly, a bilateral agreement was reached with Iran, another riparian state, on the use of the Karasu and Sarisu rivers in the Kura and Aras basins. Cooperation is carried out within the framework of hydropolitics maintained through bilateral agreements.

One of the reasons why Turkey has not signed the 1997 UN Convention is that, due to regional conditions, the principle of equitable and reasonable utilization cannot always be put into practice as determined by the framework conventions. It is argued that it is more feasible to establish effective mechanisms through bilateral agreements since each climate and stream has its own specific conditions. The fact that joint work can be carried out between Turkey and Armenia on the management of streams, which is a purely technical issue, even though the borders are closed and there are no direct diplomatic missions, shows that this argument is applicable. To date, there have been no serious water disputes between the two countries. Although some Armenian researchers have in recent years raised concerns about potential problems that may arise due to Turkey's hydroelectric power plant projects[11], according to the European Green Deal, these power plants are considered in the category of renewable energies.[12] The processes within the framework of mutual high-level technical cooperation have the potential to ensure that all riparian states can benefit from these resources. In this respect, the long-term cooperation between the two countries is a significant piece of evidence. It can serve as an example in terms of transboundary waters for the South Caucasus riparian states of Azerbaijan-Armenia and Georgia.

The Issue of the Management of Transboundary Waters in the Caucasus

In the South Caucasus region, which is in the Kura-Aras basin, there are water sources which are fed by tributaries of these rivers as well as rivers extending from Russia to the region. In terms of water resources, Georgia is the richest among the countries in the region. Azerbaijan, on the other hand, is the country that experiences the water problem the most due to drought and inconsistent rainfall.

Water management in the Kura-Aras basin is carried out through the bilateral agreements which were established in the Soviet Union period and include Turkey. There are joint commissions established on a bilateral basis that maintain the cooperation. However, there is no platform yet that can address the Aras-Kura basin as a whole and provide solutions to the common problems of the basin.[13] The increasing drought and inconsistent rainfall in the basin and the region in recent years concern all the countries situated in this basin. The first question that comes to mind when the water issue arises is whether there is a fault in the water policies of the source country. However, the need for all riparian states to act cooperatively in a basin that has many branches and is fed by various rivers, such as the Aras-Kura basin, became evident in the example of Aral Lake drying up.

When viewed from a bilateral standpoint, a joint project between Georgia and Armenia on the Debed-Khrami rivers was initiated in 2004. This project especially aims to prevent water pollution and to protect biodiversity by ensuring that resources remain clean.[14]

However, the lack of relations between Azerbaijan and Armenia due to the occupation that lasted for 30 years has also created a huge deficiency in terms of water security in the region. Azerbaijan is located on the delta where these rivers flow into the Caspian Sea. Therefore, poorly managed water resources become polluted and reach Azerbaijan. As a result, various epidemics sometimes occur in the clean water resources in Azerbaijan. Due to the ongoing occupation, the resources have been used in the southern basin of the Aras and Kura Rivers under the principles of de facto absolute sovereignty and/or superiority of first use for many years.

On the other hand, environmental organizations in Azerbaijan claim that, during the occupation of Karabakh, Armenia has dumped the waste of the Metsamor nuclear power plant from the Karabakh region into the rivers. Reports have been published in the press in recent months that chemical waste has been dumped from the Gajaran-Zangezur copper mine and Gafan Iron mines into the Okhchucay River.[15] Azerbaijan, which regained control of these regions after the Karabakh war in 2020, has started conducting tests on water resources in the region.

The new conjuncture that emerged after the war has created a new environment in which the countries of the region can more easily negotiate mutual problems and technical issues on water management on common ground. The improvement of relations between Azerbaijan and Armenia can also lead to progress in solving the water problem in the region.

[7] Ministry of Foreign Affairs of the Republic of Turkey, "Turkey's Policy on Water Issues," https://www.mfa.gov.tr/turkey_s-policy-on-water-issues.en.mfa