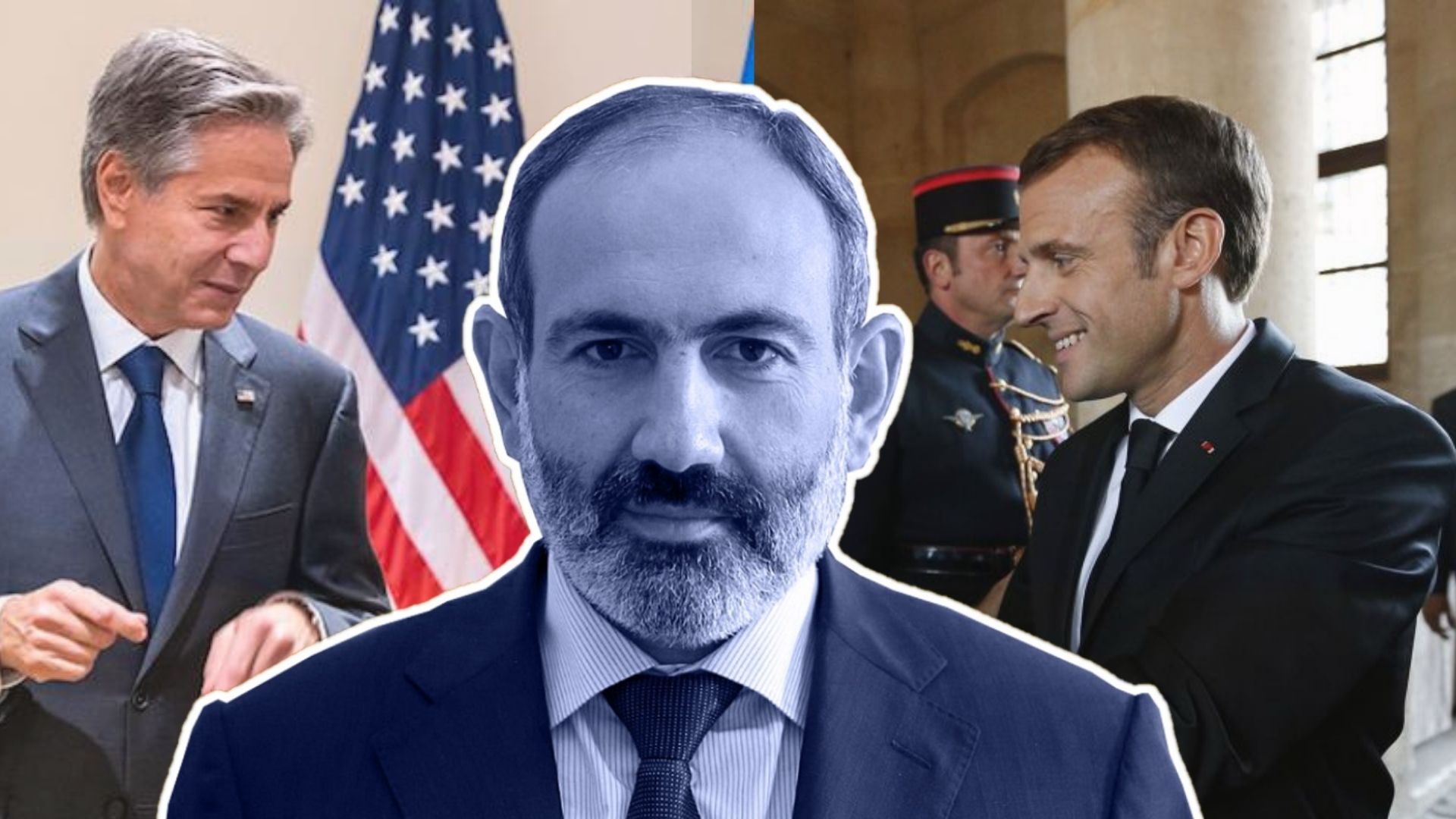 Last month, the tension between Azerbaijan and Armenia escalated once again and skirmishes took place between the two sides. This time, the focal points of the conflict were the border regions called Lachin, Kelbecer, Zengilan and Dashkesan rather than Karabakh. After three days of, a ceasefire was reached, and clashes were halted. However these latest developments generated a lot of interest in the international arena, as a result of Armenia’s attempts that were supported by the co-chairs of OSCE, France and the US, which were out of the equation in the region after 2020.

As is known, the process of signing a permanent peace agreement was initiated between the two countries after the Armenian occupation in 2020 ended. In this framework, the issue of determining borders became an agenda item of ever-increasing significance. Even though the borders of the former Soviet Azerbaijan constitute the new borders of the Republic of Azerbaijan, the regime of the borders was never fully established since Armenia occupied Karabakh and the 7 surrounding regions following the dissolution of the Soviet Union. Azerbaijan secured its borders by initiating the demarcation and delimitation process after the 2020 Karabakh war, when it regained control over its previously occupied territories. However these initiatives created small scale tensions between the two countries.[1] Within this context, it was decided to conduct efforts on the determining of the borders between the two parties under the leadership of Russia on 26 November 2021. Nevertheless, it was seen that the border commission, which was decided to be established before the end of the same year, could not be organized. With Russia’s attention shifting away from the Caucasian region following its attack on Ukraine, the course of the initiatives on delimitation of the border were significantly altered.

As of the end of 2021 and the beginning of 2022, the EU has risen to prominence as an actor in the demarcation attempts between the two countries. During the meeting held in Brussels between Charles Michel, President of the European Council, President of Azerbaijan Ilham Aliyev and Prime Minister of Armenia Nikol Pashinyan, it was emphasized that a consensus was reached once again on the establishment of a joint border demarcation commission between Armenia and Azerbaijan.[2] However, when no progress could be made regarding the border delimitation commission, Azerbaijan sent Armenia a five-article proposal in March, including the principles of mutual recognition of territorial integrity and acceptance of borders.[3] After Armenia announced that it accepted these principles in the presence of European Council President Michel, the work of the commission began following the second Brussels meeting. A meeting was held between the delegations of the two countries on 24 May, but no concrete outcome could be obtained after the meeting.[4]

While defeat in Karabakh in and of itself could not be easily recognized for the Armenian public opinion, the demarcation of the borders meant accepting the fact that Karabakh was completely lost.[5] For this reason, the back-and-forth negotiations have turned into tensions on the border from time to time. Finally, in August, during the meeting between the leaders of the EU, Azerbaijan and Armenia in Brussels, it was announced that concrete steps would be taken to establish a border commission. However, on 12-14 September, clashes broke out in some parts of the borderline between the two countries at 3 to 5 km-dept, in which mutual losses occured.

It is not difficult to understand the reason for Azerbaijan's determined stance concerning the border. After 30 years of occupation, it can be easily seen that Azerbaijan wants to establish security as soon as possible in the areas that it liberated. Armenia's delay in responding to Azerbaijan's insistent offers in this process and bringing the issue to the agenda of different channels seems to stem from its attempts to compensate its losses after 2020. On the other hand, the decreasing trust towards Russia in Armenia and the changes in the international conjuncture appear to have opened different doors of opportunity for both Armenia and the West.

As is known, Armenia is a country that is highly dependent on Russia economically, militarily and sociologically. It is also allied with Russia within the framework of the Collective Security Treaty Organization (CSTO). It was interpreted that these ties would become stronger especially following the events that occurred after 2020. However, when Russia, which believed that it had distanced countries such as the US and France from Armenia, waged war against Ukraine, it also led to some deficiencies in Russia’s influence in the Caucasus.

As a matter of fact, in the process that developed following the strained relations between Russia and the West, it was seen that Armenia continued its rapprochement with the US-EU and France. For example, as mentioned above, the EU started to involve itself in the process as a new actor with a balancing role against Russia after the Minsk group lost its efficacy. France, one of the co-chairs of the Minsk group, has not lost its influence in the region and has pushed forward its relations with Armenia from the state of "impartial co-chair" to the level of active supporter. At the end of 2021, the roadmap for economic cooperation between the two countries was mutually signed.[6] Subsequently, a bilateral defense cooperation agreement was then signed in June.[7] In the conflicts between Azerbaijan and Armenia, France essentially played its role as the voice of Armenia in the international arena. After the clashes in September, France even made the remarkable statement that it would bring the issue to the UN Security Council.[8] Another co-chair, the US, has been giving indications for a long time that it will expand its presence in the region. The US, which published a national strategy regarding Armenia in May, laid out the general framework of the relations to be established with Armenia in line with the goal of liberating Armenia from Russian influence after Russia's invasion of Ukraine. In this context, it was envisaged that some steps would be taken through USAID[9], such as helping to renew Armenia's infrastructure and taking initiatives to reduce its dependence on Russia in the field of energy. As a matter of fact, the nuclear energy cooperation agreement signed between the two countries was made in accordance with these goals.[10] Following the clashes in September, the visit of the Speaker of the US House of Representatives and on the third highest raking official in American politics,  Nancy Pelosi, to Armenia also clearly revealed the stance of the US regarding the presence in the region. Pelosi, similarly to the French leader, did not hesitate to express their full support for Armenia against Azerbaijan.

All these developments can be considered as a part of the West's policy of containing Russia through the US, France and the EU. It appears that the West, which was perceived to have been pushed out of the equation along with the Minsk Group and lost the course to Russia, has taken its seat at the negotiation table once again through the EU in response to the first crisis that broke out following the war in Ukraine and created problems in itself separately from the Karabakh issue. On the other hand the developments imply that the US and France will make projections regarding Armenia's direct ties with Russia, unlike the role they have previously assumed.

In such a conjuncture, it is understood that Armenia wants to set back the peace agreement with Azerbaijan as much as possible. Armenia, which relied on the support of Russia in the years when it occupied Karabakh, seems to seeking to obtain gains this time with the support of the West. It appears that there is consideration for support to be given to Armenia in order to win over a country that is a member of the CSTO, hosts a Russian military base in the easternmost flank of NATO, and borders Iran. For this reason, with regards to the conflicts on the border, the West is aiming to create the image to the public opinion of Armenia as the nation being attacked, just like Ukraine. Although they are diametrically opposite cases, the statements of the Ministry of Defense of Armenia are made by an official whose attire and manner of speaking are very similar to the Zelensky government officials. Even with this minor example, it seems that the Western public opinion is trying to affirm the perception that Armenia is the aggrieved party. On the other hand, Armenia, which believes that its peaceful and pro-western perception will be overshadowed by its alliance with Russia, is signaling that it can leave the CSTO, indicating one of the most important shifts in its foreign policy. Likewise, upon his return from the UN meeting, Prime Minister Pashinyan expressed his views on the contemplation of Armenia's withdrawal from the CSTO[11]. In fact, within the framework of NATO's Military Training Development Programme, Armenian Ministry of Defense officials also visited institutions providing training in the US for the purpose of training Armenian commanders.[12] Developments like these point out that there are important signs of a shift in the axis of Armenian foreign policy. The perception that Armenia was abandoned by the CSTO and Russia following the Karabakh and border conflicts has become increasingly widespread in the Armenian public opinion. The CSTO's response to the application it received during the last conflict, stating that a border violation can only be possible after the demarcation of the border, is interpreted in a completely different manner by the Armenian public opinion and administration.

Although it is not a short-term development for Armenia to cut ties with Russia suddenly, Armenia seems to be at the furthest point from Russia within its 31-year period of independence. Despite that Russia's war in Ukraine appears to have opened different doors of opportunity for the West and Armenia, it can be said that the window of opportunity for achieving peace in the South Caucasus is getting narrower.

[9] Samantha Power, who is the administrator of the USAID programme, is known for her affinity towards the Armenian lobbies in the US.  She includes baseless allegations regarding the Armenian claims in her book titled “A Problem from Hell: America and the Age of Genocide”.

[11] “CSTO ‘may withdraw from Armenia,’ according to PM Pashinyan,” The new voice of Ukraine, October 1st, 2022, https://english.nv.ua/nation/csto-may-withdraw-from-armenia-according-to-pm-pashinyan-50273873.html.