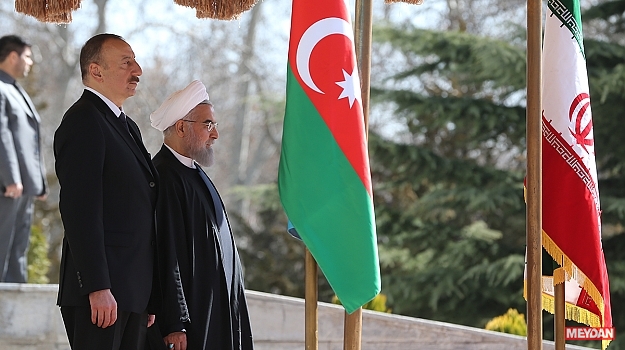 President of Azerbaijan Aliyev visited Tehran on 23rd of February upon President of Iran, Hassan Rouhani’s invitation. Iran and Azerbaijan signed several agreements covering mostly energy, transportation, culture and economy. In order to underline the importance of the agreements in terms of boosting regional cooperation Aliyev stated that “the essence of these documents is quite positive. One part of them will serve for bilateral relations and the other part – for multilateral and regional cooperation”.[1]

Considering the complicated relation between Azerbaijan and Iran, due to their historical ties, Azerbaijan’s close relations with Israel and Iran’s with Armenia, the visit can be taken as a signal of a new era on the relations between the two countries. “We want peace, harmony and cooperation in the region. Today, Iran and Azerbaijan play a stabilizing role in the region we live,” President Aliyev said.[2] Additionally supporting Aliyev’s position towards Iran, Deputy Prime Minister of Azerbaijan, Ali Ahmadov said “we want the traditional friendly relations between Iran and Azerbaijani to even more strengthen the economic and trade relations.”[3]

At the meetings, Aliyev and Rouhani particularly focused on energy, the need of transportation of energy resources and goods to Europe, and the benefits for both countries of the current transit routes going via Azerbaijan. The Southern Gas Corridor can create mutual benefits for both countries. Currently Iran and Azerbaijan already have special swap deals covering two regions; Iran’s northern provinces and Nakhichevan Autonomous Republic. Azerbaijan provides fuel to Iran’s northern provinces and Iran provides gas to Nakhichevan Autonomous Republic.[4]

The legal status of the Caspian Sea[5] was also on the agenda. With the Collapse of the Soviet Union, the legal status of the Caspian Sea remained as an unsolved issue held on the shelves in the last decade. Although there have been some positive developments, such as adoptation of the Framework Convention for the Protection of the Marine Environment of the Caspian Sea[6] by all 5 littoral countries as well as various bilateral and trilateral agreements among parties,  the discussion on the “legal status” has not been put on the table to be solved. Declaratively, at the meetings held in Tehran, both parties agreed on speeding up the process to solve the status of the sea. For instance, within the context of the reached agreements and talks, The State Oil Company of Azerbaijan (SOCAR), National Iranian Oil Company and Ghadir Investment Company might conduct joint exploration activities in the Caspian basin.[7]

North South Transport Corridor was also one of the agenda items. Both Iran and Azerbaijan have important geographical locations connecting Asia, Europe, Middle East and the Caucasus. This project links Astara (Azerbaijan) with Rasht and Qazvin (Iran)[8] and has a significant potential in terms of actualizing the long-pending projects promoting cooperation and trade among Russia, Azerbaijan and Iran. Implementation of the foreseen projects have already started. In December 2015, Azerbaijani Ministry of Economy and Industry declared that the first phase of the North-South railway corridor, connecting Azerbaijan and Iran, would be finalized before late 2016.[9]

Additional to the meeting with Rouhani, Aliyev also visited Leader of the Islamic Revolution Ayatollah Seyyed Ali Khamenei and exchanged ideas on the cultural and religious issues. While underlying the importance of cooperation between the two countries, Ayatollah Khamenei stated that “Political stability, security, calm and public welfare for people of Azerbaijan are very important for us and in the light of wholehearted understanding between the two nations, economic exchanges and cooperation in different sectors must increase,”[10] Azerbaijan with a Shii population, has been a significant example of good inter-religious relations accommodating both Shii, Sunni, Christian and Jewish populations within its territory. For the sake of conservation of the diversity, stability and peace in the region, it is vital to pursue such a balanced policy towards religious groups.

Following his visit to Tehran, Aliyev called Rouhani on 27th of February and both parties confirmed their determinations on continuing talks and boosting cooperation.

Considering the developments in the post-Nuclear deal, Eurasia seems to have come to the fore in the considerations of Iran. Latest agreements and the talks between Iran and Georgia, and then between Iran and Azerbaijan signals an increasing interest for regional cooperation particularly on energy deals, transportation corridors and trade as well as cultural affairs. Iran, already having good relations with Armenia, keeps the countries in the South Caucasus closer. Azerbaijan and Iran have the potentials to meet not only the region’s but also Europe’s energy demands via Georgia and Turkey. However, Iran is still yet to decide whether it wants to reach Georgia - and then Europe-  via Armenia or Azerbaijan. However taking Russia’s strong influence in Armenia into account, it would be less risky to continue the talks with Azerbaijan. The positive outcome of Aliyev’s visit might encourage actors to do so.

[5] There is no consensus on the legal status yet, some countries consider Caspian as a sea whereas some consider it as a Lake, or would like to adopt a special status

[6] Entered into force in 2006 and known as Tehran Convention, full text is available on: http://www.tehranconvention.org/spip.php?article4