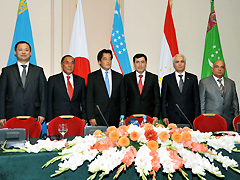 Dissolution of the Soviet Union had an impact on foreign policies of actors who are interested in the Eurasia region such as China, Japan, United States, European Union, Turkey and so on. Many of them developed new strategies and initiatives to engage with former Soviet Republics and integrate them into their markets, particularly in the fields of transportation and energy. For example, Japan established diplomatic relations with Central Asian countries in 1992 and adopted policies for the past 25 years accordingly. Recently, cooperation on energy such as  on nuclear energy and nuclear related issues, strengthening transportation infrastructures, aid programs and conducting periodic diplomatic talks are main pillars of Japan – Central Asian countries relations.

Japan has been investing in the region and developing ties with the Central Asian countries since the early 1990s. In that sense, Japanese leaders developed strategies in the late 1990s and underlined the importance of the region. Finally, in the framework of its foreign policy towards Central Asia, Japan established “Central Asia plus Japan” dialogue program in 2004 to continue the works on the Foreign Ministers level and interactions in a formal structure.[1] Framework of the program covers five main pillars aiming to promote cooperation; policy dialogue, intra-regional cooperation, business promotion, intellectual dialogue and cultural and people-to-people exchange.[2]  It is possible to say that via its foreign policy tools and investments, overall aim of Japan is to balance increasing influence of Russia and China in Central Asia. On the bilateral and regional levels, energy and infrastructure works are among the most important areas of cooperation for Japan – Central Asian countries.

Also, following the 9/11 attacks, Japan, as a pro-Western country that has strong ties with United States, realized the necessity of putting Afghanistan and Central Asia under the focus. It is vital to work with the countries in the region to have and sustain a peaceful environment. Therefore, Japan took more concrete steps accordingly.

In the field of energy, Japan is seeking for new partners as many other countries. Japan consumes 200 million tons of oil and 55 billion cubic meters of natural gas, and this number is expected to reach 100 billion cubic meters by 2020.[5] Main oil suppliers of Japan are Middle Eastern countries, followed by South East Asian countries and Russia with a very small amount. Considering the increasing demand on energy resources and the unstable situation in the Middle East, it is possible to say that Japan is also looking for alternative energy resources both to balance China’s influence in Central Asia and to diversify its options.

In that sense, it is important to analyze latest developments. For example, Japanese Prime Minister Shinzo Abe visited Central Asian countries and Mongolia in 2015, and his visit was concluded with the signing of several agreements on energy and infrastructure works worth approximately 45 billion US dollars.[6] Moreover, Japan invests in Turkmenistan, which is China’s important energy supplier, to build social infrastructure and facilities and to strengthen ties in the field of energy; Uzbekistan to build power plants to produce different kinds of energy resources and Kazakhstan to build nuclear power plants. Central Asian countries that lack energy resources also benefit from Japan’s support. Japan supports Tajikistan in the fields of agriculture and water facilities, and Kyrgyzstan to build highways[7] and to renew Manas Airport. In the upcoming years, we can expect Uzbekistan and Turkmenistan to be on Japan’s agenda with high priority.

Besides energy resources, rare-earth metals are of interest to Japan as well. China produces %93 of the world’s total and Japan is the bigger user of rare-earth metals.[8] However, because of the crisis on the disputed islands between the two countries, Japan is willing to reduce its dependence on China and consequently support Kazakhstan’s works on the rare-earth metals production.[9] According to a study, Second Secretary of the Embassy of Japan in Bishkek stated that “Japan does not look to Central Asia because of its oil and gas, but because of region’s rare earth metals”, drawing attention to the new area in which Japan is in need to diversify its resources.[10]

Another area of cooperation is related to security; nuclear non-proliferation.Cooperation in this particular field between both countries is a natural outcome considering the Fukushima accident and Kazakhstan’s experiences. In August 1991, Nursultan Nazabayev, President of Kazakhstan, ordered the closure of the Semipalatinsk site[11], which was the nuclear test site of the Soviet Union. Also it is important to recall that Kazakhstan was the first country to handover its nuclear weapons to Russia among all Commonwealth of Independent States.[12] Central Asian countries and Japan have similar understanding on this topic. In fact, with that perspective, in 2006 all the Central Asian parties signed The Central Asian Nuclear-Weapon-Free Zone Treaty (“the Treaty” or “the CANWFZ Treaty”) which came into force in 2009.[13]

Finally, considering the fact that Japan does not have direct connections with Central Asia, it considers and uses different options. Japan aligned itself with India in the framework of regional projects on regional connectivity and transportation corridors. Currently, there are three possible ways to connect Japan with Central Asia: Trans-Siberian Railway (TSR), China Land Bridge (CLB), and Turkmenistan-Iran’s Chabahar Port.[14] However, the first two options are losing their relative advantages and therefore, Chabahar port has gained importance for Japan. Chabahar port is located in the South-East of Iran, approximately 50-70 km away from Pakistan’s Gwadar port, which was constructed by China as an important pillar of China-Pakistan Economic Corridor (CPEC) which is worth around 46 billion US Dollars.[15] Japan, together with India, declared their intention to invest in Chabahar port and support the construction works of a regional logistic hub around the port.[16] Japan’s investments in Iran will be the main connector of Japan-Central Asia corridors, that also include two neighboring countries of Central Asia; Afghanistan and India. It can be argued that, as an alternative to  unlike China’s initiative, Japan is supporting works to establish a north-south corridor rather than east-west corridors.

Central Asia is a landlocked region with newly discovered economic potential, increasing population and a vast land area bordering Russia, China, Caspian basin, Iran and Afghanistan. Central Asian countries have been aligning themselves with different regional formations with various motivations which affected their policies and therefore, led theam  through economic and political transformations. Many regional initiatives were mostly welcomed since they presented opportunities to Central Asian countries to interact with the other countries and continents. For example; Russia adopted “near abroad” policies and tried to preserve its influence in the neighbor countries, therefore established the Eurasian Economic Union to cover the economic sphere and the Collective Security Treaty Organization for the military sphere for the sake of its own security concerns. The European Union developed different programs, but the one targeting to stretch transportation corridors towards China via Eurasia region is called Transport Corridor Europe-Caucasus-Asia (TRACECA) and this project has been on the agenda of the actors in the region and currently the most popular one is China-led One Belt One Road initiative. However the easiest and still intact initiative for the region won and is the Economic Cooperation Organization (ECO) founded by Pakistan, Iran and Turkey.

Yet, Japan does not have ambitious regional policies. Instead, Japan prefers to strengthen bilateral relations, particularly in the fields of transportation, industry and energy with concrete agreements and projects. In that sense, Japan’s policies and investments in Central Asia will eventually contribute to development of the region and balance the increasing role of other actors such as Russia and China and, open an access to the seas for Japan. In general, Japan favors capacity building projects with tangible outcomes and is cautious about comprehensive regional projects. Unlike China, Japan has not established regional formations that include Central Asian countries due to its different approach towards the region. For instance China, similar to Russia, has security concerns too. The main motivation behind the establishment of Shanghai Cooperation Organization, with the participation of Uzbekistan in 2001, is to secure China’s borders and fight against extremism. Nevertheless, promoting regional connectivity is a common ground for all the actors in the region.

[1] Turkmenistan has the observer status

[13] US Department of State, “Treaty on a Nuclear-Weapon-Free Zone in Central Asia and Protocols”, https://www.state.gov/t/isn/canwfz/