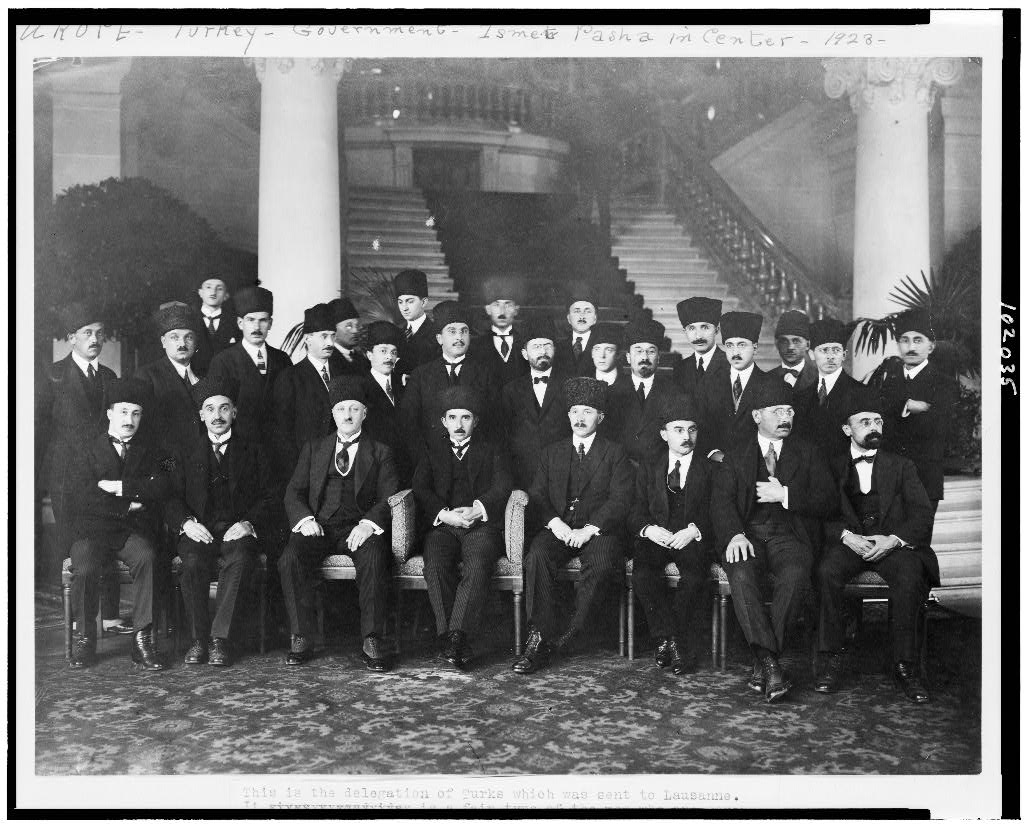 July 24th is the 93rd anniversary of the Peace Treaty of Lausanne (in this text, the “Lausanne Peace Treaty” will be referred to as the “Lausanne Treaty”). The Lausanne Treaty is an important international contract that was negotiated, signed, and ratified by almost all important participants of the First World War. It is not only a crucial treaty due to the identity of the participating countries, but it is also crucial due to the scope of subject areas it covers. It is a treaty that covers political, military, economic, and humanitarian issues that appertains to the Ottoman Empire and Eastern Front of the First World War.[1] It would not be farfetched to argue that it does not only effect the signatory countries, but has wide ranging ramifications for third countries. Any demands for revision, alteration, or termination of such a treaty must be met with utmost skepticism. This is especially valid for demands that are not based on any principle and rules mentioned in the treaty itself or that are contrary to the general principles of international law. Thus, any subjectively motivated claims regarding this treaty, including those of the Republic of Armenia and the Armenian diaspora rooted in the events of 1915 must be reviewed and evaluated on the basis of the above mentioned context.

It would appropriate to briefly outline the end results of the Conference. This is crucial due to the complex nature of the negotiations. The Conference has produced not one, but 18 related but separate documents (for the purposes of this text, these documents will be referred as “the Documents” with a capital D). The Final Act, which is in fact the 18th Document of the Conference, sheds light on the above mentioned intricate structure and lists the previous 17 Documents which were drawn up in the Conference. These 17 Documents and the Final Act (the 18th Document) together can be considered as a “package of Documents” decided on and signed at the Conference. Among these Documents, the first Document mentioned in the Final Act as “The Treaty of Peace signed on 24 July 1923” can be considered as having particular importance for all the signatories.[5]

It should be noted that, due to the complex nature of the negotiations, the status of the participating states and the number of documents that have been produced at the end of the Conference, the package of Documents is referred to by different names in different publications. “Lausanne Treaty”, “Treaty of Lausanne”, “Lausanne Peace Treaty” are among these terms. This text will use the “Lausanne Treaty” when referring to the package of Documents.

In order to better understand the nature and the content of the Conference, it might be useful briefly to refer to the Final Act since it explains competently the purpose of the conference. In the preamble of the Final Act it is stated that:

The Government of the British Empire, France and Italy, in agreement with the government of Japan, being desirous of finally re-establishing peace in the East, and having invited on the one hand Greece, Romania, the Serb-Croat-Sloven State, and also the United States of America, and on the other hand Turkey, to examine together the arrangements by which a result equally desired by all the nations might be achieved.

The events of 1915 were discussed in this framework. It should be mentioned that in the text of Lausanne Treaty, there are no direct references to Armenians. This is important, since the conflict in which the Armenians took a part in had been a preoccupation of the last period of Ottoman history.[6] Nor can one find a direct reference to Republic of Armenia in the Documents of the Conference. This does not, however, imply that the problems that had arisen after the events of 1915 have not been dealt with in the Conference. In fact, the problems that had arisen from the events of 1915 have actually been thoroughly dealt with both during the negotiation phase and also the text of the Lausanne Treaty.

One issue that had risen from the events of 1915 was regarding territorial demands. This was dealt with directly during the Conference. The representatives of the Allied Powers brought up this topic on several occasions. The Minorities Sub-commission meeting held on December 14 was one such occasion. The representatives of the Allied Powers wanted a detailed discussion on the matter of "A National Homeland for the Armenians" that would start the next day (December 15). The meeting on December 14, however, ended at an impasse.[7]

According to the minutes of the proceedings, the Turkish representative informed the Allied representatives that the Turkish delegation would not allow such a discussion to take place. The Allied representatives, comprising of British, French, and Italian members insisted on the discussions on this matter to go forward. They furthermore demanded that Turkey, instead of refusing to discuss the issue, should present counter arguments to convince the commission. The Turkish representative argued that the issue had been resolved in the prior treaties that were signed between the relevant states. What is referred to here are the following: Treaty of Alexandropol (1920), Treaty of Moscow (1921), and the Treaty of Kars (1921). The initial discussion for "A National Homeland for the Armenians" ended on December 18. In the draft proposal that was accepted as the basis of further negotiations, the question of Armenian homeland was not included.[8]

These attempts at directly including the Armenian delegation to the Lausanne Conference and issues arising from the events of 1915 yielded no result. By the end of the Conference, not only for Turkey, but also for the Allied Representatives, the subject matter of allocating territory for an Armenian homeland was considered closed.[10]

One of the issues that has been dealt with indirectly in the text of the Lausanne Treaty is about the future of displaced individuals as a result of the First World War. The Treaty ensures that no individual who had been displaced was left without a nationality (citizenship). The Treaty does this in two ways. In Article 30 of the Treaty the following is stated:

Turkish subjects habitually resident in territory which in accordance with the provisions of the present Treaty is detached from Turkey will become ipso facto, in the conditions laid down by the local law, nationals of the State to which such territory is transferred.[11]

It is further added in Article 31:

Article 31 states unequivocally that any individual who had acquired a new nationality at the signing of the Treaty would have the right to regain Turkish nationality.

A second issue that has been dealt with indirectly in the text of the Lausanne Treaty is about the immovable property of the displaced individuals. It is stated in Article 33:

Persons who have exercised the right to opt in accordance with the provisions of Article 31 and 32 must, within the succeeding twelve months, transfer their place of residence to the State for which they have opted. They will be entitled to retain their immovable property in the territory of the other State where they had their place of residence before exercising their right to opt…[13]

The issue of immovable property of the displaced individuals has been dealt with in the Amnesty Declaration (the 8th Document). In Article 6, it is stated that:

The Turkish Government which shares the desire for general peace with all the Powers, announces that it will not object to the measures implemented between 20 October 1918 and 20 November 1922, under the protection of the Allies, with the intention of bringing together again the families which were separated because of the war, and of returning possessions to their rightful owners.[14]

This article further states that these efforts by the Allied forces could hinder any individual from reapplying to the proper authorities regarding their ownership rights of their properties. According to the documents from the Archives of the USA, 644,900 Armenians had returned to the land that is now referred to as Turkey before the signing of the Lausanne Treaty. The number of properties returned to their owners had already reached 241,000 by 1919. This number correspondence to almost 98 per cent of the immovable properties.[15]

As it was stated previously, Lausanne Conference Documents in nowhere contain any provisions concerning the problems that have arisen due to the events of 1915. Nevertheless, the issue was thoroughly dealt with during the Conference. In the text of the Documents, problems that had arisen due to the events of 1915 have been dealt without making any specific reference to a particular ethnic or national group. This is important, since it does not place any particular group’s suffering above another group’s suffering. The problems that had arisen due to the events of 1915 had devastating effects on all the peoples of the region. This is a fact whether one belongs to the Muslim or Christian faith, or whether one was a Turk or Armenian. This is why the Conference and the Documents produced at the end of the Conference have such a crucial importance.

It should be underlined that the comprehensive system created by this Conference and the Documents closed all “the Questions of the Near East” that had stemmed from the First World War.

Turan, Ö. (2001). “The Armenian Question at the Lausanne Peace Talks”. In T. Ataöv (Ed.), The Armenians in the Late Ottoman Period (2 ed., pp. 207-239). Ankara: The Turkish Historical Society for The Council of Culture, Arts and Publications of the Grand National Assembly of Turkey.

[1] Aktan, The Lausanne Peace Treaty and the Armenian Question

[2] Lausanne Treaty was concluded within the framework of the Lausanne Conference.