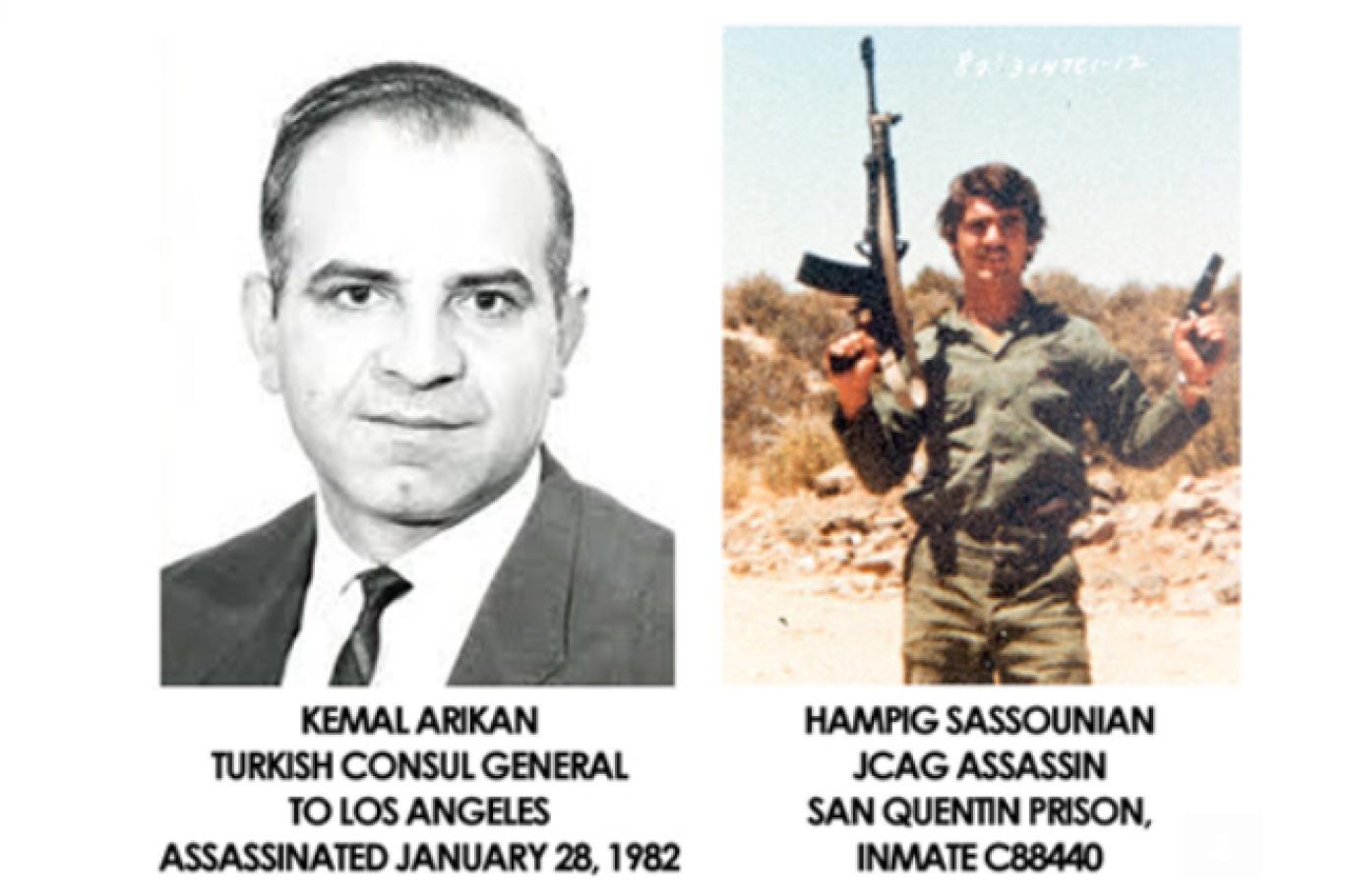 In the history of Turkish diplomacy, the period from the 1970’s to the 1990’s is commemorated by Armenian nationalists' terrorist organizations with assassinations of Turkish diplomats. Terrorist organizations such as ASALA and JCAG-ARA have killed a total of 58 Turkish citizens, 31 of whom are diplomatic officials, together with their families. After the attacks, some of the murder suspects of the diplomats have been arrested and some have not been captured to date.

One of the attacks was the assassination of Kemal Arıkan, Turkey's Los Angeles Consul, by Hampig Sasunyan and his accomplice Krikor Saliba on 28 January 1982. Although Sasunyan was arrested soon afterwards, his accomplice Saliba fled to Lebanon and no further information was obtained about him later. After the assasination, Arıkan's murder was claimed responsibility by the terrorist organization JCAG. Sasunyan was found guilty in the court and was sentenced to "life sentence without probation".

As stated in the articles of AVİM, Hampig Sasunyan started to apply for probation regularly since 2003, the 25th year of his conviction.[1] In 2006, 2010, 2013, 2015, 2016 and 2018 the probation requests were rejected with one exception, the request in 2016 was accepted by the the California Board of Parole Hearings and was sent to the Governor at that time, Jerry Brown, but it was rejected through the objection of Governor Brown. In 2018, the request for probation was dismissed by the board in consideration of Sasunyan "posing an unreasonable security risk for the society".[2] In 2019 December, the repeated probation application was accepted, and it was sent to the Governor once again.

The aspect that primarily striking is the claim that a person who has an “unreasonable security risk for the society” has improved significantly in two years. In 2016, it is seen that the Armenian nationalist extremist interest groups, which are taking advantage of the Turkish-US tension for their lobbying activities, could once again influence the California Department of Corrections Parole Board by taking advantage of the anti-Turkey atmosphere in the United States.

Moreover, support for Sasunyan has been continuing for a long time. Sasunyan's supporters have previously collected donations and carried out propaganda activities for the probation to take place.[3] The most recent example of this support is that Pastor Rafi Garabedian from the Western Armenian Church in the USA visited Sasunyan in prison in the recent months and then posted his pictures on the church's website. Thus, the support which is given to the killer Sasunyan, who has a certified terrorist, has gained a religious dimension.[4] Such as the state of California where the Armenian population is high, , the efforts to release someone who is supported through the Church reveals the extent of radical Armenian nationalism and the discourse based on Turkish hostility.

California Governor Gavin Newsom has a key position in the probation process. The probation request of the terrorist on 27 December 2019, which was approved by the California Department of Corrections Parole Board, was left to discretion of the governor’s after approximately a 120-day process and legal procedures. The Governor of California can object to the release decision within 30 days. At this point, Governor Newsom’s action at the end of this process will affect the Turks’ trust towards the country they are living in, which is the USA. A peremptory decision taken with the influence of interest groups who have taken advantage of the tension between Turkey-United States and current politics, will not only affect Turkish-US relations, but will, surely, affect the Turks living in the United States profoundly.

Undoubtedly, a decision on the release of Sasunyan may also lead to the questioning of the US as the country that conducts the most operations in the world since the early 2000s for the fight against terrorism. The definition of terrorism according to U.S. law; it is expressed as a politically planned movement of violence, conducted against non-combative targets and aimed at influencing the population.[5] In this case, the murder of Kemal Arıkan is also a terrorist crime according to the USA laws. A terrorist organization claimed responsibility for the action. Even if Sasunyan objected it afterwards, he and even his brother Harot Sasunyan are members of this organization. Therefore, a decision on the release of Hampig Sasunyan would reveal a situation that contradicts the own values ​​and especially anti-terrorism laws of the USA. It is inevitable that the release of a terrorist would create a terrorism-encouraging perception for terrorism in a period when countries are making collective efforts and serious operations against terrorism.

Another probable consequence is the possibility of the Sasunyan case setting a precedent for other convicts arrested for terrorist activities. In this respect, Governor Newsom needs to be extremely careful.