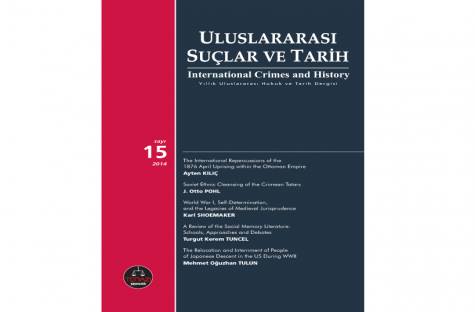 International Crimes and History (ICH) is an annual peer-reviewed journal dedicated to the study of inter-communal, inter-ethnic, inter-religious and international conflicts and crimes that took place in the past. For nine years of its publication, the ICH has been a platform for the scholarly investigation of conflicts and crimes registered in the Balkans, the Caucasus, the Eurasia Region, and the Middle East. The ICH is indexed in the Scientific and Technological Research Council of Turkey-Turkish Academic Network and Information Center (TUBİTAK-ULAKBİM).

With this special issue, the ICH will expand its coverage to topics related to Russian Imperial and post-Soviet spaces and its upcoming 16th issue will be devoted to the study of the Crimean Tatar history under Russian imperial rule and the USSR.

The Crimean Tatar experience under the Soviets was, too, proved to be a difficult one. Initially, the Soviets gave assurances for national self-determination and protection of Muslim religious rites to gain support of the masses. However, before long protection of national and religious life and the principle of self-determination were exchanged for the primacy of the establishment of the ‘Proletariat Dictatorship’. Soviet-style ‘Tatarization’ policies were renounced and that was followed by purges. The 1944 deportation of the Crimean Tatars destroyed completely the Crimean Tatar life in the Crimean Peninsula, while leaving thousands perished on the way and after arrival to locations of exile.

On the whole, for the Crimean Tatars the last two-centuries meant a long interval of exclusion, exile, discrimination and marginalization. The very recent events in Ukraine, particularly annexation of Crimea by the Russian Federation indicate that the fate of the Crimean Tatars is likely to be a complicated one.

Russian annexation of Crimea in 2014 has amplified the interest of the research community and policy-makers on the Crimean Tatars. However, interpretations on the fate of the Crimean Tatars following the crisis in Ukraine usually overlook the legacies of the Russian Imperial and Soviet pasts. Ignoring the legacy of the past partially conditioned by the absence of deep knowledge on the history of the Crimean Tatars results in imperfect analyses.

Based on this observation, we invite papers that focus on the history of Crimea and the Crimean Tatars between 1783 (annexation of Crimea by Imperial Russia) and 1991 (collapse of the Soviet Union) and examine legal, administrative, social, economic and political practices that have resulted in social, cultural and economic destruction of the Crimean Tatar lives. Reviews of recently published books on the subject are also welcomed.

For notes for contributors, see below.

Dr. Huseyin Oylupinar gained his interdisciplinary PhD degree in History and Cultural Studies at the University of Alberta in 2014.   Dr. Oylupınar was a guest researcher at the Ukrainian Academy of Sciences. He has been offered a fellowship in 2013 at the New Europe College in Bucharest to conduct a research on interethnic relations of Crimean Russians and Crimean Tatars in Crimea. He has been also a fellow at the Inter-Ethnic and Cross-Cultural Relations Research Center in Dnipropetrovsk–Ukraine (December 2014–June2015).

Currently, Dr. Oylupınar is a researcher a guest lecturer of International Relations at the Izmir University of Economics and starting from September 2015 he is assigned as the Mihaychuk Fellow at the Harvard Ukrainian Research Institute. His recent research examines Ukrainian-EU relations, Russian-EU relations, Ukrainian-Turkish Relations, the state of Crimean Tatars after Russian annexation of Crimea in 2014, and Crimean Tatars under the Russian Empire.

Dr. Turgut Kerem Tuncel gained his PhD degree in Sociology and Social Research from Università degli Studi di Trento in 2014. During his doctoral studies, he had been a pre-doc visiting scholar at Michigan University, Ann Arbor Armenian Studies Program. Dr. Tuncel worked as research/teaching assistant at Bilkent University and Istanbul Bilgi University between 2001 and 2009. He is currently an expert at the Center for Eurasian Studies (AVİM), an Ankara-based thinking-tank studying the current geopolitics of the Eurasian region.

- Manuscripts should be in English or in Turkish.

- Manuscripts should be 12 point font, Times New Roman, and 1,5 spaced throughout allowing good (1-1/2 inch) margins. Pages should be numbered sequentially.

- International Crimes and History adheres to the Chicago reference style.

- All manuscript submissions should include

- Short biographical note(s) about the author(s)

- Professional position(s) of the author(s)

- Current department and institutional affiliation(s) of the author(s)

- Full address(es)/phone(s)/fax details of the author(s)

- The Editors welcome the submission of manuscripts as Main Articles and Book Reviews.

- Main Articles should be 7,000–9,000 words including footnotes and bibliography. They should include an abstract between 150–200 words and 4–6 keywords (in alphabetical order, suitable for indexing. Ideally, these words should not have appeared in the title).

- There should be a clear hierarchy of headings and subheadings.

- Quotations more than 40 words should be indented from both the left and right margins and single-spaced.

- Author(s) or Editor(s) first and last name(s) of the book under review.

- Language of the book

- The editorial office will make every effort to deal with manuscript submissions as quickly as possible. All papers will be acknowledged on receipt by email.